Airstrikes catch up to displaced Aleppans in Idlib

Syrians who fled Aleppo years ago and settled in Idlib are on the run once again or fearing for their lives as the regime, backed by Russian air cover, intensifies its attacks in the province. 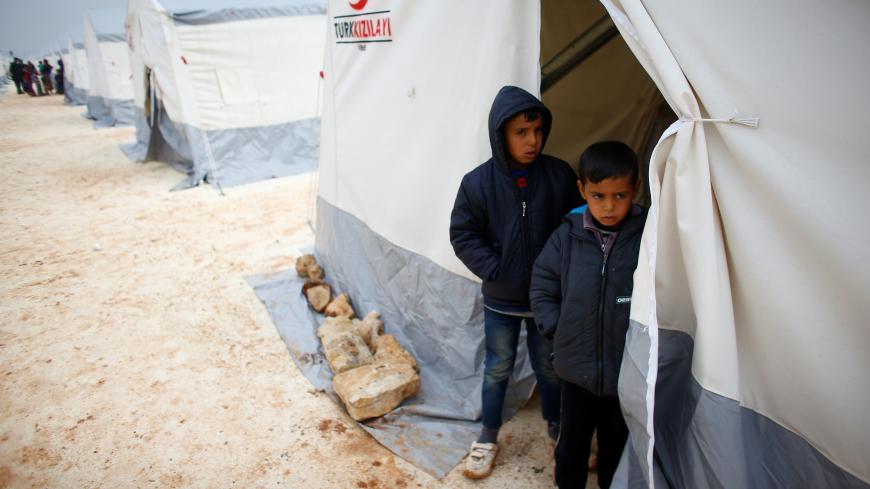 “What has been happening in Idlib province in recent weeks — and in Ghouta in the past few months — is exactly what we witnessed in Aleppo during November and December 2016,” Mohammed Shabeeb, a former citizen journalist from Aleppo city, told Al-Monitor Feb. 2. “The [Bashar] al-Assad regime, covered by Russian airplanes and Iranian militias on the ground, is trying to annihilate the governorate of Idlib by bombing the civilians, the hospitals, the markets … every sign of life.”

Shabeeb was studying English literature at the University of Aleppo but had to stop in his second year. Joining the demonstrations in his city to demand freedom and dignity, he was soon wanted by the regime forces and so could not finish his studies. “On Dec. 22, 2016, the regime displaced us from Aleppo and from that moment, I have lived in Idlib,” he continued. “Today I came to Saraqeb to see what was happening and to stand by the people close to the tragedy.”

The city of Saraqeb, located in Idlib province in northwest Syria, was one of the first to participate in the demonstrations against Assad’s regime in March 2011, in solidarity with the people of Daraa. Its strategic location, connecting the main roads of Aleppo-Damascus, Aleppo-Latakia and Aleppo-Idlib, means the regime has made great efforts to take control of the city, as is reported in detail in the book “The Story of a Place, The Story of a People,” compiled by the Creative Memory of the Syrian Revolution.

“When some civilians were trying to escape from Saraqeb by car, taking the Aleppo-Damascus highway yesterday, Russian airplanes targeted them and left seven civilians dead and many injured. The highway is often attacked.” Shabeeb covered the fighting around Aleppo over the past few years as a freelancer, but stopped writing when he left Aleppo.

“When I was displaced, I was disappointed about what happened to us, about the silence of the international community. I was feeling hopeless about what I was doing, thinking it’s useless communicating with the international media. The war will not end,” he said. As Shabeeb spoke to Al-Monitor, the sounds of bombs interrupted the conversation. Saraqeb continues to be under persistent, heavy attack. While many citizens have fled, one who signs his graffiti as Ali. K wrote on a Saraqeb wall after the Feb. 4 chemical attack on the city, “Saraqeb is the strongest. It is stronger than war planes and chlorine. It is stronger than napalm and fire.”

The fall of Saraqeb would cut the northern part of Idlib province off from its south, impeding displaced people from returning to their homes, Rasha al-Shahad told Al-Monitor in a phone interview. She said, “I am from a small village called Ghadafa, between Maarrat al-Nu’man and Jarjanaz, in southern Idlib province. My village is being hit every day, and all the people have left. My family and I are in Salqeen, at the Turkish border in the north.”

In her village, Shahad was a member of the women’s bureau of the local council and director of a women’s center called “Brightness of Tomorrow.” The bombs forced it to close on Dec. 29, 2017. “We used to have teacher training, professional classes for hairstyling, a nursery, a theater for children, campaigns against early marriage. … But now we don’t know if we will ever see our village again.”

Women's centers run by the nongovernmental organization Women Now for Development were destroyed in Maarrat al-Nu’man and Saraqeb in January, as well as in eastern Ghouta, where the regime continues to attack despite UN pleas.

Another former resident of Aleppo’s southern countryside who withheld their name for security concerns chatted with Al-Monitor online during the last few weeks of intense strikes. This person left almost three years ago for the small village of Tal Touqan and was injured and displaced again in the January strikes.

Working as a humanitarian activist to support the population since the beginning of the conflict in Syria, this person claims to be independent and not support any side. “But I can’t tell you where I am right now after having left Tal Touqan. The regime is advancing very quickly in the eastern countryside of Idlib and what remains of southern Aleppo’s countryside. It can enter at any moment and take revenge on those of who worked as activists in the field. I am afraid for my children.”

A person originally from Bab al-Hadid in Aleppo’s Old City who also spoke to Al-Monitor on condition of anonymity is working as a logistics officer for the Polish Humanitarian Aid organization, distributing humanitarian aid to Aleppo’s displaced in Idlib city, villages and towns. “The situation is very dangerous for everyone,” including aid workers, the officer concluded.