Can Aleppo’s displaced survive in Idlib? 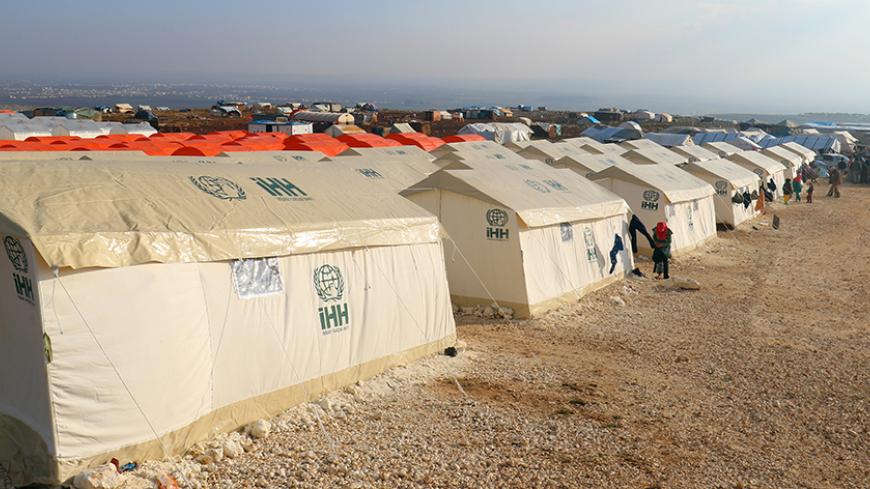 ALEPPO, Syria — Residents of eastern Aleppo who fled Syrian regime forces for western Aleppo and the Idlib area are suffering under tragic conditions. They are having a hard time finding places to live, given the thousands of displaced people and refugees flooding the areas. In addition, they can't find jobs under the harsh economic conditions prevailing in Syria as a result of the civil war that has plagued the country for six years now.

The International Committee of the Red Cross estimated that during just one week in mid-December, 34,000 people were evacuated from the eastern Aleppo area, many of them headed for Idlib. Thousands more were waiting to leave.

Idlib is about 35 miles southwest of Aleppo, far away from the clashes, and it is rarely targeted by warplanes and helicopters, unlike Aleppo’s northern countryside, which is witnessing fierce battles between the rebels and the Islamic State (IS) around al-Bab. The opposition-held western countryside of Aleppo also has been targeted by warplanes and artillery shells by regime forces.

Although Idlib was the safest choice, moving there did not solve the problems facing Aleppo residents who left their homes in hopes of starting a new life. Job opportunities in the small province of 6 square kilometers (2.3 square miles) are almost nonexistent for newcomers, especially since hundreds of thousands of Syrians have moved to the area during the past two years.

To make matters worse, the families who made it to the Idlib area cannot find places to live. There are nowhere near enough apartments for the wave of Syrians, and what few places might be available go for about $200 per month — far too expensive for those who fled their homes after being under siege for months.

“We are happy we were able to survive escaping Aleppo and the siege. However, at the same time, we ran away from one suffering and stumbled onto another," a refugee told Al-Monitor on condition of anonymity. "I have been looking for a place to live for 13 days and I have yet to find a place to shelter my family of five. If I ever find anything, the rent will be too high to be covered by a monthly salary — if I could find a job in the first place.”

He added, “I have spent a lot of time looking for a job, but to no avail. If anyone wants to work, they should have some sort of capital to start a small project to support themselves and their families. We newcomers find it even more difficult. We currently live on aid given to us by local relief associations, as well as some residents here. I really hope I can find a place for my family, and I wish to get a job so I would not remain dependent on anyone.”

Relief groups in Idlib province have been doing their best to secure housing, clothes and food for those coming from Aleppo, but find it hard to help so many displaced people.

"All relief associations have put all their efforts into finding shelter for all the displaced people, but we failed. We sometimes had to put two or three families in one house," Ammar al-Abdullah, who is in charge of relief campaigns for the nongovernmental organization Molham Volunteering Team, told Al-Monitor.

Many displaced people wish to cross into Turkey, but the borders have been closed since March 2015, and the dirt roads they used to take into Turkey are now completely shut down in light of the tight security on the Turkish borders. Many fear warplanes and helicopters might eventually bomb Idlib, as they did Aleppo.

Abdul-Qader al-Halabi, who fled Aleppo’s eastern neighborhoods and found refuge in Idlib, told Al-Monitor, “I did not expect to leave Aleppo alive. I have a daughter and wife who I want to protect now. Being in Idlib does not mean we are absolutely safe. The regime could launch a military campaign against Idlib at any given moment, and we do not want to go through hell again. I do not have the needed documents to cross into Turkey, and even if I did, the borders are closed and so are the smuggling roads."

He added, "God forbid Idlib encounters the same fate as Aleppo; people would not have anywhere else to go. This is the last city controlled by the rebels, and we hope the situation will remain calm because hundreds of thousands of Syrians from different provinces have settled here, despite how small the province is. I wish I could find a way to enter Turkey so I could finally look after my family, away from death and destruction.”