Why is Israel detaining a clown?

Circus artists around the world are protesting the arrest and detention of Palestinian performer Mohammad Abu Sakha. 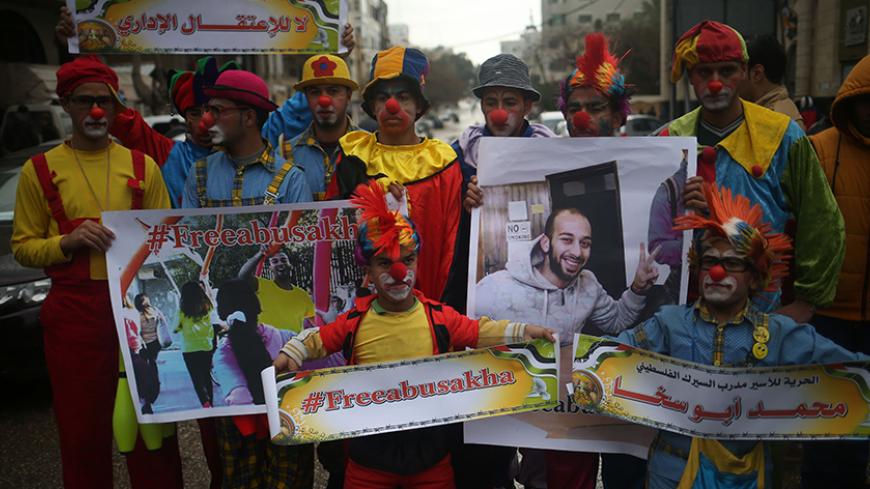 Palestinian clowns hold portraits of their colleague Mohammed Abu Sakha, who is imprisoned in an Israeli jail, as they demonstrate in solidarity with him in Gaza City, Feb. 8, 2016. - MOHAMMED ABED/AFP/Getty Images

Writing an article about a Palestinian prisoner held in Israeli administrative detention means walking a thin line. Such prisoners are detained by the Israeli security establishment without an indictment or a trial date. In some ways, this author is quite like the prisoner, his lawyers, his family and his friends. Neither he nor they know the reason for the arrest, or what intelligence was gathered against the suspect to lead the Shin Bet to conclude that he was involved in planning a terrorist attack. And there is an even more daunting question: Why did the authorities decide to use administrative detention, a controversial tool by any standard, rather than a more transparent criminal procedure, which would allow the courts to rule on it?

Over the past few years, I was asked on more than one occasion by my editors to interview and write about several notable administrative detainees, some of whom attained fame (or at least notoriety) because of their long hunger strikes. At the time, I had no real way of knowing if they were "ticking time bombs" with knowledge of an imminent terror attack, as the security forces claimed (and whose arrests could then be justified under international law as a last resort necessary to prevent an attack). The other option would be that Israel chose this tool because it lacked solid evidence, which would lead to an indictment and conviction in court.

The fact is that all of the administrative detainees who made hunger strikes over the past few years, including Khader Adnan in 2015, Samer Issawi in 2013 and Muhammad al-Kik in 2016, became heroes of the Palestinian struggle by forcing the Israeli authorities to reach an arrangement with them. And what a surprise! As soon as that happened, they were no longer considered security risks, and certainly not “ticking time bombs.” So were they really such a threat before their arrests?

Today, the administrative detainee in the international spotlight is Mohammed Abu Sakha.

Abu Sakha, 24, is unlike any of the other administrative detainees, who are now household names in Palestinian communities. He is not a political figure, not a cleric (like Adnan) and not even a journalist who is allegedly connected in some way or another to incitement leading to terrorist attacks (like al-Kik). Abu Sakha is a Palestinian circus performer, but the Shin Bet claims that he is also a member of the Popular Front for the Liberation of Palestine (PFLP). His friends think the idea is ludicrous, saying that the only group that Abu Sakha might belong to is the PFLC (Popular Front for the Liberation of the Circus). His friends and lawyers also point out that the security forces didn’t even have to search for him so that they could arrest him on the basis of accumulated intelligence. He was detained at a checkpoint in December, during a random spot check of the taxi he was in. Abu Sakha was removed from the cab and taken straight to administrative detention. He is still in detention now.

Abu Sakha is a bachelor who attended the Palestinian Circus School in Bir Zeit. He graduated and became a circus performer five years ago and took a position teaching at the school. He has since performed throughout the West Bank and overseas, and even worked with teens and adults with special needs. He was driving back to the school from his parents’ house in Jenin when he was arrested.

A representative of the Israeli security forces was reported to have responded, “Abu Sakha was arrested because of intelligence about his recent activities on behalf of the Popular Front. Given the risk that Abu Sakha poses to security in the region and the lack of any alternative, the Shin Bet’s recommendation to place him under administrative detention was relayed to the military commander of the region.”

His friends and colleagues at the Palestine Circus School told Al-Monitor that only after they learned that he would not be released any time soon did they decide to initiate an international protest. They are condemning what they call the arbitrary arrest of a circus artist who spends all his time learning, teaching, practicing and volunteering on behalf of the community. “The last thing anyone could attribute to him is a terrorist attack,” said one of his friends on condition of anonymity. “When would he even have time for that?”

Public protests against Abu Sakha’s detention have been gathering momentum every day. “It’s snowballing,” said another of his friends who did not want his name divulged, adding that dozens of circus performers around the world have been joining them every day to protest the arrest. “We approached circuses with whom we performed in the past,” he tells Al-Monitor. “Abu Sakha studied for a while with the Lido Center of Circus Arts in Toulouse. It immediately joined the cause.”

One thing that Abu Sakha’s friends have done is create a Facebook page where circus artists from around the world can post their creative protests. During street performances of pogo stick jumping or other acrobatic routines, they have all been raising signs that say, “Free Abu Sakha!” Some of them have also posted video clips from their own circuses. American recording artist David Rovics wrote a song about him, too: “He could have been a fighter, as so many others did. … Instead he joined a circus troupe to warm the aching hearts. Sometimes the hula hoop is the best way to play your part. And his only crime was making children happy.” Amnesty International has issued an urgent call for his release.

Israeli human rights activist Hanita-Caroline Handelman is one of the people leading the fight for Abu Sakha’s freedom. This week, she organized a demonstration by Israeli circus performers outside Megiddo Prison, where he is being held. “We put on a spontaneous show in the prison parking lot,” she told Al-Monitor. “It was funny to see the circus performers who came to demonstrate sending [juggling sticks] flying over the heads of the guards.”

During the demonstration, Handelman used a megaphone to apologize to Abu Sakha about the arrest. She told him that she wanted to visit him in prison, but that the Prison Service prevented her from doing so. “I want you to know that I didn’t come because they wouldn’t let me,” she said.

The organizers of the protest are now planning a huge demonstration by circus performers in London later this month. If Abu Sakha is not released after that, the protests are to spread to other capitals across Europe.

Given the nature of administrative detention, there is no way of knowing how serious the charges against Abu Sakha really are. Nevertheless, one thing is absolutely certain: If he does meet the definition of a “ticking time bomb,” if there is real evidence that he was involved in terrorism on behalf of the Popular Front, it would be best to charge him in a court of law, if only to avoid international protests. After all, these only damage Israel’s international reputation.