Palestinian journalist Muhammad al-Kik has been on a hunger strike for the past three months in protest of his administrative detention, and his life is now in real danger. 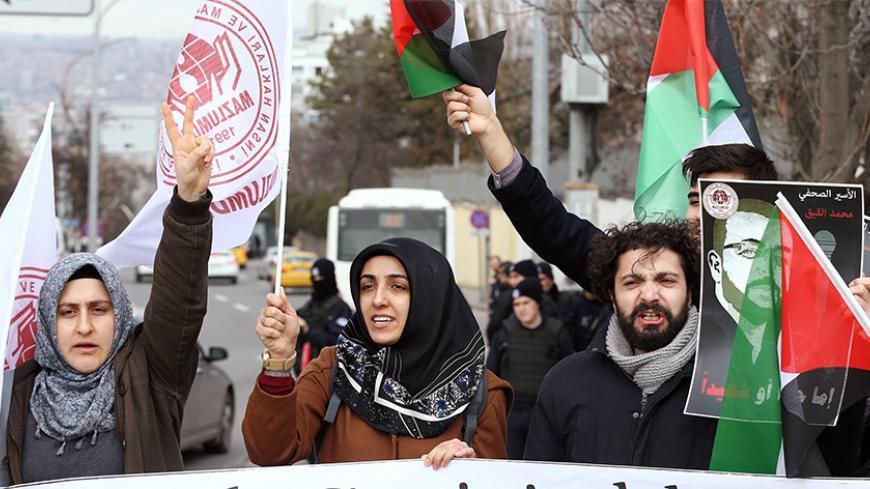 A pro-Palestinian group holds Palestinian flags and posters of Palestinian journalist Muhammad al-Kik as they stage a protest against Israel outside the Israeli ambassador's residence in Ankara, Feb. 12, 2016. - ADEM ALTAN/AFP/Getty Images

The room occupied by Palestinian hunger striker Muhammad al-Kik at the HaEmek Hospital in Afula has become a pilgrimage site for human rights activists. This is the first time that activists and journalists alike have had a chance to visit a hunger striker in his room to shake his hand and offer encouragement. Just outside, dozens of police officers guard the room, while security cameras cover every corner of the hospital’s internal medicine ward.

Al-Kik, a 33-year-old resident of Dura in the Hebron District, works as a journalist for the Saudi Almajd news network. Upon his arrest by the Israeli authorities on Nov. 21, 2015, he decided to use a hunger strike to protest his administrative detention. That hunger strike has been going on for more than 80 days now.

His attorney, Hanan Hatib, told Al-Monitor that his life is now in serious danger. All he drinks is water. Unlike Samer Issawi and other Palestinian hunger strikers, he refuses to take any salt or mineral supplements. He will not accept any medical care and refuses to even be seen by a doctor, fearing that it could interfere with his protest.

In a conversation with Al-Monitor, Kik’s fellow journalists in Hebron claim that the reason for his detention is his firm attitude toward Israel and the Palestinian Authority. As a reporter and lecturer, Kik lashed out regularly at the Palestinian leadership. Nevertheless, the Shin Bet claims that his activity as a journalist has nothing to do with his administrative detention. They say that he is a Hamas activist who has served time in prison for his activities, that he maintains contact with Hamas activists in Gaza and that he is still involved in terrorist activities through a student group aligned with Hamas at Bir Zeit University.

Once his health deteriorated and it seemed he would die, the Supreme Court decided Feb. 4 to suspend his administrative detention. “The court’s use of this particular legal term did not rescind the administrative detention but rather made it conditional on his medical state,” explained Hatib. “The court determined that Kik required intensive medical care and should therefore remain in the ICU of HaEmek Hospital. His family and friends could visit him there, not as a prisoner, but subject to normal medical instructions for visiting patients. The court also decided that once Kik’s condition stabilizes and he asks to be released from the hospital, he would have to approach the authorities, where he would have the right of appeal. The entire situation is absurd. Kik is not an administrative detainee, but he is not free either. The court released him, but there are still policemen right outside his door.”

Given these circumstances, Kik has decided to continue his hunger strike until the administrative detention order is lifted entirely and he is released from the hospital. Meanwhile, this unique legal situation makes it possible to keep Kik’s room open to visitors. “On one hand, visitors from across the country who regard him as a hero come to see him in his room. On the other hand, the ward has become like a military or police zone. On Friday, some 2,000 people participated in special Friday prayers for him [at the hospital]. They were [led] by Raed Salah, the leader of the Northern Branch of the Islamic Movement, which Israel recently outlawed,” said Hatib.

Ever since his condition deteriorated, there has been a wave of protests by human rights activists hoping to pressure the Israeli authorities to release Kik immediately. One of these activists is Anat Rimon Or, who lectures about the philosophy and sociology of education at the Center for Academic Studies in Or Yehuda and the Beit Berl College of the Arts. Rimon Or and another activist, Anat Lev, decided that they would also go on hunger strike. They began their strike Feb. 12 outside the official residence of Israeli President Reuven Rivlin, as a sign of solidarity with Kik. They also started collecting signatures on a petition that they hope to present to the president. It reads, “Your Excellency, Mr. President, we call on you as president of the State of Israel to intervene and save the life of the principled Palestinian journalist Muhammad al-Kik, and in so doing, to help strengthen democracy in Israel.”

On the petition, which has been shared over social networks, they also write that the State of Israel has effectively sentenced Kik to death because of his insistence on preserving the basic principles of justice and fairness.

Another activist, Hanita-Carolin Hendelman, launched a worldwide campaign in cooperation with international human rights organizations in an effort to make Israel end the practice of administrative detention.

Hatib was by Kik’s bedside during her telephone conversation with Al-Monitor. She described him as slipping in and out of consciousness. “He is in a suspended state; not just in terms of his legal status as a detainee/not a detainee. He is also suspended between life and death,” she said.

When asked if it was possible to speak with Kik, she said he couldn’t even use his voice. He can hear — he listens, but he can’t speak, his body is so weak. He usually communicates through gestures.

“Currently, all our efforts are focused on bringing about his release and saving his life,” said Hatib. “But as long as the state refuses to lift his administrative detention entirely, his condition continues to worsen, and the damage to his body is irreversible — so much so, in fact, that it poses a real threat to his life.”

In order to assess the state’s position and put the legal term “suspended” to the test, Kik’s lawyers have appealed to the Supreme Court with a request that he be transferred right away to a Palestinian hospital in the West Bank for further treatment.

The state responded to the petition by saying that it opposes the transfer of Kik to another hospital. He must continue receiving medical care in an Israeli hospital, where he can be kept under constant watch and control. On Feb. 15, when the court reviewed the petition, it proposed to Kik's lawyers that he be transferred to the East Jerusalem hospital of al-Mukassad, where Israel can continue to watch over him. Kik refused.

“It is obvious that the state is sentencing Muhammad al-Kik to death,” said Hatib. “This is sad.”