Why is Netanyahu ignoring legacy of late Mossad chief?

In a memorable speech delivered one year ago, late Mossad chief Meir Dagan stated that he fears the current leadership and its policy of diplomatic stalemate. 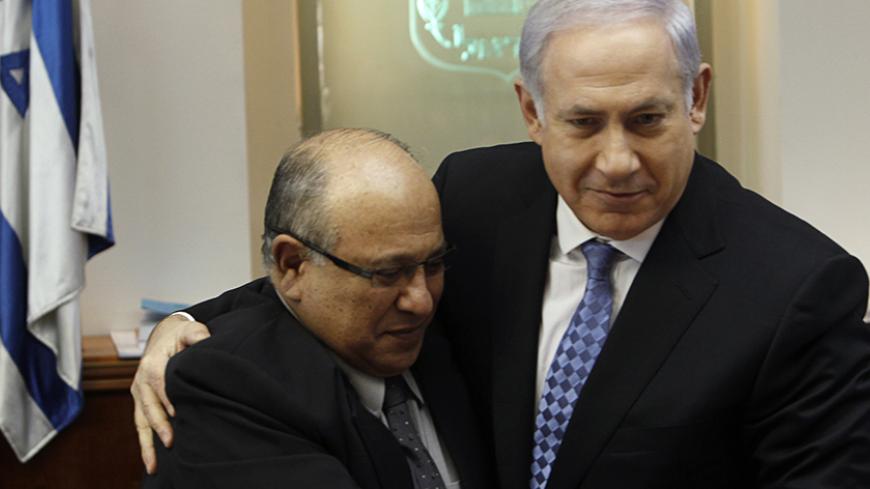 In the eulogy he delivered at the freshly dug grave of Meir Dagan, Prime Minister Benjamin Netanyahu recalled that 15 years ago Dagan, then head of the Mossad, had shared with him a dire prophesy. According to Netanyahu, the man who had for years devoted himself to the fight against terror said that the fight against “terror will continue for another 100 years.” The prime minister promised in his March 21 speech, “Just as we beat it in the past, we will continue and we will beat it in the future.” Netanyahu went on to praise Dagan and said he had been aware of the dangers of radical Islam and saw in Islamist zealotry a tangible threat that cannot be ignored.

Dagan was indeed aware of the threats facing Israel. He was not a pacifist, no Peace Now movement member. In his last speech, which he delivered at a March 2015 rally at Tel Aviv’s Rabin Square, Dagan said, “Israel is a state surrounded by enemies.” He agreed that one must not, under any circumstances, be sanguine about the regional threats, but was quick to add, “Enemies don’t scare me. I am concerned about our leadership. … I am scared by the lack of vision and loss of direction.”

His comments generated vicious invective from the political right. Yariv Levin, then the head of the Knesset Foreign Affairs and Defense Committee, said, “Meir Dagan’s irresponsible blabbering causes grave damage to the security of the state.” Levin accused the former Mossad director of being motivated by political interests, saying that his hatred for the prime minister had “blinded his ability to see things as they are.”

The man who devoted most of his life to safeguarding Israel’s security understood that the Mossad, the Shin Bet and the Israel Defense Forces have no solutions to a popular Palestinian uprising. Dagan, a retired general, was not the first senior defense official to doubt the ability of the strongest military in the Middle East to deal with stones and firebombs. Dan Shomron, the military chief of staff at the time the first intifada broke out toward the end of 1987, said, “One cannot fight against stones.” Shomron went as far as to hand his generals the book “A Savage War of Peace: Algeria 1954-1962” by historian Alistair Horne.

The book, published in Hebrew in 1989 by the Defense Ministry, describes the struggle of the Algerian national liberation front against the country’s French rulers, and the conflict between the government of Charles de Gaulle and the French settlers and generals who opposed a withdrawal from the French colony. Before then, the French politicians could not muster the courage to make a diplomatic move to end the bloodshed. Only Gen. de Gaulle’s ascent to power led to the start of prolonged negotiations with the rebels that ended in France evacuating Algeria and granting it independence.

Shomron, too, came under criticism for his heretical claim that there is no military solution to the Palestinian uprising. Even after his death, the settlers keep hounding him. Last July, Israel Harel, the former head of the West Bank settlement council, described Shomron’s comments at the time as ”quite a wretched statement to make, especially coming from the top commander.” In an article for Haaretz, Harel wrote, “When the chief of staff declares it’s not possible to win the war, the soldiers and commanders in the field lose all motivation.”

Some 20 years before that intifada of stones, during the war of attrition under the government of Prime Minister Golda Meir, Israel’s Film and Theater Censorship Board banned the screening of the highly acclaimed 1966 movie “Battle of Algiers,” directed by Gillo Pontecorvo. The censors explained that the movie could undermine public morale and kept it out of theaters for several years. In 1973, the Israeli public learned the hard way — through the deaths of 2,297 soldiers — the bitter lesson of excessive faith in military power, of arrogance and of the euphoria that followed the 1967 Six Day War.

These phenomena, according to Dagan, have been replaced by fear, despair and stalemate through lack of vision, loss of determination and absence of leading by example. The results, he warned at the rally held under the slogan “Israel wants change,” will be a bi-national or apartheid state in which Israel governs 3 million Palestinians. Either scenario, he said, would be the end of the Zionist dream. In other words, it would spell the demise of the Jewish state, which adheres to the principles of democracy while safeguarding the security of its citizens.

Dagan’s funeral was held the day after three Israelis were killed in an Istanbul terror attack. It is widely believed that the Islamic State operative who blew himself up in the heart of the Turkish city was not connected in any way to the Israeli occupation. Even if Israel vacates all the occupied territories and makes way for the establishment of a Palestinian state with its capital in East Jerusalem, more Israelis are likely to fall prey to suicide attacks and car bombs. As Netanyahu diagnosed in his eulogy, “In the ever-changing Middle East there are threats that must be minimized to the extent possible.”

The prime minister did not forget to mention that alongside the dangers there are also opportunities that must be explored. In this context, he extolled Dagan’s contributions during his term at the Mossad helm to the growing cooperation with Arab states. Dagan understood that the cooperation with pragmatic neighbors could help Israel minimize the terror threat. In his final days, Dagan also recognized the great opportunity for Israel presented by the 2002 Arab Peace Initiative, and with his remaining strength tried to promote a regional Israeli initiative.

In his final public speech, Dagan said Netanyahu had not led a single true move to change the face of the region or to create a better future. Just 10 days later, the citizens of Israel re-elected the man who promised them that they would forever live by the sword and only the sword.