After drowning in piles of trash for more than eight months, Lebanon is implementing a landfill plan rejected by civil movements amid concerns of the environmental, health and economic damages ensuing from this crisis. 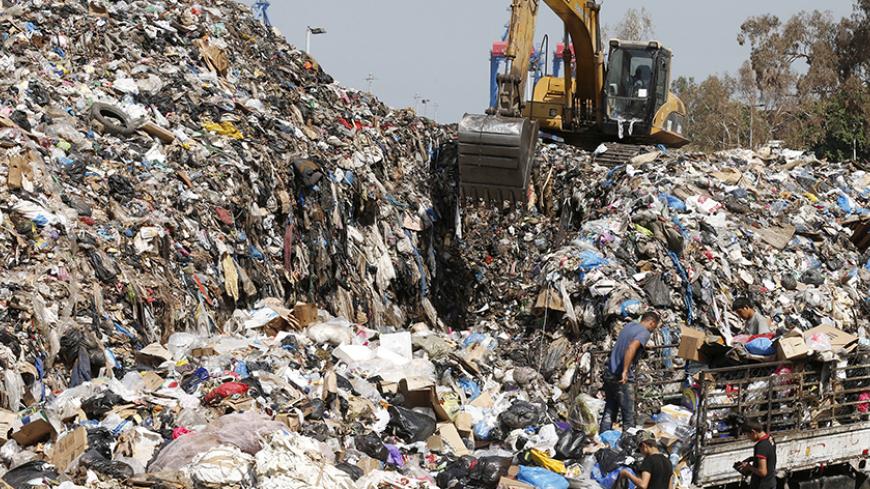 Men unload trash from a pickup truck at a temporary dump on the edge of the Beirut River, Lebanon, Sept. 23, 2015.

BEIRUT — A military escort accompanied garbage trucks to the controversial Naameh landfill over the weekend as they hauled some of the 8,000 tons of waste that has been collected from Lebanon's streets, local media reported.

Authorities reopened the dump as a temporary measure to rid the country's neighborhoods of mounds of trash that have accumulated since the landfill closed in July after protesters claimed it constituted a significant health hazard. People now fear the garbage-laden streets pose a more immediate threat of disease and environmental damage. Under the government's short-term plan, workers began removing piles of garbage March 19, The Daily Star reported, but the public is calling for a long-term solution.

The crisis began building in July 2015 when authorities closed the Naameh landfill, where all of Lebanon's waste had been dumped since 1991. Also that month, the government's contract with its waste-management company, Sukleen, expired. Sukleen continued to round up trash from street corners but did not treat it chemically. People began creating their own dumps on empty land and vacant lots. In February, Sukleen said it would have to stop collecting trash altogether because there was no place to put it.

Naameh residents had launched a campaign in early 2015 to get the dump closed in accordance with the Council of Ministers' decision issued in July 2014. Protesters staged sit-ins and blocked roads. Citizens launched a series of popular movements, notably the “You Stink” and “Badna Nhasib” (We Want Accountability) campaigns, as did a number of environmental organizations.

Meanwhile, the government set up a ministerial committee tasked with solving the trash crisis. On March 12, the government announced its temporary solution: to open three previously closed landfills for a four-year transition period, during which a sustainable plan will be developed and implemented.

The landfills — the Bourj Hammoud landfill, the Costa Brava landfill in Khaldeh, and the Naameh one — are being reopened to contain the tens of thousands of tons of piled-up trash. The government also plans to establish two additional landfills at locations that have yet to be determined.

It should be noted that Lebanese Prime Minister Tammam Salam has asked the security forces to follow up on the plan's implementation, because the civil society movement rejected the plan and announced that it would continue its actions. The civil society movement had proposed an alternative plan in September based on two main points: processing daily production of waste by sorting trash and providing money to municipalities, and treating the accumulated stockpile of waste using fermentation technology.

Minister of Environment Mohammed Machnouk told Al-Monitor, “Determining the environmental hazards of the proliferation of trash requires a detailed study, especially since between 760 and 800 makeshift landfills have been scattered across Lebanon since the outbreak of the trash crisis.”

He continued, “Everything can be treated if we quickly start implementing solutions. We made dozens of proposals months ago, but unfortunately these solutions were not politically agreed upon.”

In December, the government approved a plan to export waste. However, the proposal was scuttled because of various obstacles, rumors of shady financial transactions and scandals and allegations of fraud by the contracted company, Chinook. A number of political forces had previously rejected the option of exportation, most notably the Change and Reform bloc, because it believed it to be costly and not the best available solution.

Machnouk said he was surprised when a proposal for sanitary landfills was rejected, because that method is used globally. According to him, expanding the Costa Brava or Bourj Hammoud landfills would not violate the Barcelona Convention “or harm the sea, as some are alleging, since the state would construct a barrier to prevent waste from leaking into the sea.”

Lebanon Eco Movement President Paul Abi Rached told Al-Monitor that another idea, incineration, was not a good option. Some residents had taken matters into their own hands by burning trash, but were ordered to stop.

“The leachate contamination of soil and groundwater and the dioxin substance resulting from waste incineration are the biggest hazards ensuing from the trash crisis,” he said.

Abi Rached said it could be possible in the short term to reverse the damage from the past eight months by cleaning up the trash piles at various sites, or in the long term by letting nature do the cleaning, particularly in terms of groundwater.

According to the environmentalist, the solution adopted by the Lebanese government is unacceptable and might be a precursor to a business deal sought by some members in the government on this issue: “The government wanted to maintain the crisis for eight months in order to tame the people and monopolize the waste sector across Lebanon for the next 20 years, just like Sukleen has been monopolizing the trash sector in Beirut and Mount Lebanon throughout the past 20 years.”

Abi Rached said, “The landfills to be established on lands reclaimed from the sea violate the Barcelona Convention and reveal fraudulent intentions. According to the [reached] settlement, the municipalities will acquire ownership of the lands intended to host landfills. These lands may be [part of a] deal that generates a lot of money if they are resold along the lines of what happened in Beirut.”

He added, “The civil society movement does not have any clear plan to confront the government solution, but certainly we will not surrender in the face of the project to loot the Lebanese people’s money.”

Ateka Berri, head of preventive medicine at the Ministry of Health, told Al-Monitor that while the health implications of Lebanon's trash problem might not be obvious immediately, the long-term health effects could be significant.

"The trash crisis is a comprehensive national matter. But the health aspect may be the most dangerous one since the outcomes will not appear in the near future. The current talk about the proliferation of germs is just a drop in the bucket of what lies ahead if the crisis continues. Within a few years to come, serious chronic diseases will appear such as cancer, renal and hepatic impairment, Alzheimer's and congenital deformities,” she said.

“The hazard posed by the trash crisis is cumulative, but the Ministry of Health does not have the capacity to measure the most serious index, which is the dioxin substance index. During waste incineration, carcinogens in the air increase by at least 2,300%, according to the findings of a study from the American University of Beirut (AUB)." The Ministry of Health would need AUB's help to evaluate samples of air, soil and water to check the dioxin levels, she said.

Berri added that one positive action taken is a project that is underway to train municipalities to sort waste and to establish waste-sorting plants.

The trash crisis has left its mark on the tourism sector as well. Minister of Tourism Michel Pharaon told Al-Monitor that tourists’ reservations and spending dramatically plunged in the summer of 2015: “After a record high in July 2015 exceeding the rate registered in 2014 by 50%, tourists’ spending dropped by 35% at the onset of the trash crisis and with the start of civil society street movements that turned into a chaotic movement." Pharaon hopes for a promising 2016 summer season, especially now that the trash crisis solution has come into force.

The cleanup has begun in Lebanon’s streets and neighborhoods, but the civil movement is still keeping an eye on the government to monitor its commitment to find solutions to this crisis over the long term.