How a landfill poses danger to Beirut flights

Although the Costa Brava landfill, which is in close proximity to Lebanon’s only airport in Beirut, was closed, seagulls attracted to the waste pose a major threat to planes, while the government has yet to find a final solution to the two-year trash crisis. 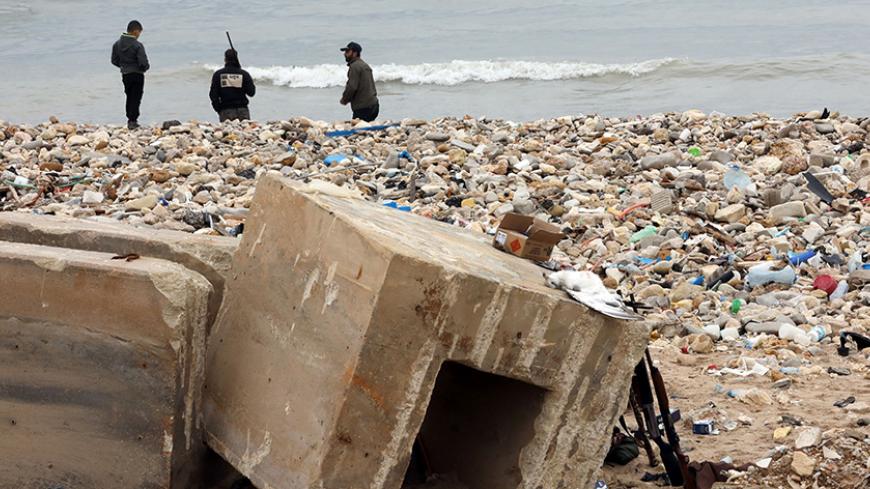 Hunters shoot down seagulls that are attracted to the trash at the Costa Brava landfill, near Beirut's Rafik Hariri International Airport, after warnings that the birds were threatening aircraft safety, Beirut, Jan. 14, 2017. - ANWAR AMRO/AFP/Getty Images

On Jan. 11, Judge of Urgent Matters Hasan Hamdan ordered the temporary closure of the Costa Brava landfill located only 167 meters (0.1 mile) from Rafik Hariri International Airport in Beirut. The landfill could lead to possible aviation accidents because of the seagulls attracted to the waste.

The Costa Brava landfill has been temporarily closed as the operator of the landfill, Jihad Arab, was formally notified to abide by the judge's orders. On Jan. 11, new Minister of Public Works Youssef Finianos told reporters that he recognized the “danger the birds pose to the civil aviation movement,” and said that the problem of Ghadir River's high pollution near the dump site will be dealt with.

On Jan. 10, an accident happened when a plane encountered a large flock of birds during landing, leading to the closure of the western runway of the airport until the issue of birds is resolved. Prime Minister Saad Hariri asked for an immediate addition of ultrasonic bird repellers at the airport, although the ones already there proved not to be efficient as the birds got used to them.

Lebanese blogger Elie Fares, in order to express the risks at stake, referred on his blog post titled “A separate state of mind” to the recent film “Sully,” which tells the story of Chesley Sullenberger, the pilot forced to land his plane on the Hudson River on Jan. 15, 2009, after striking a flock of Canada geese that disabled the engines.

In August 2016, the Lebanese Pilots' Union had already warned of the danger concerning birds near the Costa Brava landfill, which could fly into the planes' engines.

Four years to find a long-term solution to the waste management crisis in Lebanon is the goal the government by default set more than eight months after the closure on Aug. 17, 2015, of the Naameh landfill that received garbage from Beirut and Mount Lebanon for 20 years. In April 2016, two landfills were opened in Bourj Hammoud (northeast Beirut) and Choueifat's coastal Costa Brava area (south Beirut), in order to receive waste in the meantime. Around 1,200 tons have been received daily by the Bourj Hammoud landfill since its opening in an area very close to residential locations and the sea, and at the exact spot of the former uncontrolled dump site used during the civil war as a legal landfill, which closed by a government decision for exceeding its capacities in 1997.

Jad Chabaan, an associate professor of economics at the American University of Beirut, criticized the situation, telling Al-Monitor, “We don't know for sure the environmental and health impacts these two landfills will have; the [previous] Minister of Agriculture [Akram Chehayeb] just assumed that these zones are already polluted anyway.”

He added, “Costa Brava's landfill is only 167 meters from the airport, which can cause serious risks for planes. We just created a new problem to solve an old one; this is in addition to municipalities burning waste in the streets, waste finding its way to the sea and toxic waste abandoned in nature.”

The environmental impact assessments conducted by the United Nations Environment Programme for Bourj Hammoud and Choueifat's landfills in 2004 have not been renewed since then. “The decision to open landfills there was based on the theory that these areas [Bourj Hammoud and Choueifat] are already polluted,” Sawsan Bou Fakhreddine, a consultant of the former minister of agriculture, told Al-Monitor.

In Bourj Hammoud, Karnig Asfahani, an Armenian activist, told Al-Monitor, “This area has been affected by pollution and waste for more than 30 years; yet now things are getting worse. People who live close to the landfill face health problems. We see children with skin problems and people do not have enough money to move to another area. This landfill also affects Dora, Jdeideh, Zalka and a lot of other areas in the Metn district. The garbage is being burnt in every area in Metn and Keserwan, close to schools and buildings.”

To compensate for the acceptance of the waste, and until a proper solution is found, the government is giving $8 million a year to the municipalities affected by the presence of a landfill: Bourj Hammoud, Bauchrieh-Jdeideh, Choueifat and Khalde.

Despite the decision to close the Costa Brava landfill, the Council for Development and Reconstruction issued Jan. 12 a statement denying that birds are attracted to the site and pose a danger for aviation. On Jan. 13, a source at the airport in Beirut told The Daily Star that two additional ultrasonic devices have been installed, bringing their number to six, and that eight more would be set up in the next 10 days.

Another solution was found in hiring “experts” to kill birds around the airport, several Lebanese bloggers and environmental associations reported Jan. 14. These are all temporary and cruel solutions for a major problem that has to be addressed urgently by the new government, as it could affect the only way of going to and leaving the country.