The Lebanese Cabinet has requested a study on the possibility of expanding the Costa Brava and Bourj Hammoud landfills, which were intended to be temporary but filled before their time. 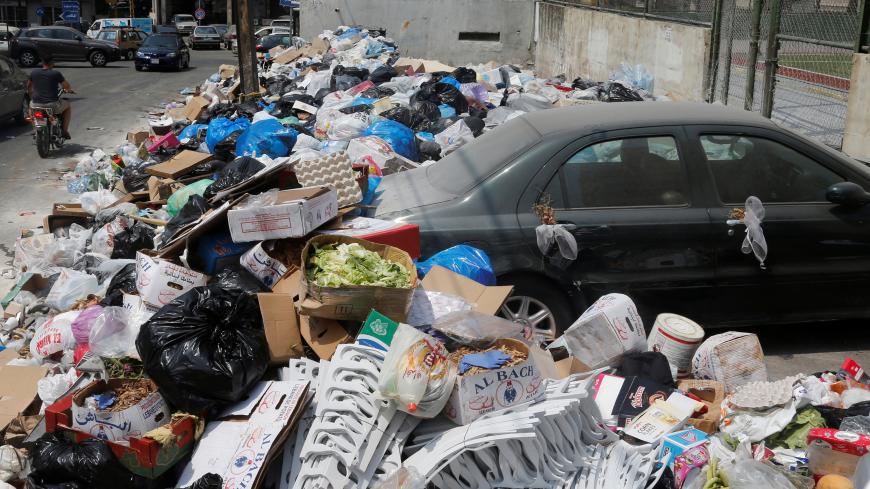 A car is blocked by garbage piled up along a street in the Dekwaneh area of Mount Lebanon, Lebanon, Aug. 29, 2016. - REUTERS/Mohamed Azakir

Although two years have passed since Lebanon's waste management crisis reached a head in 2015, the problem is ongoing. On Oct. 26, the Cabinet asked the Council for Development and Reconstruction to prepare a study on the possibility of expanding the Costa Brava and Bourj Hammoud temporary landfills. The Cabinet also raised the option of incinerators again in the same session. Activists, however, condemned such a short-term plan and expressed concern about the risks of using incinerators as a long-term solution.

The council is now required to conduct a study on the expansion of the Costa Brava and Bourj Hammoud landfills south and northeast of Beirut, respectively. These landfills were opened as part of a four-year plan to resolve the waste management crisis in Lebanon in April 2016, eight months after the closure of the Naameh landfill, where garbage from Beirut and Mount Lebanon was dumped for 20 years.

Landfills do not offer a long-term solution, as they already cannot handle Lebanon’s waste, estimated at around 4,000 tons a day. These two landfills were not subjected to an environmental impact assessment and were supposed to remain in operation for three and a half years. Nevertheless, they are already reaching their maximum capacity, two years earlier than anticipated. The large flocks of seagulls attracted to the waste of the Costa Brava landfill pose a danger to the neighboring airport. Garbage intended for Bourj Hammoud has been dumped in the sea since summer 2017.

The civil society group Beirut Madinati stated Oct. 27 that the Cabinet’s move lacked vision and a comprehensive strategy. “For us, it is another way to escape the problem, and to avoid dealing with it as it should,” Beirut Madinati member Zeina Abla told Al-Monitor. “The government wants to expand the landfills to avoid the recurrence of the 2015 crisis right before parliamentary elections” expected in May 2018, she said.

“It would be better to solve the problem from its roots, namely the amount of waste,” Abla went on. “We could compost, because half of our waste is organic, and most of the rest can be easily recycled or reused, once there is greater awareness and sorting. It [should be] easy to propose a basic waste management system that would be less risky to public health and less expensive.”

A number of recycling initiatives suggested by associations, individuals and companies suggest that the Lebanese people, at least in Beirut, are ready for waste sorting and recycling. It would be more efficient than landfills and incinerators, holds Beirut Madinati. “Yet we lack a legal framework, technology and funds” for operating incinerators, Abla told Al-Monitor. “Incinerators require special landfills to dispose of toxic ash.”

Economist and social activist Jad Chaaban said he was not surprised at the move, because this is how the issue has always been handled. “The Naameh landfill was opened as an emergency dumpsite for four years and was renewed four times in 20 years,” Chaaban told Al-Monitor. “These two landfills were opened to keep the people quiet, and the government now has no choice but to expand them because they are full. At the same time, they are not planning on reducing waste volume.”

Chaaban feels that Lebanon's leaders see the waste issue as a simple disposal problem and see no benefit in focusing on recycling and reducing the volume of waste at the source. “We prefer to pay a private contractor, Jihad al-Arab, around $160 per ton of waste transportation and disposal, so garbage doesn't pile up in the streets before the elections,” he added. “For me, it is another blackmailing attempt. If the people protest and close the landfills, garbage will fill the streets. For example, no solution was made for the Chouf region. In the long run, [the people] could be pressured to accept an incinerator as a solution.”

According to Chaaban, if the people demand a better system and protest, there could be a repeat of 2015, when garbage piled up in the streets after people blocked the road to Naameh. A new company, Jihad al-Arab, won the tender for handling garbage in Beirut and Mount Lebanon over Sukleen, and prices have increased further.

Environment Minister Tarek Khatib submitted a plan to use thermal decomposition last August to the council of ministers.

"Once this process [studying the use of thermal decomposition] is over, both landfills [could] be permanently closed and a recommendation will be forwarded to the council of ministers for an appropriate decision," the minister declared in April. But the Cabinet did not examine his plan.

"I saw this proposal; 80% of it was good,” Paul Abi Rached, president of the environmental organization TERRE Liban, told Al-Monitor. “It was about recycling and composting. He suggested transforming waste into refuse-derived fuel, which is obtained from burning waste as an energy source, instead of [filling] the landfills. The government had two months to discuss this important matter but instead, landfills are being kept and incinerators could be built." Abi Rached said this approach serves business interests because filling the sea leads to new land reclamation. “This is what happened with the Normandy landfill, which turned into BIEL. However, this would cause another environmental problem, with each truck of trash requiring several trucks of soil to be buried out of sight.”

The activist shared with the European Commission an idea to reduce the volume of Lebanon's waste in six months, but will have to wait for a new government to be formed to submit it. Former Prime Minister Saad Hariri’s resignation resulted in the suspension of all political work, including any possible progress on Lebanon's trash.