Why Lebanon may be closing this naval base

The construction of a tourism project at the port of Beirut requires removing a Lebanese army naval base. 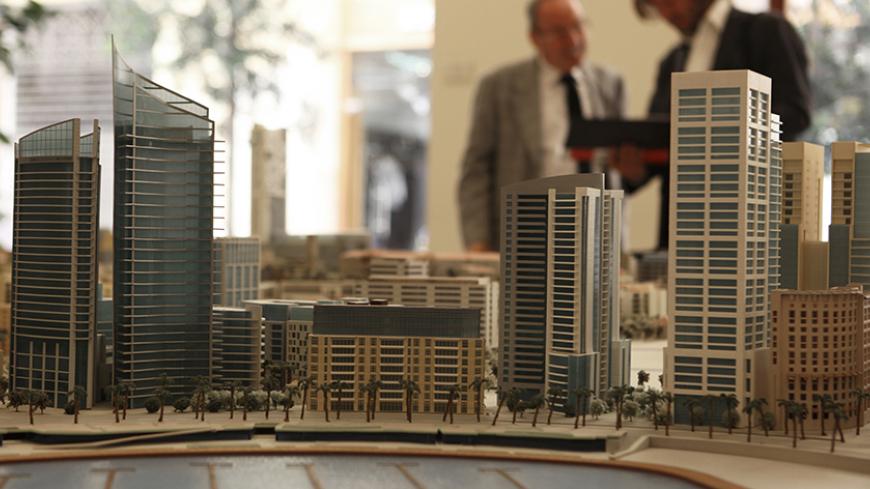 An employee of Lebanon's biggest company and real estate firm, Solidere, shows a journalist a model of Beirut's Solidere development at their office in Beirut, Sept. 25, 2009.

There are only two Lebanese army naval bases in the country. The first is located at the port of Beirut, and the second is in Jounieh, 20 kilometers (12.5 miles) from the capital. The Beirut Naval Base, which is part of the first basin of the port of Beirut, is the country's largest and main naval base. It is at risk of destruction due to the construction of a large tourism project.

The first sign pointing at the project’s implementation is the creation by the Beirut Port Authority of a new entrance to the first basin. The current entrance is known as al-Bawaba al-Shamiya. Since 1996, real estate plot No. 1506, which includes al-Bawaba al-Shamiya, has been the property of Hariri-owned Solidere, the company founded in 1994 to reconstruct the Beirut central district following the 1975-1990 civil war. Plot No. 1506 is adjacent to plot No. 1501 — the location of the naval base.

The project’s engineering drawing shows the establishment of a yacht club, stretching from the first basin, which includes plot No. 1506 and No. 1501. Alarmingly, plot No. 1501 has been the property of the Phoenicia Village, a project developed by the Kuwaiti Levant Holding Company that invested in 2006 more than $1 billion in the development project in the Beirut central district.

Phoenicia Village purchased plot No. 1501 from Solidere, which is now seeking to restore it.

The project’s development requires that the army evacuate its strategic base. Yet why was a military base built on private property?

The documents show that Phoenicia Village acquired the base on Oct. 10, 2007, at the end of the term of former President Gen. Emile Lahoud, during the crisis of the Cabinet, led by then-Prime Minister Fouad Siniora. The crisis was ignited on Nov. 11, 2006, following the resignation of Shiite ministers affiliated with Hezbollah and the Amal Movement and then-Environment Minister Yacoub Sarraf, who was aligned with Lahoud, after the issue was raised on the establishment of the Special Tribunal for Lebanon in Rafik Hariri’s assassination, while it had not been on the Cabinet’s agenda.

On that day, Lahoud delivered to Siniora a formal letter saying that the government is now considered unconstitutional and illegitimate, due to the resignation of ministers of the same sect (Shiites), and stressing that all of the government’s sessions and decisions taken following the resignation are deemed null and unconstitutional, including the purchase of plot No. 1501.

Speaking to Al-Monitor, Lahoud explained that he had refuted and refused to sign all of the decrees issued by the illegitimate government in 2007. He said that former President Michel Suleiman signed them, after he was elected president in 2008 following the Doha agreement.

Lahoud added, “The Beirut Naval Base crisis is not new. It dates back to the early 1990s when late Prime Minister Hariri led his first government.”

Back then, Lahoud was the commander in chief of the Lebanese army. He said, “Hariri offered me to give up to Solidere the military stations and positions located in the area stretching from ​​the first basin of the port of Beirut to Ramleh el-Bayda, including the Naval Base, Military Club and a plot of land facing it in Raouche.”

Lahoud added, “Hariri had attached to his offer maps of a huge tourism project that would attract international attention. It would be primarily a yacht club that he described as the largest in the Middle East.”

In exchange for abandoning military positions in Beirut, Lahoud said, “A military naval base will be established in Dbayeh and will be three times larger than that of the port of Beirut.”

Lahoud had rejected Hariri’s offer, “because the Beirut Naval Base is of a great strategic importance related to Lebanon’s national security.”

He said, “The removal of the Beirut Naval Base is the first step in the [tourism] project’s implementation, which will threaten the sustainability of import and export activities via the port of Beirut. This is true particularly since it is the major commercial gateway to Lebanon, and [its removal] will prevent large commercial vessels from entering the port of Beirut for their safety.”

He added, “The closure of al-Bawaba al-Shamiya will have a negative impact on the movement of the Lebanese army’s and UNIFIL’s [United Nations Interim Force in Lebanon’s] military vessels that are moored to a dock at the first basin.”

Former Minister Salim Jreissati, a former member of the Constitutional Council that follows up on the matter, told Al-Monitor, “The owners of the tourism project have missed that Decree No. 4147 of July 14, 1981, requires an empty space around any military facilities to guarantee their safety and operation. The Beirut Naval Base is one of these facilities and, therefore, the base or any part of it shall not be removed.”

Jreissati said, “Siniora’s illegitimate government suggested in 2007 a dangerous circumvention and violation of the law, which consists of switching the classification of plot No. 1501 from being a public property to a private property and transferred its ownership to a private company.”

He pointed out that “Phoenicia Village and Solidere lodged a lawsuit against the Lebanese army in 2010 requiring the military to evacuate the Beirut Naval Base. The lawsuit has been pending since then before the Court of First Instance in Beirut.

“A single solution is available for the army. It requires that the commander in chief of the army, Gen. Jean Kahwaji, makes the decision to confiscate the Beirut Naval Base — under confiscation law No. 550, issued on Oct. 20, 2003 — to the advantage of the Lebanese army, in exchange for a financial compensation to Phoenicia Village, particularly since the decree to transfer the ownership of plot No. 1501 is initially null and is no longer valid as a result of the expiry of constitutional and legal deadlines to challenge decrees.”

Between the importance of the Beirut Naval Base to national security and Phoenician Village ownership of the real estate area, the question is how will this dossier be resolved, particularly since the Beirut Port Authority had made a decision that al-Bawaba al-Shamiya would be closed starting March 28.

However, Jreissati noted, “The latest information available confirms that the closure has been suspended until further notice.”