Could Assad end up in court?

As the Special Tribunal for Lebanon in The Hague starts to hear testimony from several high-level Lebanese politicians, it's likely that evidence linking the assassination of Rafik Hariri directly to Syrian President Bashar al-Assad will come to the surface, involving Assad directly in the trial. 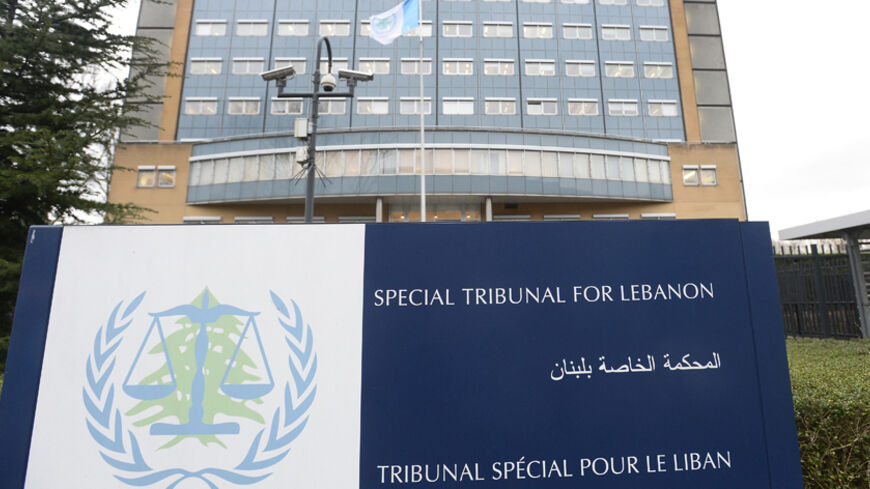 A view of a sign on the exterior of the Special Tribunal for Lebanon in The Hague, The Netherlands, Jan. 16, 2014. - REUTERS/Toussaint Kluiters/United Photos

The media in the coming week will undoubtedly focus on the Special Tribunal for Lebanon (STL) in The Hague, in light of the testimony of Lebanese political figures as witnesses, and more importantly the insinuation of a link between the defendant’s cellphone lines and senior Syrian officials, whose names, according to Lebanese Interior Minister Nohad Mashnouk, may include Syrian President Bashar al-Assad.

The lawyers of the five defendants who are being prosecuted by the international tribunal in absentia — after the Lebanese and international authorities failed to find them and bring them before the special tribunal, which was established under UN Security Council Resolution 1757 on May 30, 2007 — anticipate a correlation between the expected testimonies and the cellphone line links.

On Nov. 17, the first high-level politician who appeared before the judges as a witness — and is expected to be questioned for at least the next seven days — is Marwan Hamadeh, Lebanon’s former minister and current member of parliament. Hamadeh was a friend of late Lebanese Prime Minister Rafik Hariri. He was also subject to an assassination attempt when a car bomb exploded as his car was passing by in Beirut on Oct. 1, 2004. He miraculously survived the assassination attempt that took place four months and 13 days before Hariri’s assassination on Feb. 14, 2005.

Hamadeh’s testimony is expected to focus on the political atmosphere that prevailed during that period and the tense or hostile climate that had ruled the relationship between Hariri on the one hand, and Lebanese or Syrian parties on the other. It's also expected that the prosecution will ask Hamadeh to explain his testimony, which was included in the report issued on Oct. 20, 2005, by German prosecutor Detlev Mehlis, who headed the UN inquiry into Hariri's assassination. Mehlis quoted Hamadeh as saying that Hariri received a direct threat from Assad during their last meeting on Aug. 26, 2004, in Damascus. Hamadeh told the international investigator: “The day Mr. Hariri met with President Assad, I was meeting at Mr. [Walid] Jumblatt’s residence in Beirut, with Bassem Sabaa and Ghazi Aridi. We saw that Mr. Hariri’s motorcade was back by 1 p.m., which meant that the meeting in Damascus was pretty short. We saw Mr. Hariri who looked tired. He was sweating. He told the four of us that President [Emile] Lahoud was to be re-elected or ‘he will have to pay a high price’. … He reported President Assad saying to him, ‘I will break Lebanon on your and Jumblatt’s heads.'”

The indictment, which was issued on Jan. 17, 2011, neglected Hamadeh’s testimony as well as all previous similar testimonies that were trying to implicate Syrian parties in the crime. The indictment, which was reaffirmed on June 28, 2011, has only accused four Lebanese, to which a fifth Lebanese was added, without any reference to any implication of Lebanese or international political parties, by virtue of the recitals of the indictment.

Nevertheless, the correlation between summoning Hamadeh to give his testimony before the tribunal and the talk of an attempt to implicate Syrian parties became clear during the Nov. 14 STL hearing. One of the defense attorneys expressed his objection at the performance of the prosecution and accused it of trying to mislead the defense. The attorney himself asked the tribunal a direct question: “Is the prosecution going to name Bashar al-Assad and Rustom Ghazaleh? And when are the new names going to be added to its indictment?”

A source linked to the defense attorneys, who spoke on condition of anonymity, told Al-Monitor that this question, which was posed by the defense attorneys, came in response to information they now have on the prosecution's intention to amend the indictment, expand the scope of the defendants and move from an individual to a political accusation, which is not permitted under the current indictment.

The source told Al-Monitor that they have information saying that the prosecution is preparing to include in the case the names of Assad and possibly other Syrian officials. This is against the background of claims that there are special Lebanese cellphone numbers — which have six similar digits — that the prosecution will try to say were offered by the Lebanese authorities to the Syrian president at the time. They will claim that there was at least one call made by one of the phone numbers, which is suspected to belong to one of the defendants, to the mentioned special number. The source linked to the defense attorneys added that the theory of the prosecution and defense is based on the location data between multiple cellphone lines. None of the suspicious lines have been proven to legally, under any official records or registers of any commercial or government parties, belong to any of the defendants being prosecuted in absentia.

On the other hand, Salim Jreissati, a legal expert and former Lebanese minister, told Al-Monitor that the prosecution has the competence to amend the indictment upon which the trial is based. This is what makes the tribunal “special,” in terms of the way it was established and its rules of procedure and evidence. Yet, such a move would certainly mean the return to square one, 10 years after the crime was committed.

Regardless of the legal and factual possibilities, it remains certain that this week the hearings in The Hague will restore the glow they had lost a few days after the start of the trial last Jan. 16.