Ten years following the withdrawal of the Syrian army from Lebanon, many of the Syrian security officers who once ruled Beirut are now slowly disappearing within Syria. 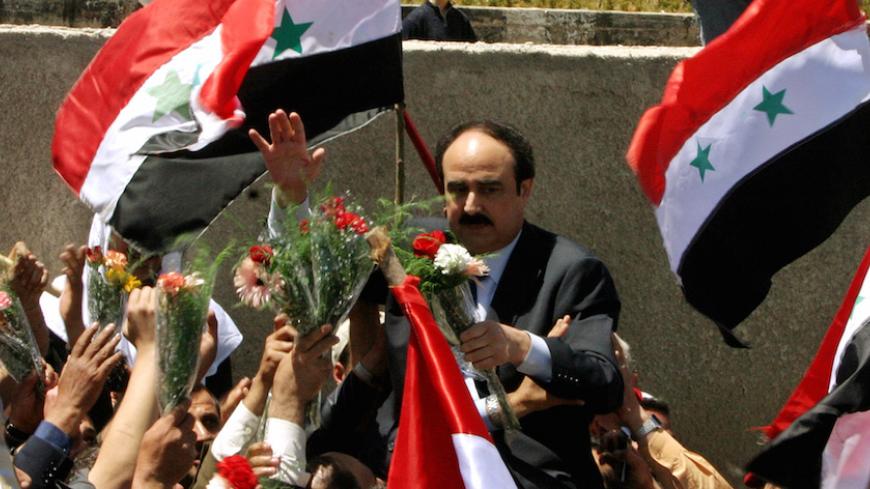 It seems that a curse has befallen the Syrian intelligence officers who took up posts under the Syrian tutelage in Lebanon from 1990 to 2005. Ten years following the withdrawal of the Syrian army from Lebanon on April 26, 2005, a series of tragic events has befallen these security officials. One by one, their names have been struck off the "Lebanon’s Syrians" list. Most recently, Rustom Ghazaleh was pronounced dead in Damascus on April 24. His death came weeks after news of a mysterious accident in February, involving his beating and torture at the hands of a Damascus intelligence branch.

Ghazi Kanaan was the first to be struck by the “Lebanese curse.” He came to Lebanon in 1984 as head of Syria's security apparatus in Lebanon, assigned to the post by the late Syrian President Hafez al-Assad. Not long after the Syrian army took full control of Lebanon in the fall of 1990, Kanaan became the de facto ruler of the Lebanese Republic. He would suggest a candidate for Lebanon's presidential elections, and impose ministers, members of parliament and public administration employees. He continued to have full rein over Lebanon until his superiors moved him from Beirut to Damascus in October 2002.

At the time, Lebanese officials bade him farewell as if he were the head of state. The Lebanese president awarded him the Medal of the National Order of the Cedar — an honorary title only awarded to heads of state — while Prime Minister Rafik Hariri presented him the “Key to Beirut,” an exceptional move reserved for visiting foreign heads of state.

In Damascus, Kanaan’s influence in Lebanon declined as that of his Syrian successor, Rustom Ghazaleh, rose. But Kanaan maintained good relations with some of Lebanon’s politicians, whom he had appointed to positions of power during his time in Lebanon.

However, following the assassination of Hariri on Feb. 14, 2005, and the withdrawal of the Syrian army months later, rumors circulated that Kanaan, Ghazaleh and other Syrian officials, including Jameh Jameh, were suspected of being involved in Hariri’s assassination. Jameh, a Syrian colonel, was in charge of the Syrian intelligence branch in Beirut when Hariri was assassinated.

The UN Security Council’s Independent International Investigative Commission listened to Syrian security officials’ testimonies in Damascus on Aug. 20, 2005. On Sept. 21, 2005, in Damascus, the UN commission again listened to the testimonies of Jameh, Ghazaleh and Kanaan, among others. Despite the media hype surrounding the interrogation, the Syrian leadership kept silent until the morning of Oct. 12, 2005, when Kanaan broke the silence in a telephone interview from Damascus on the Lebanese radio station Sawt Lebnan.

Kanaan denied all accusations that he was somehow involved in the assassination. He insinuated to the interviewer that this might be the last time he would ever speak of the subject. A few hours later, Damascus announced that Kanaan had shot himself in the head and died on the spot in his office.

Jameh was yet another Syrian intelligence officer struck by the “Lebanese curse.” He was Ghazaleh’s assistant in Lebanon. As Ghazaleh replaced Kanaan in Lebanon, Jameh took charge of the country's security apparatus, which later triggered accusations against him in the Hariri case.

The UN commission further ordered Jameh and Ghazaleh to testify alone during an interrogation session in Vienna on Dec. 6, 2005. Upon the completion of the investigation, the Special Tribunal for Lebanon issued an indictment, whereby no accusations were made against Jameh or any other Syrian officer.

Nevertheless, the “curse” continued to haunt Jameh, who was later appointed military chief in the remote area of Deir ez-Zor in eastern Syria.

There had been no news of Jameh until October 2013, when reports surfaced that he had been killed during a battle in the ongoing Syrian war. Jameh was said to have been leading an attack against the armed opposition near the Iraqi border.

As for Ghazaleh, he had been Syria’s No. 1 man in Lebanon from October 2002 until his departure in April 2005. Afterward, he was appointed head of Damascus' most prominent security division, the Political Security Division.

This year, on March 6, Arab and Lebanese media published reports stating that Ghazaleh had been beaten up and tortured by Syrian security officers and that three Lebanese doctors had headed to Damascus to provide medical treatment.

No official Syrian explanation was ever issued and no further details on the attack were revealed. Ghazaleh’s fate remained unknown, until his death was announced April 24. Many details are still unknown about the events preceding his death. What seems certain though, is that a third name was struck off the list. Will Ghazaleh be the last, or will the Lebanese curse continue?