UN extends Lebanon investigation into Hariri assassination for another year

The UN approved the extension of the Special Tribunal for Lebanon for about a year, to finalize its work. 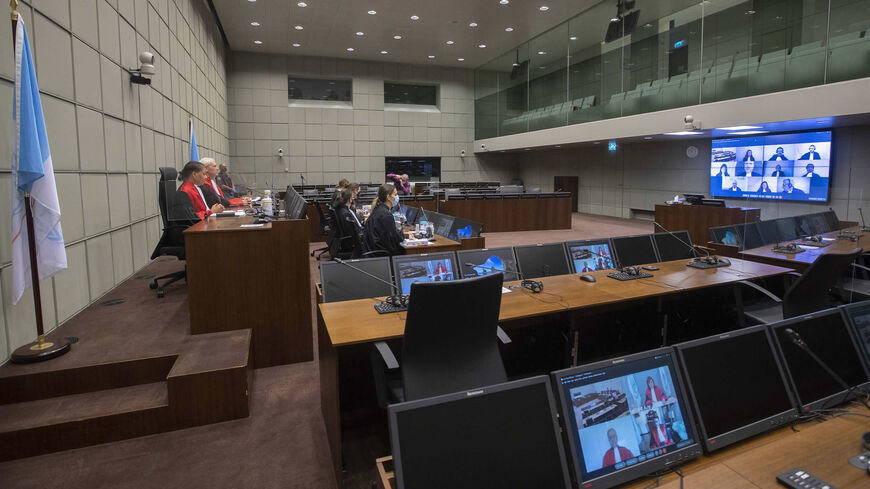 Judges David Re (2nd L) and Janet Nosworthy (L) are seen before the start of the session of the Special Tribunal for Lebanon, where the sentence was set for Salim Jamil Ayyash, a member of the Hezbollah militant group who was convicted of involvement in the assassination of former Lebanese Prime Minister Rafik Hariri and 21 others in 2005, Leidschendam, the Netherlands, Dec. 11, 2020. - Peter Dejong/ANP/AFP via Getty Images

United Nations Secretary-General Antonio Guterres approved on Thursday the extension of the Special Tribunal for Lebanon until Dec. 31.

The tribunal was officially launched in May 2007 under UN auspices in order to investigate the 2005 assassination of Lebanon’s then-Prime Minister Rafik Hariri.

The tribunal has been a heavily contested institution since its creation in 2006. But in an exclusive interview with Al-Monitor, Sir David Baragwanath, then-president of the Special Tribunal for Lebanon, emphasized that it is not a political entity and that the only people the tribunal is interested in are those responsible for the attacks.

“We want all Lebanese people, whatever their politics, to assist what we are doing against a tiny little handful of people, that is the killers,” he said.

Hariri was assassinated on Feb. 14, 2005, by a large explosion that killed 21 people and injured 226 in the heart of downtown Beirut. According to different media reports, the blast resulted from a suicide bomb hidden in a van. It left a crater of about 10 meters (33 feet) wide and 2 meters (6.5 feet) deep at the scene.

Last June, two members of Hezbollah were tried in absentia and sentenced to life imprisonment for their roles in the assassination. They were never captured.

Why it matters: The tribunal was set up when Lebanon was hit by a wave of politically motivated assassinations in 2005. However, today it is more of a legal symbol, unlikely to name the culprits and provide a decisive picture of the plot.

UN spokesman Stephane Dujarric was quoted by The Associated Press as saying that Guterres asked the UN member states to continue funding the Special Tribunal for Lebanon so it can “complete its work and ensure its legacy.”

This would entail "preserving records and archives, responding to requests for information, and ensuring the protection and support of victims and witnesses who cooperated with its work," Dujarric said.

Hariri’s assassination and the local reactions led to a susceptible and tense situation in the country. Public opinion, including political considerations, resulted in the need to establish the tribunal, although not welcomed by all. The magnitude of the assassination and the political implications had to be dealt with by an independent jury.

Hariri’s death resulted in a major uprising that changed Lebanon and pushed out the last of the remaining Syrian military presence in the country. To many, his death remains a mystery; although several have been charged, a definite answer to the murder seems even further today than it was before.

Know More: Lebanon has a history of political assassinations; appealing to foreign powers for help has been a historical given among Lebanese political parties searching to rebalance internal power disparities.

When the tribunal was approved, it raised hopes that for the first time, a country marred by multiple incidents of political violence could find a resolution. The fact that it was safe from local sensitivities gave a sense of false relief.

Although renewed, the prospect of reaching a conclusion is far less likely as many of those suspected are dead or unreachable. Fifteen years into the prosecution with a cost of $970 million and no solid argument of the bombing plot or who ordered it has been unveiled.