Lebanese protesters take their uprising to the doorsteps of political elite

Protesters across Lebanon have begun to move toward a strategy that targets public institutions. 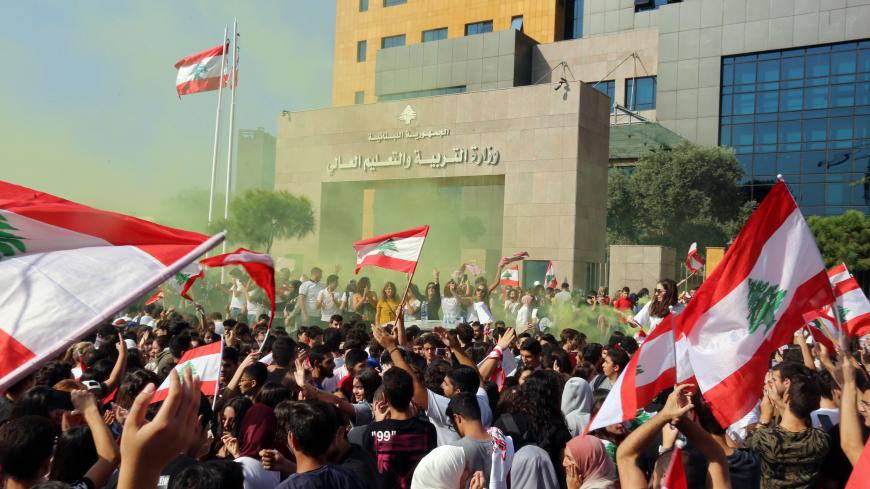 On Nov. 6, hundreds of demonstrators across Lebanon organized protests at locations that until this week had remained largely outside the scope of the Lebanese uprising. From the Ministry of Education to the Palace of Justice to the headquarters of state-owned telecommunications companies, protesters gathered to bring their grievances directly to Lebanon’s decision-making bodies.

“We are targeting the institutions that are the basic corruption sites,” protester Cybele Yazbeck told Al-Monitor at a protest in front of Electricite du Liban, Lebanon’s primary electricity provider. “These institutions are where we can get our demands [fulfilled].”

During three weeks of protests, Lebanon’s ongoing uprising has utilized marches, the occupation of public squares and the blockage of major roads throughout the country to demand the resignation of the government, an end to the sectarian system of government, the recovery of embezzled funds and more.

A week after the Oct. 29 resignation of Prime Minister Saad Hariri, protesters across Lebanon have begun to move away from roadblocks in favor of a new strategy that targets public institutions that the demonstrators see as responsible for Lebanon’s socioeconomic problems in order to put pressure more directly on decision-makers and on the legal system as it prepares to investigate corruption cases. In addition to creating a new front in the fight against the establishment, according to both protest veterans and analysts, this new strategy also represents a symbolic recovery of spaces and public goods that demonstrators claim have been taken from the Lebanese people.

Hundreds of students gathered in front of the Ministry of Education on Nov. 6 to protest, among other things, the reopening of schools, which many protesters said they felt was an effort to steer the country back toward normalcy.

“We came down to the ministry to say that, no, we must not open the schools, and we must not let the country return to how it was before, because we have not achieved our rights,” protester Dima Moukhallalati told Al-Monitor.

Earlier in the day, limited clashes were reported to have erupted between demonstrators and security forces at the ministry as riot police were reported to have dragged students out of the street. Caretaker Education Minister Akram Chehayeb issued a statement Nov. 5 that said he would give individual school administrators the choice of whether to open or remain closed. On Nov. 7, he encouraged students to return to classes.

Protests and walkouts from schools that had opened took place Nov. 6 in Sidon, Tripoli and other cities and continued in Beirut on Nov. 7.

Also, putting pressure on sites of perceived corruption has been a major focus for protests at state institutions. On Nov. 5, demonstrators stormed the waterfront at Zaitunay Bay, an area built and partially owned by Solidere, a development company founded by Hariri’s father, former Prime Minister Rafik Hariri. Solidere was also responsible for rebuilding much of downtown Beirut following Lebanon’s civil war, but has been accused of corruption and of creating projects that are inaccessible to poor and working-class Lebanese. On the evening of Nov. 6, protesters also forced their way inside the Eden Bay resort along Beirut’s seashore, leaving at least one person reportedly injured by police.

“After Hariri resigned it became more crucial for us to target those public and private institutions that those politicians own,” protester Alex Saad told Al-Monitor. “This is where the corruption stems from.”

Saad said he had attended a protest Nov. 5 in front of the headquarters of Touch, one of two state-owned phone service providers in Lebanon. Touch and Alfa, the other provider, charge some of the highest rates for internet access in the Middle East. On Nov. 4, caretaker Telecommunications Minister Mohammed Choucair announced that cellphone recharge cards would be sold in Lebanese pounds instead of dollars as protesters had long demanded. But controversy has surrounded Choucair’s decision to purchase a new building for Touch on an expensive piece of land in Beirut since earlier this year. Choucair could not be reached for comment by Al-Monitor.

In front of Electricite du Liban, another state-managed entity, Yazbeck told Al-Monitor that the new focus of the protests has been necessary to put pressure not only on politicians working to create a new government, but also to remind future ministers to follow through on key protest demands, which include better access to electricity. Energy and Water Minister Nada Boustani’s office refused to comment on the issue.

Yazbeck added that many had chosen to move away from closing roads to avoid negatively impacting regular Lebanese. A protester who spoke on condition of anonymity in Nabatieh, a city in south Lebanon which is widely considered to be a Hezbollah-stronghold, said a similar consensus had been reached there.

“Maybe [closing roads] will become appropriate again with time, but for now we will be satisfied with putting pressure on state institutions,” the protester told Al-Monitor via WhatsApp.

Protesters in Nabatieh were reported to have been able to close the local Central Bank branch, the post office and the local telecommunications branch Nov. 5.

Although road closures had put significant pressure on the state, several demonstrators Al-Monitor spoke with said drivers had yelled insults as the closures continued. On Nov. 6, the Free Patriotic Movement, the single largest party in parliament, launched a lawsuit against demonstrators involved in blocking roads, accusing them of “causing material and moral damage to citizens.”

“Definitely there should be a behavior change from the political class, to adapt to the situation,” Aoun said. “We have to give the right signals to the people starting with a new government that it’s really part of the change they are hoping for.”

Tariq Serhan, an activist who has taken part in protest movements since the 2015 demonstrations over the waste crisis, told Al-Monitor that the new protest methods are meant to push for the implementation of a government that is divorced from the traditional political class.

“These centers [of corruption] have a symbolism for the political system we have,” Serhan told Al-Monitor. “The Central Bank, Alfa and Touch, all of that is related to the daily life of a Lebanese person.”

Serhan had been part of a Nov. 6 march originating at the Palace of Justice that had been meant to pressure the judiciary to hold corrupt politicians accountable. Street pressure is believed to have pushed long-delayed corruption cases to be moved forward, and several officials, including former Prime Minister Fouad Siniora, were ordered on Nov. 6 to appear for questioning over corruption claims.

Mona Fawaz, a professor of urban studies and planning at the American University of Beirut, said demonstrations in places such as courthouses, Zaitunay Bay and dysfunctional state institutions are all part of a process of creating meaning for regular people around places of dispossession and corruption.

“Basically people are denouncing the privatization of these spaces as part of the corruption, reclaiming what is part and parcel of the public good,” she told Al-Monitor. “The anti-corruption call … goes to the areas where people identify there is a ‘stolen public good.’”

Protests in front of power plants, universities, the Palace of Justice and many other state bodies continued to take place Nov. 7, and many more targeted demonstrations will likely take place in the coming days. These new demonstrations, which seem less susceptible to negative attention from authorities than roadblocks, may not only be yielding short-term, concrete results, but are also emerging as an avenue of catharsis for demonstrators who have long been shut out of public spaces and institutions. Whether these methods will translate into more fundamental changes in the long run, however, remains to be seen.