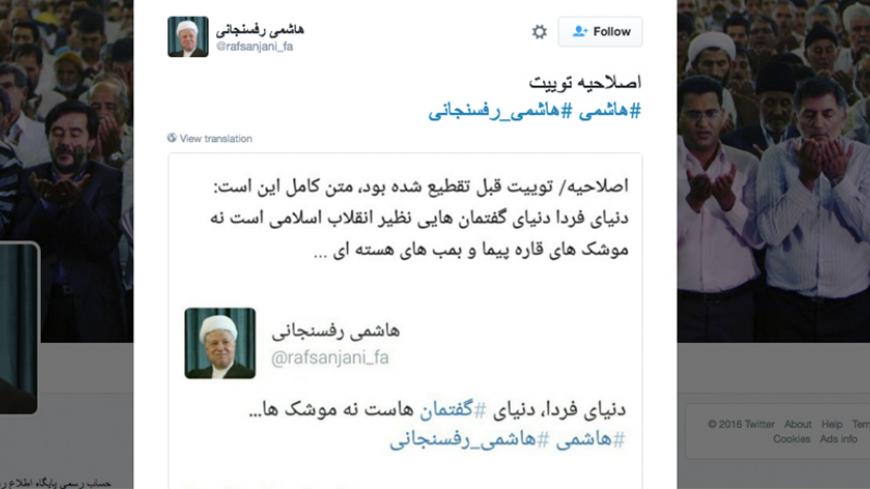 In a March 30 speech, Iran’s supreme leader, Ayatollah Ali Khamenei, criticized those who think “the world of tomorrow is a world of discourse, not missiles,” declaring it “treasonous” if uttered knowingly. Khamenei’s reference was a not-so-veiled response to a March 23 tweet by the media team of Ayatollah Ali Akbar Hashemi Rafsanjani.

Hours after Khamenei’s speech, and a week after the original tweet, the Twitter account issued a correction, claiming that the original tweet had only contained part of Rafsanjani’s comments. According to the revised tweet, Rafsanjani had originally said, “The world of tomorrow is the world of the discourse of the Islamic Revolution, not intercontinental ballistic missiles and atomic weapons.”

Despite the hasty correction by Rafsanjani’s office, Iranian figures opposed to Rafsanjani’s gesture of compromise toward the United States and other Western countries took the opportunity to attack the aging statesmen and draw a hard line on Iranian missiles.

Without identifying Rafsanjani, Javad Karimi-Ghodousi, a member of parliament’s National Security and Foreign Policy Commission, said March 31, “The individual who expressed this and said that the country does not need a missile industry is not simple, just recently arrived on the scene or unaware of the regional or world equations, and is completely aware of the threats against the Islamic Republic by the arrogant powers.”

Karimi-Ghodousi further stated, “This individual adopted this position with awareness, and the intelligence and security services of the country, especially the Islamic Revolutionary Guard Corps, should publish the documents of this treason.”

Conservative analyst Mehdi Mohammadi interpreted Rafsanjani’s comments as being linked to US plans for Iran in the post-nuclear deal era. In a March 31 interview with the Fars News Agency, Mohammadi said that even before the nuclear deal was agreed to by Iran and the six world powers, “It was clear that from the side of the Americans, the deal was the beginning of encouraging Iran to compromise in the area of national security.” According to Mohammadi, Western countries are more concerned about Iranian missiles than the nuclear program, because the nuclear program was never a military threat, whereas Iranian missiles have ruled out an attack from another country.

Most alarming for domestic critics seeking a softer approach internationally and toward the United States was Mohammadi's assertion that to weaken Iran’s defensive capabilities, the United States will rely “on a movement and domestic network that will try to rationalize and theorize about Iran’s national security.”

On his Telegram account, Mohammadi also criticized Western media for suggesting that there is some sort of “deep split” in Iran between Rafsanjani and Khamenei over the missile issue. He said there can only be a split when the two sides have equal influence in the country, plus Rafsanjani’s swift correction to the tweet showed that such a division does not exist.

Defense Minister Hossein Dehghan appeared on Iranian television March 31 to defend the missile program and test launches carried out in early March. “The tests that are conducted in various parts are for the production of arms that are an appropriate response to likely threats,” said Dehghan. He also remarked that Iran would never pursue unconventional weapons, but, he added, “In order to acquire the defensive capability in order to respond to any threats, [Iran] will always take action to defend itself.” Dehghan asserted, “In this field, we do not need the permission or confirmation of others.”

Dehghan also said that the recent missile tests, which were criticized by the United States and European officials, were not in violation of the comprehensive nuclear agreement and will not prompt the UN Security Council to respond. He accused the United States of not wanting Iran to “increase its national strength.”