Remarks by Ayatollah Ali Akbar Hashemi Rafsanjani on the benefits of less military spending have stirred controversy in Iran. 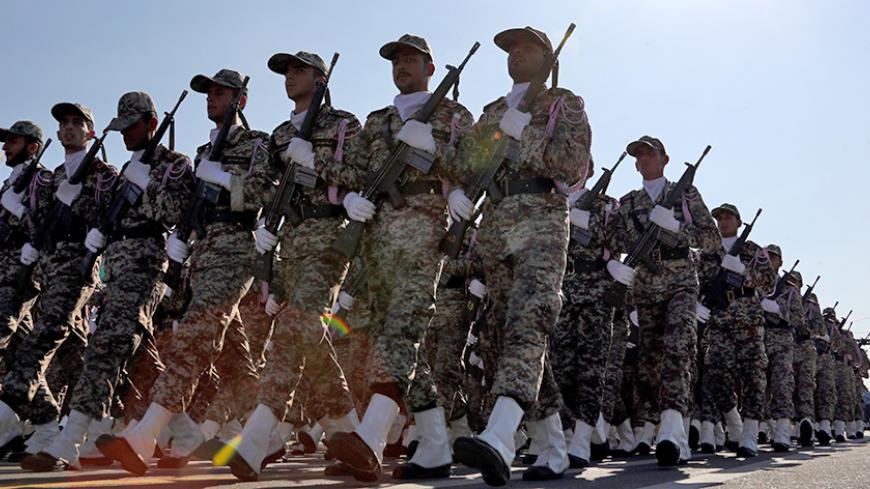 Iranian soldiers march during the annual military parade marking the anniversary of the start of Iran's 1980-1988 war with Iraq, Tehran, Iran, Sept. 22, 2015.

TEHRAN, Iran — The chair of Iran's Expediency Council, Ayatollah Ali Akbar Hashemi Rafsanjani, delivered the following remarks Aug. 10 at the 33rd Summit of Managers and Heads of Education in the Country, organized by the Ministry of Education:

Today, you can see that Germany and Japan have the strongest economies in the world. These same two countries were prohibited from having military forces after the Second World War. When a country is at war, it spends so much money on its military. With no military spending, these countries could use that extra money on science and production and were able to create a science-based economy for themselves. As a result, they are no longer fragile. The door has been opened to a similar process in Iran. Managers, teachers, and concerned citizens should use this opportunity. I am sure that we can get there during President [Hassan] Rouhani’s second term.

In due time, radical and conservative media outlets and figures began to heap harsh criticism on Rafsanjani's remarks. Those not inclined to look upon Rafsanjani favorably seized the opportunity to attack him.

Brig. Gen. Amir Ali Hajizadeh, commander of the Aerospace Force of the Islamic Revolutionary Guard Corps, was among the first to criticize Rafsanjani. On Sept. 8, Hajizadeh said, “If he dares to go without his bodyguards for a few days, then he can claim that the country does not need military forces.” Hajizadeh also remarked that one of Iran’s major problems is the absence of any kind of “political redline,” asserting, “Individuals are willing to say anything or do anything in order to achieve their political objectives.”

Member of parliament and hard-liner Javad Karimi Ghodoosi also reacted harshly, saying on Sept. 10 that Rafsanjani’s remarks were relaying the good news to the United States that the Islamic Republic would be disarming itself. Ghodoosi does not believe that the comments originated with Rafsanjani, but were some sort of complex code conceived by think tanks in France, Britain and the Netherlands.

Hossein Shariatmadari, editor of the hard-line daily Kayhan, a position appointed by the supreme leader, published an editorial on Sept. 3 titled “Mr. Rafsanjani, Don’t Send an Invitation Card to Daesh.” In it, he wrote, “Would Daesh [Islamic State], which is dreaming of entering Iran and committing atrocities similar to those it has committed in Iraq and Syria, hesitate for even one minute if given a chance to commit these atrocities? If the answer is ‘no,’ and considering that in case of disarmament Iran will become an easy target for enemies big and small, can we then doubt that Mr. Hashemi’s comments are basically inviting Daesh terrorists into Iran?”

Rafsanjani's office felt compelled to respond, issuing an explanation on Sept. 5 to media outlets regarding his remarks. The statement did not deny that Rafsanjani had made the comments, but rather focused on Rafsanjani’s revolutionary background while providing general explanations about what he had said:

Accusing someone who was the spokesman of the Supreme Defense Council during the Imposed [Iran-Iraq] War, who was appointed by the late Imam [Ruhollah] Khomeini as commander in chief of Iran's armed forces, who later, as president, played the most important role in strengthening the country’s defense system, of wanting to weaken the country’s armed forces, indicates that a coherent scheme is at work. This possibility becomes more likely when a series of insults and accusations suddenly appears in media outlets, big and small, that are connected to a particular circle.

After Khamenei's not-so-subtle response, Rafsanjani’s office first tried to deny any connection between the Twitter account and Rafsanjani personally. After a few days, however, a revised tweet was posted, explaining that Rafsanjani had been only partially quoted, suggesting that his words had been taken out of context.

Beyond these separate controversies, and beyond Rafsanjani’s resorting to either denial, revision or justification of his comments in the face of harsh criticism from his conservative opponents, a big picture is emerging. The question is, “How much traction will Rafsanjani’s increasingly clear vision of the Iranian military, and its role in the country, ultimately gain?” Only time will tell.