Are Iranian missiles a shield against better relations with US?

After Ayatollah Ali Akbar Hashemi Rafsanjani said that discourse and not missiles is the way of the future, Supreme Leader Ayatollah Ali Khamenei called such talk treasonous. 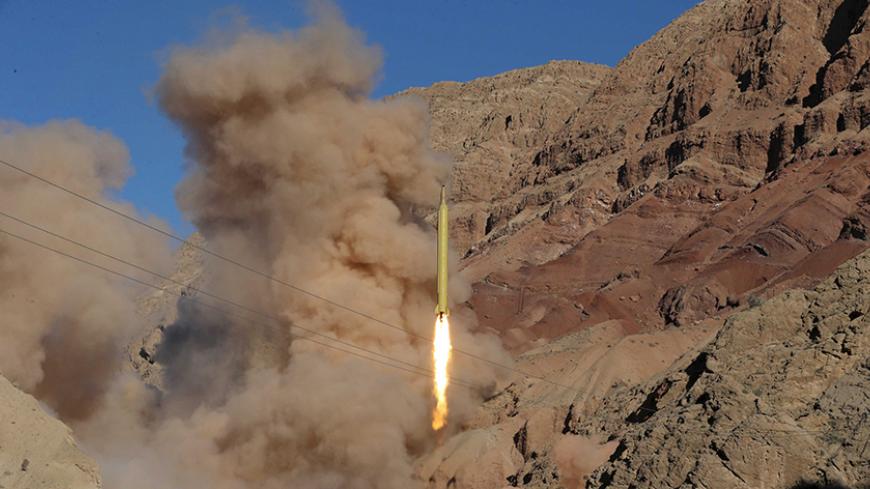 The nuclear agreement between Iran and the six world powers ended a decade of tensions and saw for the first time in over three decades direct, bilateral negotiations between Iran and the United States. But Iran’s Supreme Leader Ayatollah Ali Khamenei has not put his guard down against what he sees as American designs on Iran. Domestically, Iranian officials who want better relations with the United States are often labeled as being under the influence or agents of US “penetration.” Regionally and internationally, it appears that Iranian missiles are perhaps intended to make sure the United States keeps a safe distance from the country. However, not all officials are in line with that worldview.

“The world of tomorrow is the world of discourse, not missiles,” read a March 23 tweet by Ayatollah Ali Akbar Hashemi Rafsanjani, who has favored better relations with the United States in previous statements. On March 9, the Islamic Revolutionary Guard Corps (IRGC) had tested long-range ballistic missiles, which European and US officials said were “in defiance” of a UN resolution. The missile launch was highly publicized, and afterward, a number of IRGC commanders touted Iran’s defensive and military capabilities in interviews with Iranian media.

Rafsanjani’s tweet, which was shared widely online and covered by Iranian media, seems to have caught the attention of Khamenei, who indirectly addressed it in a March 30 speech.

“In this jungle-like world, if the Islamic Republic had merely pursued negotiations and economic exchanges but not have defensive capabilities, would not even small countries give themselves permission to threaten Iran?” asked Khamenei rhetorically. He said that enemy countries would use any means, including dialogue, economic exchanges, sanctions and military threats, in order to pursue its goals in Iran, and that Iran must be ready to confront and defend against all of these tools.

In contrast to Rafsanjani, who sees the world of tomorrow as the world of negotiations and not missiles, Khamenei said, “These days are the days of everything; otherwise, they will easily take Iran’s rights.” In perhaps his harshest attack on Rafsanjani, he said, “If this was said out of unawareness, it is one issue, but if it was said from awareness, it is treasonous.”

The last time Khamenei and Rafsanjani so publicly diverged on a major issue was the 2009 post-election protests. As a result of that clash, Rafsanjani lost the election for the chairmanship of the Assembly of Experts and has not been given the platform of Tehran Friday prayer leader since. While the missile issue does not present a crisis on the same level as 2009, given statements by IRGC commanders, it is certainly going to be a central focus within Iran.

In a March 28 interview with Iranian television, Amir Ali Hajizadeh, commander of the IRGC Aerospace Force, suggested that Iran would continue to advertise more missile tests. “Considering that we have not made our exercises public in the last two years, maybe it has made the Americans a little bold,” said Hajizadeh.

Demonstrating Khamenei’s insistence on domestic missile capability, Hajizadeh recounted that some of the states that had separated from the Soviet Union after its collapse offered Iran missiles at one-fourth the price that North Korea was offering them. He said that while everyone was in favor of purchasing these missiles, Khamenei was the only person to reject the proposal, saying that if they buy them, it would essentially end Iran’s motivations to make them domestically.

On the US sanctions against those involved in Iranian missile production, Hajizadeh said they are intended to make Iranian officials fearful and have no impact. “The biggest threat against us is this fear,” he added, urging Iranian officials not to worry. He also said that the IRGC is ready in case there is an attack and its only concern is domestically and the princelings [children of high-ranking officials] who have influence on officials. He stressed that “they should not be fearful; they should stand strong.”