Israeli Agriculture Minister Uri Ariel had to retract his scheme to expel street cats to another country and accept the state veterinary plan of sterilizing them. 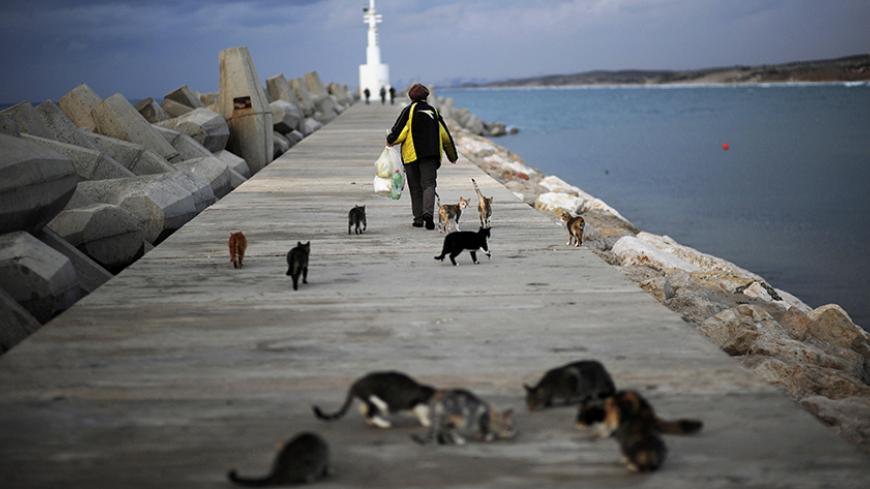 A woman walks at the marina after feeding cats in the southern city of Ashkelon, Dec. 7, 2009. - REUTERS/Amir Cohen

This was one of the strangest episodes to emerge from the Israeli government, and in a country where reality sometimes exceeds all imagination, it’s no easy competition. Israeli Minister of Agriculture Uri Ariel (HaBayit HaYehudi) decided last November not to pass the budget for spaying and neutering stray cats — a policy experts agree is effective in diminishing their reproduction. Ariel thought that the process violates the Jewish belief that forbids causing pain to animals. Cats in Israel surely breathed a sigh of relief at the minister’s unwillingness to snip their private parts, but the nation of cats certainly wasn’t prepared for the alternatives he proposed. In a letter he sent to Avi Gabbay, the minister of environmental protection, Ariel proposed using the funds for one of two alternatives: research on alternatives to the invasive procedure or — and this is the strange part of the whole story — using “the budget to deport stray dogs and/or cats of one sex (all the males or all the females) to a foreign country that agrees to accept them.” The Israeli public didn’t know whether to laugh or cry and immediately dubbed the episode “the Cat Transfer Plan.”

Online, Israelis couldn’t resist laughing, and for good reason. Raz Tsipris uploaded a meme to Facebook that used the memory of the disengagement from the Gaza Strip, which Ariel prominently and vocally opposed, stating “a Jew does not expel a Jewish cat,” which echoes the slogan of opponents of the 2005 Gaza disengagement, “A Jew does not expel a Jew.” Others took the issue a bit more seriously and established a protest group on Facebook against “stopping spaying and neutering in the name of Halakhah [Jewish law].” In short, the episode became an amusing/pathetic testimony to the absurd outcomes that the dissonance between religion and healthy reason could lead to. Activists at the nongovernmental organization (NGO) Let the Animals Live wonder today, if Ariel is so concerned with issues of animal rights in Jewish law, why other laws that touch on this issue are being delayed, like inhumane shipping of animals or raising chickens in cages. “There’s a sense that there’s strong adherence to only certain instructions in Jewish law,” attorney Yosi Wolfson of Let the Animals Live said cautiously. On March 15, animal rights day, however, the Ministry of Agriculture published data that shows, according to the ministry, uncompromising action in this field, like advancing relevant legislation such as advocating an amendment to the Animal Welfare bill.

Ariel quickly realized how ridiculous his proposal was, and chose the other option, of dedicating the budget to research, perhaps following the reactions of media across the world, which wondered how the cat transfer would work, by “chartered flights, little parachutes?” But this attempt by the minister was also quickly thwarted. Let the Animals Live sued the minister over the decision at the High Court, which put the ball in the hands of the attorney general, who himself obligated Ariel to dedicate the budget to spaying and neutering as the law requires.

While the episode was a blow to Ariel, his move still did some damage. On Dec. 31, 2015, the Ministry of Agriculture released a press release that announced “a program to fund spaying and neutering stray cats for 2015.” Perhaps this is amusing, but not to Wolfson, who said, “We lost a year of spaying and neutering in an area where continuity is critical.” The Ministry of Agriculture also takes pride in the advancement of an ordinance that would obligate municipalities and organizations that operate animal shelters to place only neutered and spayed animals for adoption, but Wolfson claims that they are delaying this ordinance, “which turns the shelters into part of the problem — the offspring of the animals they’re placing for adoption will come back to them as abandoned animals.”

Despite that, there is still hope. The announcement from the Ministry of Agriculture attests that it recognizes the method as the most efficient means to control reproduction of the stray cat population in Israel. Their plan, on paper, seems serious: They declare that only spaying or neutering of 75% of the cat population would be efficient, and thus they focused on localities where this percentage could be reached. The plan is budgeted at 4.5 million shekels ($1.17 million) a year, and local authorities are supposed to dedicate a similar sum.

The Ministry of Agriculture also declared that it would give “preference in support for municipalities that take additional steps, from other sources, which would help the goal of spaying and neutering in caring for the welfare of street cats, including: setting up organized feeding stations and setting up buried or sealed garbage bins that street cats wouldn’t be able to access … and tracking and monitoring the cats.” The Ministry of Agriculture explained that without such activities, the process wouldn’t achieve the desired results.

The program will be put to the test in 2017, which is rapidly approaching, when the next budget will be passed. If the budget will be passed without any problems, and there will be continuity in the program, the situation could improve. But if it turns out that Ariel intends to repeat the delay that he caused for another year, the situation could return to square one — to the joy of Israel’s street cats and the disappointment of animal rights advocates.

The Ministry of Agriculture responded, “We continue to support spaying and neutering programs in order to prevent the reproduction of stray cats.” No response was received from Ariel’s office at the time of publication.