The intifada of attrition

Unlike the first two intifadas, the current uprising appears unlikely to lead to political breakthroughs or the rise of a new Palestinian leadership. 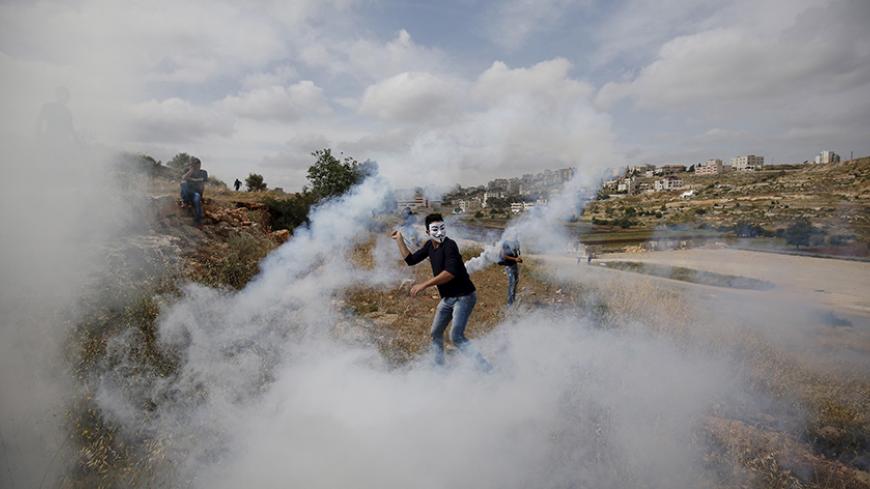 A Palestinian protester returns a tear gas canister fired by Israeli troops during clashes near Israel's Ofer Prison near the West Bank city of Ramallah, May 22, 2015. - REUTERS/Mohamad Torokman

The current intifada will not yield substantial change for the Palestinians or bring about a diplomatic breakthrough. This is the belief of Fatah activists who served as field leaders in the first and second intifadas.

The first intifada (1987-1993) ended with the Oslo Accord, which on paper promised the creation of a Palestinian state within an established time frame. The second intifada (2000-2005), after terrible bloodshed, led to Israel’s withdrawal from the Gaza Strip and the rise of Hamas. If this is so, why don’t Fatah field leaders think the current intifada, being carried out by individuals, will bring about positive change, in the best-case scenario, or lead to tremendous chaos, in the worst-case scenario? In these activists' opinion, which is shared by Palestinian journalists who covered the germination of past intifadas and their results, today's intifada is doomed to fail because no leader has emerged to lead the would-be insurrectionists.

In the first intifada, which broke out in December 1987 as a popular uprising in Gaza's Jabaliya refugee camp, Fatah field operatives immediately took charge, acting on their own, and created a central command structure. That’s where the process of mobility for a new Palestinian leadership began. Ihab al-Ashkar, for instance, was a key activist in the central command, orchestrating collective actions, such as protests, confrontations with the Israeli military and general strikes, and handling contact with the Palestinian leadership in Tunisia.

Other young Palestinians consolidated their power through the waves of the uprising and had their status as leaders strengthened after they were arrested by Israel and sent to prison. For instance, Hisham Abd al-Razzaq, Mousa Abed al-Nabi, Sufian Abu Zaida and Qadura Fares, as well as senior field leaders Mohammed Dahlan and Jibril Rajoub, who were expelled from the territories, became leaders in exile, returning after the signing of the Oslo Accord. Most of the former field operatives are convinced today that if Israel had not reached an agreement with Palestine Liberation Organization Chairman Yasser Arafat, it would have had to reach an agreement with them, as the leaders on the ground in the territories.

Marwan Barghouti, a leader of the Tanzim, Fatah's militia, is a notable example of an operative who started out as a middle manager among activists and became a prominent leader in the second intifada. Although Barghouti is serving five life sentences after being convicted in Israel of involvement in terror attacks, his name is mentioned as someone who could one day succeed Palestinian President Mahmoud Abbas, although such a scenario seems unlikely unless Israel agrees to release him from prison.

In recent months, Palestinians and Israelis have been seized by the third intifada, which is quite different from the previous rebellions. There is no doubt that this individual intifada is more authentic than its two predecessors, as it is unfolding without the guidance of field activists, instead riding a wave of despair among the Palestinian population. In effect, the number of young people who decide one morning to carry out a stabbing, shooting or vehicular attack in Israel is no fewer at this point than if they had had guidance from field operatives.

The local leaders of the previous intifadas believe that this absence of guidance is the main weakness of the current intifada. In their view, without leadership, there’s no direction, no responsibility and no aim. The individual intifada has not sprouted a new leadership, although the despairing youths who have carried out attacks have also condemned and challenged the current Palestinian leadership, that is, the Palestinian Authority (PA), Fatah and Hamas.

No central command structure has arisen to direct the third intifada. The name of not even one activist has come to the fore, someone to define the goals of the intifada for the young insurrectionists. Since September, after dozens of attacks, a grim picture is becoming increasingly clear: Despair, economic distress and personal distress are driving young Palestinians to carry out attacks against Israelis. Most of them act using basic means, like knives.

Veteran Fatah field operatives do not think the current intifada will strike fear in Israelis or bring meaningful pressure to bear on the Israeli leadership to compromise and reach some kind of diplomatic agreement, as the two previous intifadas did. To this, one can add international apathy toward the situation in the territories.

In the past, the US administration pressed Israel and the Palestinians to reach an agreement to prevent an escalation of hostilities and more bloodshed, but this time, such involvement is not a factor able to alter the situation. In addition, international public opinion has not paid particular attention to the intifada or the situation in the territories, leaving the impression that the Israeli-Palestinian conflict has exhausted everyone. It appears that not one world leader is interested in getting near this sick bed, where there is no chance, based on past experience, to save the patient.

The obvious conclusion is that what is underway is an intifada of attrition. It could continue for a long time and lead to chaos in the PA, including, as has been examined in Al-Monitor, the end of Abbas' rule. The Palestinian president is between a rock and a hard place — between youths rising up against Israel and his desire to prevent a loss of control that could bring about the collapse of the PA and his government. Abbas also knows, however, as do other senior PA leaders, that in the foreseeable future, there will be no diplomatic movement, which itself puts his position in danger.

A Palestinian journalist told Al-Monitor that he had found through investigation that most of the youths who carried out attacks against Israelis had dreamed of working in Israel to break the cycle of economic distress and make an honorable living. It is a paradox that perhaps most precisely expresses the character of the third intifada: work or attack. Despair or hope. In the meantime, despair rules. Hope is not visible on the horizon.