If the current trajectory of arms deliveries continues, it appears that countries such as Iran, Russia and China are set to become the Middle East’s main weapons suppliers. 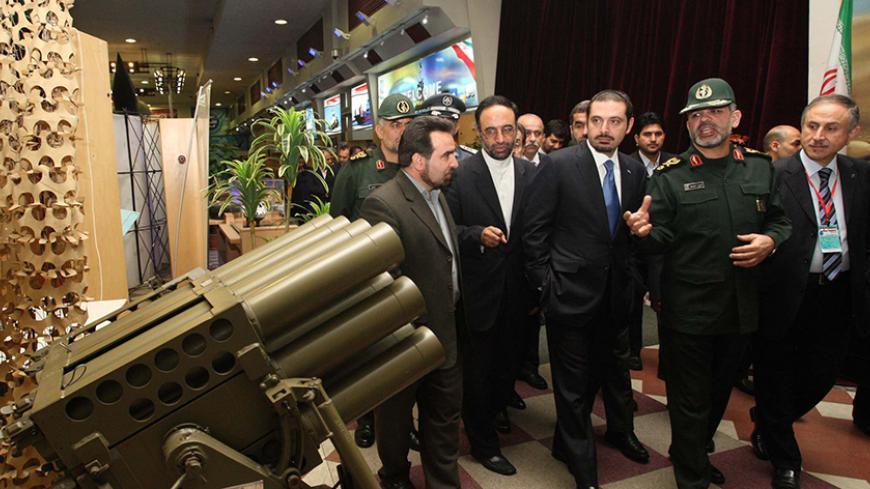 TEHRAN, Iran — The Iraqi capital, Baghdad, has been host to a special military and defense industry exhibition since March 5. Among the various countries displaying their goods, China has been particularly active. However, the perhaps most noteworthy feature of the exhibition is the strong — and official — presence of Iran’s Ministry of Defense, and the fact that a vast array of Iranian-made armaments and military equipment is being showcased. According to Iran's official IRNA news agency, after China, the Iranian Ministry of Defense and the Defense Industries Organization of Iran have had the strongest presence at the exhibition when it comes to equipment variety.

The Joint Comprehensive Plan of Action (JCPOA) stipulates that Iran will until October 2020 be barred from conventional weapons trade, without first obtaining authorization from the United Nations Security Council. Nonetheless, during the past few years, in spite of extensive sanctions on exports of conventional military equipment, Iran has managed to become self-sufficient in the production of a vast range of weapons and military equipment. Indeed, a large portion of Iran’s military equipment is presently met by domestic production. Given this capacity, Iran appears now ready to establish a serious and effective presence in the international armament market.

In past years, both the Iraqi and Syrian governments — among the most important political and security allies of the Islamic Republic in the region — have been dealing with civil war and terrorism. As political differences emerged between the governments in Damascus and Baghdad on the one hand, and with Western countries on the other, the provision of Western military equipment to these countries was disrupted. Enter Iran, which — after the Islamic State's capture of Mosul in the summer of 2014 — was the first country that sent arms to Iraqi security forces and the Kurdish peshmerga. Moreover, deliveries of weapons to Iraq have increased so much that all semi-heavy artillery equipment, sniper weapons and many other types of personal and armored weapons presently used by Iraqi paramilitary forces are Iranian-made. In addition, over the past year, Iran has also started sending the T-72S main battle tank to Iraq.

The same trajectory is evident in regard to Syria. In comparison with Iraq, Syria has always had a more advanced and better-equipped army while Russian military cooperation has been continuous. However, as Iraqi and Afghan paramilitary forces entered Syria, and Damascus faced the danger of its arsenals being depleted, Iranian military equipment has emerged in Syria. For instance, during the ongoing battle for Aleppo, the extensive presence of Iranian-made goods has been widely recorded. This equipment includes Safir tactical military vehicles, Shaheen sniper weapons and other types of personal weapons.

It is thus evident that Iranian-made military equipment is officially and extensively now in use in Lebanon, Iraq and Syria. Since Iranian-made arms and equipment have yet to be tested, it is not possible to compare them with the originals they’re modeled after. However, the expansion of terrorism in the region has given Iran an opportunity to test its military equipment in action and learn about possible defects.

Iran’s focus on its domestic arms industry has been ongoing. Upon taking office in 2013, Iranian President Hassan Rouhani published the general principles of the government and officially announced, in section 7.2.18, that “considering the international sanctions and the widespread threats against the country, it is necessary for the Administration to follow up on the self-sufficiency programs of the defense industry. Also, the Administration will put on its agenda the commercialization of military industries and will utilize the existing potentials of the country’s defense industry in order to increase the country's foreign currency revenues.”

The JCPOA, and the prospect of the lifting of conventional arms-related sanctions in the next five years, have resulted in the Iranian armed forces seeking a way to expand their domestic military industrial capabilities and become part of the international arms market. For instance, Iran’s minister of defense participates in most military exhibitions in the region. He is also constantly in contact with countries such as China and Russia regarding the transfer of the most advanced military equipment technology to Iran. In this vein, it appears that the sanctions related to conventional weapons trade are already being dropped, and that in the near future Iran will become a serious rival of both Western and Eastern arms firms that are presently providing conventional weapons to regional states.

At the Baghdad exhibition, Iran has showcased a wide range of military equipment such as twinned combat boats, powerful sea engines, unmanned aerial vehicles, various mortars, different rockets and artillery systems, defense items such as advanced systems capable of identifying chemical and radioactive elements, as well as systems capable of designing and producing helicopter and reconnaissance aircraft. Considering Iran’s active participation in the Baghdad military exhibition, it can be concluded that Iran wants to enter the lucrative global arms market.

Given the nature of political relations between Iran and the West, what can be described as a mutual arms embargo — beyond the existing legal restrictions— appears to be in place. Meanwhile, during the past two years, the Iranians have generously delivered weapons to their regional partners so much that Lebanon’s defense minister has announced that his country is ready to receive a large amount of weapons from Iran to address the needs of its military. Thus, if the current trajectory of arms deliveries continues, it appears that countries such as Iran, Russia and China are set to become the Middle East’s main weapons suppliers.