Tehran plans to purchase T-90 tanks from Russia, but is it enough to strengthen the Iranian military? 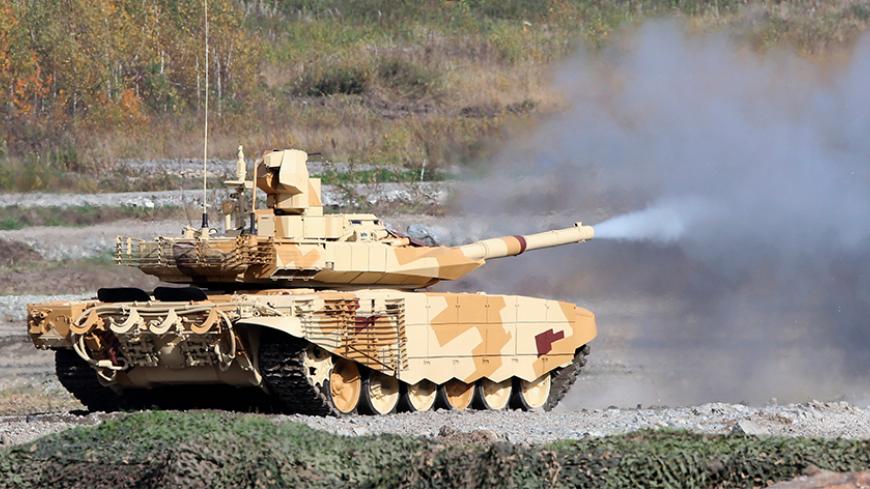 TEHRAN, Iran – On Dec. 8, the commander of the Iranian army's ground forces, Brig. Gen. Ahmad Reza Pourdastan, announced that the Islamic Republic’s “ties with Russia in the field of equipment supply are established. Our first contract was for the S-300 missile system and now we have on our agenda the purchase of T-90 tanks. God willing, our experts will go on a trip to Russia to sign the related contracts with the Russians. However, no such contract has been signed yet.”

Following the signing of the Joint Comprehensive Plan of Action (JCPOA) in Vienna earlier this year, Iran’s military became hopeful that its might would increase. This was mainly because the P5+1 group of countries (Russia, China, France, Britain and the United States plus Germany) had pledged under the JCPOA to lift the UN heavy arms embargo against Iran within the next five years, in return for Tehran showing goodwill and abiding by its commitments.

The first branch of Iran’s military to pursue the idea of expansion through the purchase of heavy equipment was the air force, which has already held negotiations with the Russians and the Chinese.

Indeed, the widespread attrition and deterioration of air force equipment has prompted the Iranian public to view the air force as antiquated. However, in reality, the country’s ground forces are suffering from more complex and deeper problems in terms of hardware.

Prior to the 1979 Islamic Revolution, Iranian armor was considered to possess a higher operational capacity compared to those of the country’s regional rivals. Following the Islamic Revolution and the ensuing 1980-1988 war with Iraq, a great portion of this armor was lost. The international restrictions placed on Iran after the eight-year war with Iraq worsened the situation, making it difficult for the country to quickly upgrade its military technology to an acceptable level.

In recent years, Iran has made numerous attempts to become self-sufficient in the production of armored equipment — none of which have been very successful. This is while countries such as Turkey, Israel, Egypt and Pakistan have succeeded in designing and producing a large part of their modern armored capabilities.

Over the years, Iran has adopted several approaches in order to expand its armored capabilities.

The first approach was to purchase weapons. During and after its war with Iraq, Iran tried to supply some of its armor needs from abroad. Turning to China and Russia, it bought a number of T-59 and T-72Z tanks, respectively. However, the T-59 is in no way suitable for today’s battlefields, while its Iranian upgrade, the T-72Z, is very similar to the T-72 seen in the army of former Iraqi dictator Saddam Hussein. Upon careful consideration of these models’ specifications, it is apparent that the weakest and most inefficient versions of this tank are those produced in Russia.

The second approach was to assemble existing tanks. After making the purchases mentioned above, Iran sought to assemble T-55 and T-72 tanks on its own. The quality of these tanks is not clear, nor are there any reports available on their performance in the battlefield during the war with Iraq. However, what is crystal clear is that these tanks are inferior compared to those found in Israel, Turkey and the Arab armies.

The third approach was to upgrade older tanks. Iran has many old tanks in its arsenal, including the M-48, the M-60, the Scorpion and the Chieftain. Over the years, it has tried to upgrade a number of these vehicles and reintroduce them into its service under new names. Some of these tanks are from the post-World War II era, while the newest ones are from the 1970s. In fact, many are reminiscent of the arsenals employed during the Arab-Israeli wars, the Vietnam War or the Korean War. Other armies, such as those of Turkey, Egypt, Saudi Arabia and Israel, have also attempted to upgrade tanks such as the M-60. However, the upgrades Iran made to these tanks are nowhere close to as significant as the upgrades carried out by the Islamic Republic’s regional rivals.

The fourth approach was to produce domestically made tanks. Iran has heavily invested in the production of Zulfiqar tanks. Local arms factories have been engaged in this project for more than two decades. Yet it was only last year that Iranian state television aired footage of the tank firing a shell. The Zulfiqar is the result of a combination of somewhat old Russian, Chinese and Brazilian technology. Its specifications and efficiency are not clear. Moreover, Iran has not been able to achieve the level of mass production necessary to replace existing models.

Having experienced these disappointments, Iran’s armed forces is now seriously seeking to purchase tanks suitable for today’s battlefields. In this vein, there are three reasons in particular behind why it has decided to buy T-90 tanks. First, they are cheaper compared to today’s more modern tanks. Second, they have greater capabilities compared to the tanks that are already present in the Iranian military. Third, Western countries are reluctant to sell more advanced models to Iran.

Compared to the existing tanks in Iran’s arsenal, the T-90 is more advanced in terms of its penetration capacity, fire power, navigation technology, fire control and guidance system, maneuverability, and sophisticated electronics. However, keep in mind that any type of weaponry is bought or produced with the intention of being prepared for a time of war. Today, the armies of Iran’s regional rivals are in possession of much more advanced and efficient tanks. Israel, for instance, has the Merkava IV, Turkey has the Leopard and Altay, the United Arab Emirates has Leclerc and Saudi Arabia has the Abrams and will have Leopard 2A7 in the near future. Moreover, Egypt also has Abrams, while Jordan and Oman have the Challenger 2. In terms of technical specifications, such as armor penetration, firing precision, engine technology, armor technology, protection level, heating systems, infrared and navigation, these tanks are all significantly more advanced than the T-90. Furthermore, in terms of anti-tank weapons, there are the TOW, Javelin, MILAN and other Western-made anti-armor weapon systems that can easily target T-90 tanks. In fact, the T-90 is an upgraded version of the T-72 — and has thus inherited all of its weak, and strong, points. T-72 tanks were easily blown to pieces during the first 1990-91 Persian Gulf War, in the face of Abrams tanks operated by the US military.

The weak state of Iran’s heavy armor justifies the need to add more modernized tanks. Indeed, this is the first impression upon hearing news of Iran’s planned arms purchases. However, these purchases will be intensively questioned in face of the increasing daily power and advancement of other regional armies and the possible scenarios of conflict. Iran is likely to allocate $3-$5 billion to the purchase of tanks. In a hypothetical conflict situation, these tanks could have to face off against 800 Saudi Leopards along with thousands of Abrams, Challengers, Leclercs and Merkava tanks from Israel and Arab countries. If this occurs, the outcome can easily be predicted.

Hence, some figures inside Iran are looking at the arms purchases of regional countries and comparing the technical specifications of those countries’ current and future artillery with the options available to Iran. Given the current situation, these individuals believe that purchases of T-90 tanks will only result in the destruction of the country’s national wealth — as evidenced in the case of Saddam and his huge army.