The IRGC's plan to win hearts and minds

Pro-regime culture portrays Qasem Soleimani as a brave, strong and mysterious commander as a key component in the campaign to recuperate trust in the IRGC among Iranians and to portray it as a formidable force in the region. 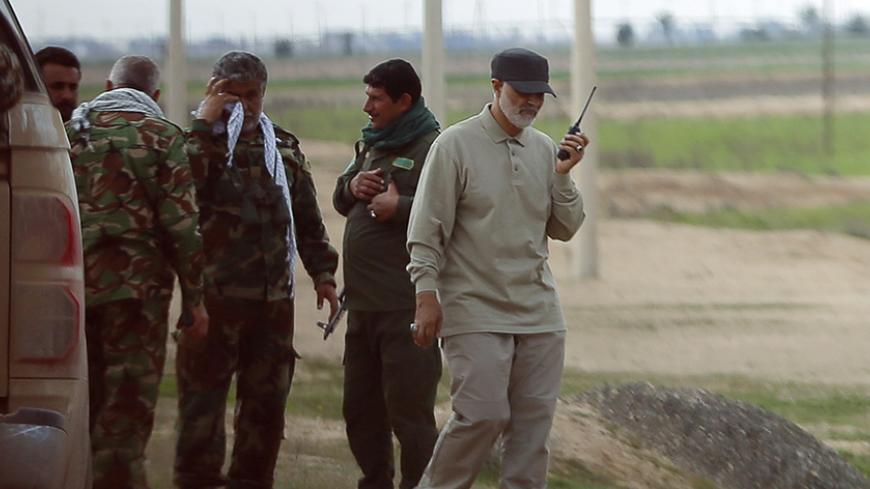 He is referred to as a “shadow” commander by Western journalists as he stealthily fights the Islamic State (IS) in places such as Syria and Iraq on behalf of Iran. He has kept a low profile, despite his position as the commander of the Islamic Revolutionary Guards Corps’ (IRGC) elite foreign operations branch, the Quds Force. Yet last year it seemed that he sprang onto the scene out of the blue. News outlets and social media featured his familiar face posing for selfies on the front lines in Iraq and Syria, documentaries touted his military acumen and music videos passionately praised his strength and bravery. Qasem Soleimani, these new depictions of him communicated, was a force to be celebrated, feared and respected. What accounts for this recent media love fest of a commander with nearly 40 years of service in the IRGC?

The surge in public displays of adoration for Soleimani are part of a larger public relations campaign by the IRGC that dates to the aftermath of the 2009 Green Movement. “We faced a crisis of legitimacy after the suppression of the 2009 uprisings,” a retired IRGC captain who now works in pro-regime media production told Al-Monitor. “People, especially young people, began to turn away from us. We knew we had to win them back. We had to give them heroes they could respect.” Soleimani, or Hajj Qasem as he is affectionately known in Iran, became one of those heroes whom pro-regime media producers wanted to portray, along with the martyred Mostafa Chamran and Imam Musa Sadr. The latter two, killed in 1981 and 1978, respectively, now have numerous films and documentaries that pro-regime cultural centers have backed and created. Yet, the media producers knew they had to offer a hero who is still alive for young people to admire.

Since 2011, pro-regime cultural centers, backed by funding from the IRGC and affiliated Basij paramilitary organization, have stepped up their efforts to put out more media that shows the Guards in a positive light. A member of the Revolutionary Guard who runs a media production studio in Tehran who went by the pseudonym Ali Hasani told Al-Monitor, “No matter what side you were on during the Green Movement, it became clear after the civil war broke out in Syria that our security forces were right in making sure nothing else came from the 2009 movement. We could have turned into Syria, and we need to make sure our young people know not to go down that path.” Like the other interviewees, Hasani spoke on condition that his name be changed.

“I understand the need for change in this country,” Mehdi, a 30-year old member of the Basij who believes in reform, said. “But I don’t want our generation going into the arms of just any opposition movement. We can’t let Iran turn into Syria, and the only ones who are protecting us are the Revolutionary Guards.” The rapid advancement of IS, a sworn enemy of Iran and Shiite Muslims, in the Middle East throughout 2014 and 2015 raised great alarm in Iran. Last year’s announcements in Iran that the country’s intelligence services uncovered plots to detonate bombs in Tehran created an atmosphere of frenzy. As a means to counter this, pro-regime cultural producers were busy creating social media campaigns, television pieces, films and nationalist posters about the IRGC, and Soleimani featured prominently in them.

“What Hajj Qasem has been able to do is no joke. If it weren’t for him, IS would have advanced throughout Iraq and be at our doorsteps. All Iranians owe him. We owe our safety to him, and I think our people are beginning to see that,” Reza, a 27-year old Basij filmmaker, told Al-Monitor. Reza was part of one of the teams running the social media campaigns on Soleimani. The commander is branded today as a defender of the nation and as the key mastermind behind the fight against IS on the ground. Due to this messaging, Soleimani as a figure is now adored not only by those who are in favor of the ruling Islamic Republic, but, crucially, by those who view themselves as Green Movement activists and those who oppose the Islamic Republic as a whole.

“Look at how chaotic the entire region we live in is,” Sepideh, a 26-year old painter who considers herself in opposition to the government, told Al-Monitor. “Iran is the only stable, safe country in our neighborhood, and we have Qasem Soleimani and the Revolutionary Guards to thank for that.” The fight against IS has allowed pro-regime cultural producers to rebrand the IRGC not as defenders of the Islamic Republic, but as defenders of the Iranian nation. In June 2015, during a state memorial service for 175 Iranian divers killed in Iraq during the bloody 1980-88 Iran-Iraq War, for the first time large numbers of young men and women who do not usually attend pro-regime rallies joined the event. “I’m here because I want to pay my respects to all those who have defended our nation,” Rosa, a 22-year old engineering student at the University of Tehran who describes herself as anti-Islamic Republic, told Al-Monitor. “It’s not about the regime anymore,” her boyfriend, Daryoush, chimed in, “it’s about the defense of Iran. Without these men who fought in that war, without leaders like Hajj Qasem who are protecting Iran today, we’d be just like the other countries in our region.” The organizers of that memorial count that day as one of their most successful in reaching out to the “non-supporters of the regime,” as Hossein, one of the organizers, put it to Al-Monitor. “We were able to bring them out because we’ve been successful in changing their minds about the Revolutionary Guards.”

“Would our young men rise up and defend the country in the event of an attack? After 2009, we were afraid the answer was ‘no.’ There was too much distrust and hate against us for putting down that movement,” Abbas, a Revolutionary Guard commander from the southwestern border town of Abadan, told Al-Monitor. “We needed to bring back this trust between us and the people, even the people who want reform in the system. It was crucial.”

The IRGC’s media offensive, including the promotion of Soleimani as the hero par excellence, is thus primarily directed domestically, with the aim of cleaning up an image battered by the 2009 crackdown. Most of all, the perhaps unexpected dynamics of this charm offensive, such as the rise of a new form of nationalism that is pragmatic in the sense that even opponents of the Islamic Republic back some aspects of the Guards’ operations, should not be underestimated.