Is the PA denying Gazans passports?

Palestinians in Gaza are wary of a potential closure of the Bar Association, acting in its capacity as Foreign Ministry, in light of its recent controversy with the State Audit & Administrative Control Bureau. 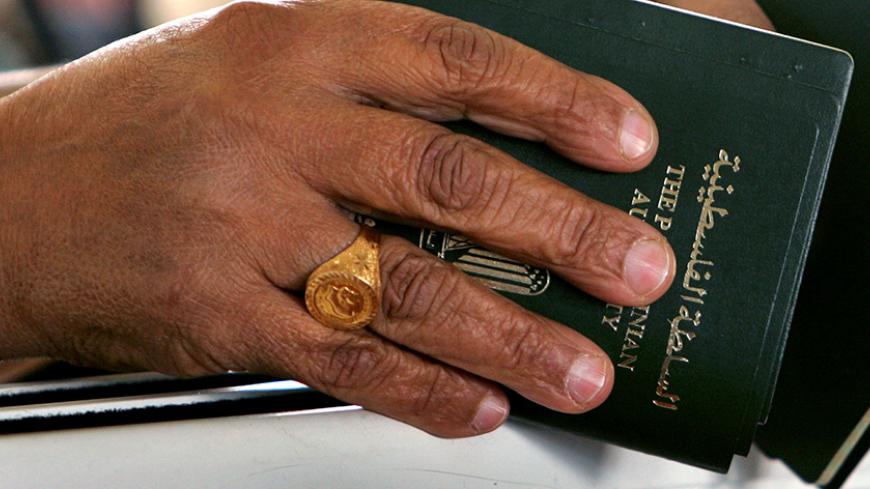 A Palestinian woman holds her passport as she waits to cross the Rafah border crossing in the Gaza Strip, Nov. 27, 2005. - REUTERS/Suhaib Salem

GAZA CITY, Gaza Strip — Palestinian police in Gaza, accompanied by the State Audit and Administrative Control Bureau (SAACB), raided the headquarters of the Palestinian Bar Association on March 16 as a result of disagreements between the parties about the bar’s members’ financial and administrative records. The raid caused the association to suspend its work that day in all courts and institutions and to call in lawyers to its headquarters to defend itself against the police. The following day, the bar staged a sit-in in front of its headquarters.

On March 20, media outlets quoted sources at the Interior Ministry in Ramallah as saying that as a result of the police raid, requests for passports using powers of attorney authenticated by the bar in Gaza would be denied. The bar has been handling many passport issues on behalf of the Palestinian Authority, with which Hamas has been in conflict for years.

Al-Monitor contacted a number of officials at the ministry, but they refused to comment on the matter.

The Interior Ministry in Gaza, run by Hamas, justified the raid of the bar’s headquarters in a March 16 statement citing the bar’s alleged refusal to deal or cooperate with the SAACB for more than four months. Iyad al-Bazm, a spokesman for the Interior Ministry in Gaza, also issued a statement the same day, saying, “The SAACB’s team was attacked by some members of the bar. Several national and Islamic figures and forces looked into the bar’s lack of cooperation. The matter was settled, and the bar handed the SAACB part of the requested statements and the remaining parts will be submitted within a few days.”

Ismail Mahfouz, head of the SAACB, told Al-Monitor, “We have been trying for more than four months now to fulfill our professional duties in terms of auditing this institution’s accounts, just like we audit the accounts of other trade union organizations and the Palestinian Legislative Council in accordance with the powers granted to us by law.” Mahfouz said, “According to the General Audit Office Law No. 17, 1995, and specifically Article 13 of Chapter 4, any stalling or delay by the institution is an administrative violation. Up until March 16, we had not received any files, nor had the bar shown us any cooperation, which forced us to exercise our judicial powers that allow us to confiscate the documents of any institution refusing to cooperate with us, which is exactly what happened.”

Mahfouz said that the SAACB had been able to obtain the administrative and financial documents related to fiscal year 2015 after mediation efforts by the Authority of National and Islamic Forces, and that as part of the agreement, the bar would hand over documents covering previous years.

Ali Alden, a member of the board of directors and secretary of the Palestinian Bar Association, told Al-Monitor, “The SAACB departments affiliated with the Gaza government submitted a request to audit the bar’s financial and administrative records in conformity with the law. They were granted approval and a place was allocated for them to exercise their mission.” He said the bar asked that the audit cover the 2015 fiscal year.

“The bar does not object to the auditing of its documents and complies with the principle of [financial] transparency, but we object to the illegal and unjustified raid of the bar’s headquarters, which represents a flagrant violation of trade union activity and public freedoms in Gaza,” Alden said. The SAACB, according to Alden, had wanted to see documents from before 2015, but the bar did not hand them over because it had sought to only have 2015 documents be audited. This disagreement is what led the SAACB to resort to a police raid.

Shaaban Jarjir, also a member of the bar’s board, warned of the continuation of tensions between the bar and the SAACB and expressed his fear that the closure of the bar’s headquarters could threaten the interests of thousands of Palestinians seeking powers of attorney and official stamps for their passports.

He told Al-Monitor, “After the Palestinian split in June 2007, the Palestinian Bar Association assumed the role of the Foreign Ministry in Gaza, with the consent of the parties to the split, Fatah and Hamas, in order to facilitate citizens’ official transactions, including [authentication] of marriage contracts, ratification of university degrees and stamps for passports and other [affairs].”

Jarjir said that after the Hamas takeover in 2007, many countries had refused to accept formal documents issued by the Hamas government, which led to the bar undertaking some official transactions that would typically be handled by a foreign ministry. He said, “Every day, 800 to 1,000 transactions are processed, and when the Rafah crossing is open for travel, daily transactions increase to 3,000-4,000.”

The National Association of Democratic Lawyers (NADEL) warned of harm to citizens’ basic interests, such as their being denied passport stamps and the necessary certificates and identity documents needed to travel through Palestinian crossings.

Alaa Skafi, a lawyer and NADEL member, told Al-Monitor, “NADEL objects to the police and the SAACB’s illegal raid of the Palestinian Bar Association headquarters in Gaza, which is inappropriate for an institution of such high esteem.”

He said NADEL was the first to object to the financial and administrative report submitted to the bar’s general assembly before the election of a new board of directors in 2015, complaining about the time constraints imposed on bar members to review the report. The report was submitted by the outgoing board of directors to bar members, who commented on it before the election of the new board.

Skafi said bar members' comments on the report raised doubts about the disbursement of some bar funds throughout the previous nine fiscal years.

After the Hamas takeover of Gaza, the Palestinian Authority in Ramallah denied Gazans passports, leaving thousands of Palestinians without travel documents and hindering their movement.

The dispute between the Palestinian Bar Association and the SAACB ended after they came to a consensus, and the bar has resumed its work. Still, Gazans are concerned that the PA will again use the passport issue against them.

Meanwhile, Egyptian media are reporting rumors that the Rafah crossing between Gaza and Egypt will soon be reopened, allowing Palestinians in Gaza to once again travel abroad, assuming they are able to obtain identity papers and passports when needed.