Political and religious authorities in Palestine continue to disagree on visits by Arabs and Muslims from around the world to Jerusalem, split between seeing such trips as defiant support of Palestine and as normalizing relations with Israel. 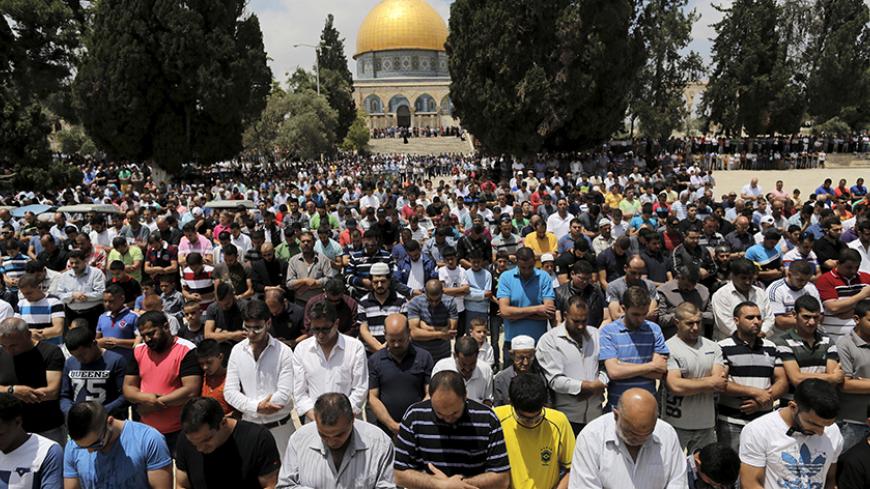 Palestinian men take part in Friday prayers against the Dome of the Rock in Jerusalem's Old City seen in the background, May 29, 2015. - REUTERS/Ammar Awad

RAMALLAH, West Bank — On May 22, a group of worshipers in Al-Aqsa Mosque verbally assaulted Chief Justice of Jordan Ahmed Halil as he headed to give the Friday sermon, accusing him of entering Al-Aqsa under Israeli permission, sparking the old Palestinian dispute over Arab visits to Al-Aqsa under occupation.

Palestinians disagree about Arab visits to Jerusalem from religious and national perspectives. While the Palestinian Authority (PA) encourages such visits — as long as they do not lead to a normalization of relations with Israel — many national and religious figures believe these visits further entrench the Israeli occupation, contribute to the normalization of relations and embellish Israel's image before the world.

This altercation sparked a new point of contention between the Fatah movement, which considered the visit to Jerusalem a move in the national and religious battle, and the Hamas movement, which held that the need to visit Al-Aqsa cannot justify the risk of normalization of relations with the occupation.

Each party relies on religious fatwas that support its point of view. The PA, represented by Mahmoud al-Habash, the presidential adviser on religious affairs, stated, “Visiting Jerusalem is not normalization of relations with the occupation.” He referred to the Council of the International Islamic Fiqh Academy (IIFA), which issued Resolution 216 on visiting Jerusalem, confirming that a Sharia ruling found the act recommended and desirable. On the other hand, some opponents invoke the advisory opinion of the head of the International Union of Muslim Scholars, Yusuf al-Qaradawi, who prohibited Palestinians from visiting Jerusalem under Israeli occupation.

Sheikh Muhammad Hussein, the grand mufti of Jerusalem and the Holy Land, told Al-Monitor, “The jurisprudential aspect of the controversy over the visit to Jerusalem was settled during the 22nd IIFA meeting, which encouraged Muslims and Arabs to visit Al-Aqsa after balancing the benefits and harm of the visit as evaluated by the rulers and politicians in Muslim countries.”

Hussein encouraged Arabs and Muslims to visit Al-Aqsa to boost the morale of Jerusalemites and support them in light of the Israeli attacks against them, based on the IIFA ruling.

Minister of Endowments and Religious Affairs Yusef Idees told Al-Monitor, “The PA managed to break the position rejecting visits to Al-Aqsa and to make sure Arab and Islamic delegations visit it, in order to confer to it an Islamic character in light of the daily incursions of this mosque.” He added, “The PA is currently making contacts with Arab and Islamic delegations to visit Al-Aqsa during the holy month of Ramadan in June 2015, and has received positive feedback.”

Idees said, “The visit to Jerusalem by our fellow Arabs is not normalization of relations with Israel, since this visit carries several implications. By shopping and buying from Jerusalemite merchants and by relaying their suffering to international audiences, the visitors would be boosting our morale and supporting our national economy.”

In the meantime, opponents say the occupation is economically benefiting from Arab trips to Jerusalem.

According to Haaretz, tourism in Jerusalem saw a downturn in 2014, with a 20% decline in the number of hotel stays. The newspaper indicated that the situation could have been much worse if it were not for the massive increase in the number of tourists from Muslim countries, estimated in the tens of thousands.

Jerusalem author and analyst Rasem Obeidat told Al-Monitor, “These visits fall within the scope of normalization. The first beneficiary is the Israeli occupation, since tourists must necessarily pass through it. These visits will benefit the occupation economically, since the latter controls the infrastructure, hotels, restaurants and transportation in the city.”

Obeidat added, “These visits work to embellish the image of the occupation, recognize its legitimacy and sovereignty over the city and portray it as a democratic entity, tolerant of religious freedoms. Yet in reality, Jerusalemites are prohibited from accessing Al-Aqsa and the city is subject to systematic Judaization.”

Jamal Amr, a professor of urban planning at Birzeit University and Jerusalem Foundation member, told Al-Monitor, “Arab visits to Jerusalem are merely a low political ploy exploiting Al-Aqsa to beautify the image of the occupation, which is the only beneficiary from these visits.”

Amr said, “Arabs do not support Jerusalem. This matter is not on their agenda. They keep disappointing this city by falling short on all of the promises they made. Why does [Israeli Prime Minister Benjamin] Netanyahu, who declared that Jerusalem is not the capital of Palestine, allow them to visit Al-Aqsa while preventing Palestinians from doing so?”

Amr pointed out that visitors to Jerusalem do not stay at Palestinian hotels, obtain Palestinian visas or eat in Palestinian restaurants. “All this is a blatant play by the Arab regimes to beautify the occupation and portray it as a democratic entity tolerant of religious freedoms, contrary to reality,” Amr said.

The archbishop of the Greek Orthodox Patriarchate of Jerusalem, Atallah Hanna, told Al-Monitor, “I personally do not encourage these visits, but as a representative of a religious institution I would be embarrassed to refuse any invitation or request to visit. This should be a political responsibility. The objective of the visit determines whether it falls within the scope of normalization or not.”

Hanna added, “The visits of Arab Christians and Muslims holding foreign passports are not interpreted as normalization if they are intended to support the people of Jerusalem. This does not apply to Arabs whose countries have not concluded diplomatic relations with Israel. It is not advisable that they visit Palestine, since this requires Israeli approval, which their countries don’t accept.”

Rwaidy indicated that the city’s financial requirements reach $428 million for three years, but Arabs and Muslims only provided 5% of this amount. He said, “Only 3% of the Arab League Sirte Summit decisions on Jerusalem were implemented, as $50 million were transferred to the city out of the half a billion dollars allocated to it. Moreover, the city did not receive any amount from the $1 billion fund set up for Israel in the summit in Doha.”

At the March 2010 Arab League Sirte Summit, Arab foreign ministers approved a draft resolution submitted by Palestine and Syria. The move was a bid to try to save Jerusalem through support by the Al-Aqsa fund. The fund, started by Saudi Arabia in 2001, held an amount of $500 million.

Regarding the delay in support to Jerusalem, Rwaidy stated, “Arabs and Muslims have abandoned the Palestinians in the fight for Jerusalem and Al-Aqsa. I am talking about the private and public sectors that are turning a blind eye to the pledges they made for Jerusalem. This is clear, as all our calls for Arabs to fulfill their pledges are falling on deaf ears.”

While Palestinians maintain their dispute and debate the merits and dangers of visits to Jerusalem, Israel continues to change the city and its landmarks. Only 13% of Jerusalem is under Palestinian control, while the world's Arabs and Muslims are turning a blind eye and failing to provide real support.