It took Egypt 13 years to create a museum dedicated to literary giant Naguib Mahfouz and now that it has finally opened, many find it not worth the wait. 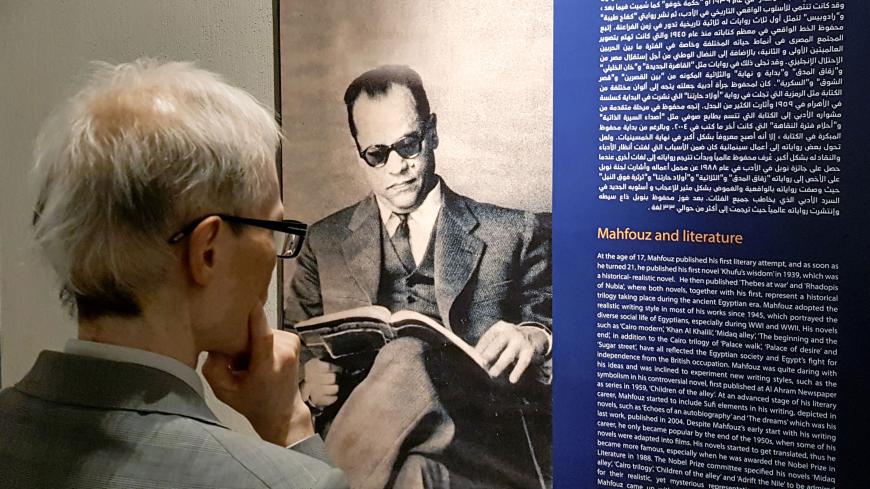 A visitor reads the biography of late Egyptian writer Naguib Mahfouz after the opening of the museum in Cairo, Egypt, July 14, 2019. - REUTERS/Sameh Elkhatib

“Forgetfulness is the plague of our alley,” Egypt’s Nobel laureate Naguib Mahfouz famously said in his 1959 novel, “Children of Gebelawi.” The “alley” was Egypt itself.

Nevertheless, Egypt has never forgotten its best-known writer, who died in 2006 — nor the plans to open a museum about him. It took more than 13 years, with one postponement after another and endless disputes with the writer’s family on what would be featured there. Finally, the museum was opened on July 14, with the ministers of culture and antiquities as well as members of the Egyptian intelligentsia in attendance. But both opening and the museum itself were harshly criticized, leading some writers to comment that perhaps the plague of Egypt was not forgetfulness, but sloppiness.

The museum is housed in the three-story Abu El-Dahab complex in Cairo’s Al-Azhar neighborhood. The Mamluk-era building is on the busy Imam Muhammad Abdo Street but its gate there is closed, so visitors have to go through a narrow side street that is known for housing such stinky businesses as butchers and bird traders. The lack of signage for the side entry makes finding the museum something of a treasure hunt and prevents any chance visitors from noticing the museum dedicated to Egypt's only Nobel laureate.

But once inside the building, visitors are welcomed by a large collection of the life and works of Mahfouz. The first floor contains several seminar halls an audiovisual library of Mahfouz' works and a public library for his works as well as those of other authors and many critical treatises and studies about Mahfouz' work and life.

The second floor contains eight halls displaying awards received by the author. They include a Nobel Prize in literature, an honorary doctorate from Cairo University, the State Appreciation Award — the highest literary, artistic and scientific prize in Egypt — an honorary presidency of the Union of Egyptian Writers, a certificate of appreciation from the American Academy of Sciences and Arts and many insignias, most notably the Nile Necklace, the highest honor offered by the Egyptian state.

A larger hall on the same floor displays some of his personal belongings — such as his pack of cigarettes, glasses, pens and a suit. Another hall exhibits his desk and a mini library of some of his most valuable books.

In the showrooms, there are two documentaries on permanent exhibit. One is a film of Mahfouz' life residing on the streets of Al-Azhar, Al-Jamalia and Al-Madak alley, all of which inspired his novels about life in Egypt. The second is a collection of clips from movies inspired by his novels.

When Al-Monitor went to visit the museum a few days after the opening, there were only two other visitors: Ibrahim and Dalia, who asked that their last names not be used.

Dalia praised the museum, saying that she was happy to have a place in Cairo to preserve Mahfouz’ literary heritage and collections. She told Al-Monitor that though there is room for improvement, the fact that the museum was at last opened is a reason for celebration.

Her husband, Ibrahim, was more critical of what he called “the traditional style of the exhibitions.”

“Many imagined that the museum would be an innovative one that would display all the spaces that shaped Mahfouz’ life — such as his home, office or the Egyptian neighborhood he loved — with his possessions displayed in a creative way,” he said. “But this museum simply turned out to be a modest store that displays [a mere fraction of his] possessions.”

Ahmed Shawkat, a culture journalist from the Lebanese newspaper Al-Akhbar, criticized the Ministry of Culture in a report called "Naguib Mahfouz Museum: A Scandal in Cairo," saying that the museum lacked many of the writer's key possessions. Similarly, Mohammed Shoair, also from Al-Akhbar, wrote in a Facbook post that a huge carpet given by former Tunisian President Zine El-Abidine Ben Ali to Mahfouz in the 1990s — given to the museum by the family — was replaced by a cheap imitation in the exhibit.

In a previous interview with Al-Monitor, Ahmed Emad Al-Abboudi, a businessman and a close friend of Mahfouz, said that the museum was supposed to contain drafts of Mahfouz' novels that show how the famous writer researched and developed his characters, places and plots. He pointed out that these drafts are important material for novelists and researchers in the field of literature because they show how novels evolve.

Karim El Shaboury, who designed the museum, told Al-Monitor that many of the writer’s objects, most notably the Ben Ali carpet, are not exhibited because of a lack of space, and a duplicate had to be used. "We had to prioritize. We thought it would not be right to prioritize the carpet — despite its material and historical value — at the expense of the Nile Necklace or Nobel Prize certificate,” he added.

He said that the exhibit space will increase, as the Ministry of Culture decided to move the administrative offices outside the museum and allocate the third floor to the exhibits.

Youssef Qaeed, an Egyptian novelist and close friend of Mahfouz, told Al-Monitor that he was happy the museum finally opened, but he hopes that it will be improved further and the main gate will be opened. “The first step would be to create awareness and increase the number of visitors,” he said, suggesting that the museum be promoted among foreign literary circles.