Naguib Mahfouz to finally get his Palace of Desire

Despite repeated promises, the Egyptian government has postponed the opening of a museum honoring the Nobel laureate — until now. 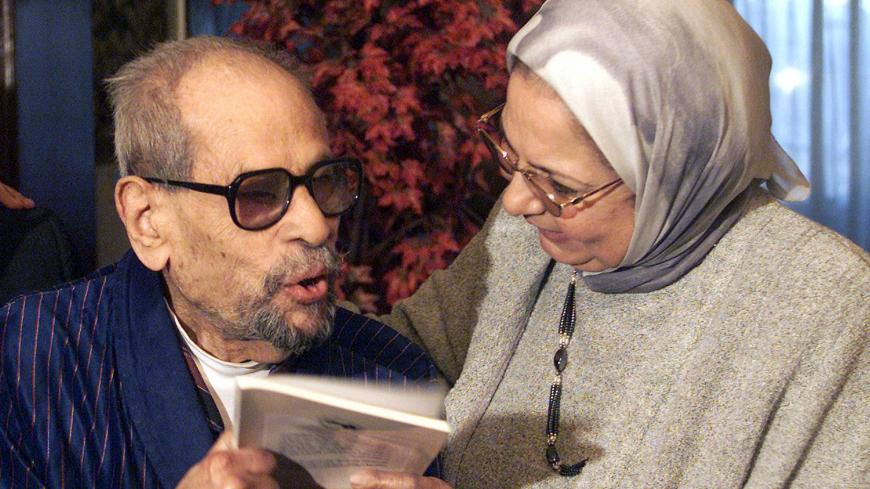 Egypt's Nobel laureate in literature Naguib Mahfouz talks with Salwa al-Aanani, the author of his latest biography, after receiving the book a day before his 90th birthday in his home in Cairo, Egypt, Dec. 10, 2001. - REUTERS/Aladin Abdel Naby

Egypt has stepped up efforts to open a museum to honor its 1988 Nobel Literature Prize laureate Naguib Mahfouz by the end of the year.

Namnam had promised to open the museum in December 2016, in time for the writer’s 105th birthday, but did not deliver. He argued that the delay was due to renovations at Muhammad Bek Abu El Dahab Complex, even though the alternative venue at Beshtak Palace was available. He repeated his promises on Aug. 10, asserting that the museum will open in December.

“The museum will feature Naguib Mahfouz's office, library, awards and medals, and thousands of photos. I have hundreds of photos that I will give to the museum when it opens. It will also include the drafts of his novels as well as sketches of the characters he developed in his novels,” Ahmed Emad al-Aboudi, an author and businessman who was close to Mahfouz, told Al-Monitor on the sidelines of an Aug. 29 symposium titled "Naguib Mahfouz: The Novelist and The Man,” organized by Ruwad al-Zohour Club in Cairo.

The idea of the museum dates back to 2006, the year Mahfouz died, when Farouq Hosni, back then the Egyptian minister of culture in the government of former President Hosni Mubarak, issued a decree on the opening of the museum. While Muhammad Bek Abu El Dahab Complex, an archaeological site near Al-Azhar area in ​​Old Cairo, was chosen as the location for the museum, construction did not start.

Explaining why the museum project had yet to see the light, a leading source in the Ministry of Culture told this reporter on condition of anonymity at the time, “The choice of Muhammad Bek Abu El Dahab Complex was not successful because the premises needed about 20 million Egyptian pounds [around $1.1 million, at today's exchange rate] worth of renovations, a budget that the ministry lacked. But that did not relieve the ministry of its responsibility, as it would have been able to obtain funding from global cultural bodies such as UNESCO and others to restore the premises and open the museum. However, negligence prevailed.”

On Jan. 29, 2013, the Ministry of Culture opened the Museum of Cultural Memory and displayed a limited number of Mahfouz's properties and manuscripts, along with dozens of properties of Egypt's art and culture pioneers such as Egyptian singer Sayed Darwish, theater actor Amin Attallah and film actor Ali al-Kassar. Although this museum was opened under the rule of former President Mohammed Morsi and the Muslim Brotherhood — in power from June 2012 to July 2013 — preparations for its establishment had begun in 2012, when Intesar Abdel Fattah, the head of the National Center for Theater, proposed the idea to ​​Mohamed Saber Arab, the minister of culture at the time. Arab was enthusiastic about the proposal and approved the budget financial allocations for the museum before the Muslim Brotherhood came to power.

However, plans for the Naguib Mahfouz Museum stopped completely after Alaa Abdel Aziz, affiliated with the Muslim Brotherhood, became the minister of culture, replacing Arab.

In this regard, author Youssef al-Aqeed, who was close to Mahfouz, told Al-Monitor, “The Brotherhood hated Mahfouz and tried to kill him. They say they are innocent, but they never denounced his assassination attempt in 1995. The museum project was suspended in the era of the Muslim Brotherhood. It was activated again after the fall of the regime on July 3, 2013.”

When President Abdel Fattah al-Sisi took power, higher budgets were allocated for cultural projects. That, however, did not expedite the completion of the museum. Renovations of Abu El Dahab Complex were slow considering the lack of budget allocation for the Ministry of Antiquities and the insistence by Arab, who was the minister of culture again then, on establishing the museum in Abu El Dahab Complex.

In 2015, Minister of Culture Abdel Wahid al-Nabawi decided to move the museum project to Beshtak Palace. Days before leaving his post, he promised the museum would open in December 2015. However, his successor, Namnam, who remains in office, brought the museum project back to Abu El Dahab Complex.

Aboudi said, “Invoking financial budget approvals as a cause of delay for the establishment of the museum is unacceptable. Renovating Abu El Dahab Complex and honoring Naguib Mahfouz are the duties of the ministries of culture and antiquities, regardless of financial resources. There are several projects to honor Mahfouz, which would bring the state millions of dollars that may be spent on the establishment of the museum.”

He added, “I proposed to Minister of Culture Helmy El-Namnam to commemorate the memory of Naguib Mahfouz worldwide by organizing seminars, in collaboration with winners of the Nobel Prize in Literature from around the globe, actors who participated in films based on Mahfouz’s novels as well as his friends. The proceeds collected from the participation fees in these high-profile intellectual seminars would be very lucrative. This is in addition to the project of turning the neighborhoods and historical sites featured in Mahfouz’s novels into tourist attractions.”

Aboudi concluded, “The lack of interest in the Naguib Mahfouz Museum reflects a poor awareness of the importance and value of Naguib Mahfouz.”