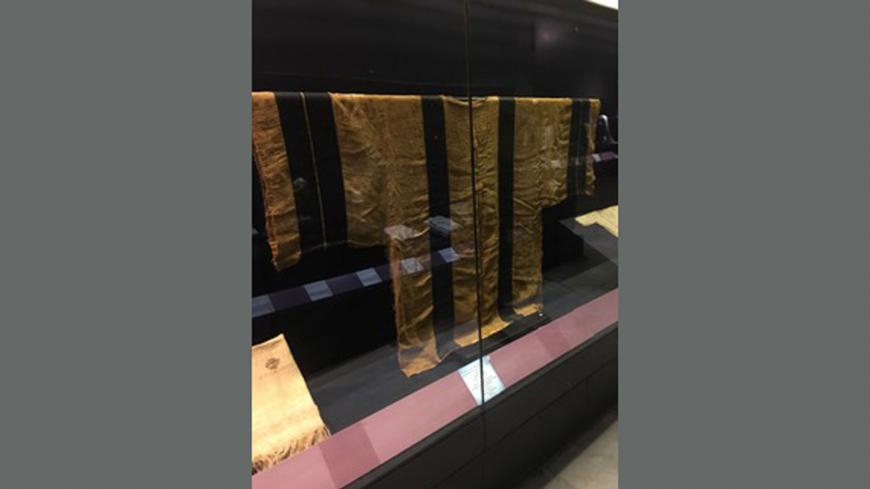 CAIRO — The Egyptian Textile Museum, an Ottoman-style building located at the heart of Islamic Cairo, pays homage to the country’s Christian heritage by displaying rare and ancient Coptic textiles that date from the fourth to seventh centuries CE.

The exhibition, titled “God is Love,” opened Jan. 2 in anticipation of the Coptic Christmas, which is celebrated on Jan. 7. The exhibition will run until March.

The museum’s general director, Ashraf Abol Yazeed, told Al-Monitor that the exhibition is part of the museum's efforts to tie its exhibitions to special events and festivals shared among the different religions in Egypt. “We have displayed some textiles from the Sacred Chamber of the Prophet to celebrate his birthday [in November]. [For Christmas], we organized an exhibition of Coptic textiles. Some of the works displayed show that Ancient Egyptian art influenced early Coptic art,” he said.

The textiles were found in el-Bagawat, an ancient Christian cemetery at the Kharga Oasis in southern-central Egypt. This cemetery, one of the oldest in the world, was excavated between 1907 and 1932 and many important artifacts of the early Coptic era were discovered, such as pottery and personal items such as combs, writing utensils and textiles. Some of the textiles were sent to the warehouses of the Egyptian Ministry of Antiques, and then given to the Museum of Textiles after its foundation in 2010. Other pieces from those excavations can be seen in Western museums including the Metropolitan Museum of Art in New York.

Deputy Director Farag Mghawri told Al-Monitor that five of these early Coptic textiles in Cairo are being displayed for the first time.

One of the five new pieces is a child’s headpiece made of cotton and red and blue wool. It bears an ankh, a symbol of life in ancient Egyptian culture. In early Coptic art, however, the ankh was used to signify the Christian cross. The early Copts feared persecution for converting to Christianity, so carefully refrained from using traditional crosses. Only in later eras did Coptic artists start drawing or weaving crosses into their works.

The displayed items also include funeral robes. Mghawri explained, “A very loose robe embroidered with blue wool used to be placed on the mummy when it was buried. Other apparel, decorated with crosses and beautiful Coptic designs, was used during holidays and funerals. The displayed pieces also include a child’s robe decorated with threads of wool in magenta and loose warp threads. We also display a linen cover used in a home.”

Mokhtar al-Kasbani, a lecturer on Islamic and Coptic Antiquities at the University of Cairo, told Al-Monitor, “Coptic cemeteries, especially those discovered in the Western Desert, have provided us with many early Coptic textiles,” he said. “The style of the Coptic textiles further evolved with the emergence of Islam in Egypt.”

He noted that the textile production, weaving and dyeing was strong among the Ancient Egyptians, and modern Egypt is also known for its top-quality linens and textiles. He added that the Copts in Egypt are still active in the textile sector. “Textile production in Egypt has developed thanks to the skilled hands of Copts,” he said. “They participated in creating the cover of the Holy Kaaba and that of the Prophet’s grave.”

Tour guide Saleh Adel told Al-Monitor that the Egyptian Textile Museum is housed in a building built in 1822 by Mohammad Ali Pasha in honor of his son Ismail. Later, it became the Nahaseen Primary School, whose alumni included writer Naguib Mahfouz and President Gamal Abdel Nasser.

The building was renovated from 2005 to February 2010, when it was reopened as Egyptian Textile Museum. Currently, the museum holds textiles from the Pharaonic to the Islamic eras. It boasts an impressive collection of belts, mummy linens and even diapers from the Pharaonic era with statues that display different dress according to their place in society. The Roman and Coptic collections are relatively small, while the Islamic section is larger and has a special room for the Kaaba cover that dates to the time of King Farouk.

The museum's 11 halls take visitors on “a journey through time," Adel said. "A history of Egyptian textiles that begins with the Pharaoh era, passes through the Coptic and Islamic eras and ends with the modern day.”

Visitor Umeima Tammam told Al-Monitor, “When I heard about the exhibition, I was curious to see the ancient Coptic textiles. Although I visit Al-Moez Street occasionally, I never thought about entering the Egyptian Textile Museum.”

Though the museum is located on a busy street frequented by tourists, it is not well known. Yazeed, the museum’s director, hopes that will change, “Through activities and regular events, Egyptian museums seek to instill love for museums in the hearts of Egyptians. We have significantly succeeded with university students and children in the past few years.”