The Egyptian military's crackdown on terrorist operations in the Sinai Peninsula force the Islamic State's Wilayat Sinai to shift some of its focus from military targets to the civilian population and local businesses. 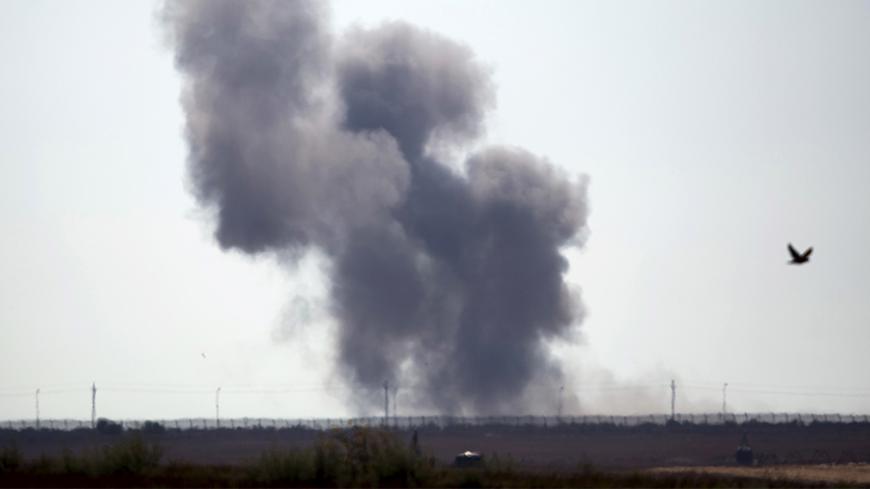 The Islamic State (IS) is shifting tactics in the Sinai Peninsula: If it’s too difficult to attack military positions, it targets civilians.

The IS affiliate in Sinai, known as Wilayat Sinai, is playing up military shows of force and increasingly intimidating and targeting civilians there. The majority of the terrorist organization’s previous attacks fiercely targeted military positions. Military positions are still being targeted, but the number of attacks has noticeably shrunk.

One of Wilayat Sinai’s largest attacks came July 1, when car bombs targeted security checkpoints in Sheikh Zuweid. According to a statement from Egyptian army officials issued shortly after the attacks and cited by the Associated Press and Reuters, 17 soldiers and more than 100 militants died.

Wilayat Sinai claimed responsibility for the beheading of more than one citizen in November and this month. Moreover, it organized multiple military parades in February, apparently designed to intimidate citizens, which ended in the Egyptian armed forces killing 35 of its members.

Retired Maj. Gen. Hisham al-Halabi told Al-Monitor there are several reasons why Wilayat Sinai is targeting citizens and flexing its muscles to intimidate them while the number of attacks against military targets has decreased. The reasons include the armed forces’ tightened security measures around military positions, the crackdown on organized terrorist operations in general, and Wilayat Sinai ​’s attempt to show its strength to the outside world and financial backers.

Statistics in 2015 confirmed that terrorist organizations in Egypt have become more aggressive than ever before. The number of terrorist attacks reached 617 in 2015, compared with 349 in 2014, according to the Cairo index of stability by the Regional Center for Strategic Studies.

According to the same index, Sinai’s statistics are among the worst in Egypt, as the number of terrorist attacks there reached 90 in 2015. Yet details of the index confirmed there was a crackdown on terrorist organizations following the attacks on Sheikh Zuweid: The total number of terrorist attacks in Egypt from August to December 2015 dropped significantly to 64, compared with 170 in the same 2014 period.

This decline in Egypt in general was certainly reflected in Sinai, according to Halabi, as Sinai held a 15% share of the total number of terrorist attacks in 2015.

Halabi said terrorist organizations have well-known concealment strategies, one of which is to hide among citizens. He added that the groups deliberately terrorize citizens to prevent them from cooperating with security forces and reporting them.

In this regard, a March 1 statement attributed to Wilayat Sinai said the organization beheaded Radi Suleiman Salem, a Sinai citizen, and shot his son to death allegedly for "cooperating with the army to monitor the movements of the organization’s members and report them to security services.”

The intimidation is not restricted to individual citizens; the group also targets workers at some Sinai businesses. A statement attributed to Wilayat Sinai circulated in December among ambulance workers in northern Sinai, warning them against transferring injured security personnel to hospitals.

In October and November, Wilayat Sinai hijacked ambulances and injured drivers at the facility, looted an aid post on the international road in eastern el-Arish, and destroyed an aid post that was under construction in southern Sheikh Zuweid.

According to Halabi, IS and its branches, including Wilayat Sinai, are armed at a level unprecedented in the history of terrorist organizations, which he said shows the group is backed by agencies and countries. He pointed out that IS must show the funding states its strength and control so that money will continue to flow, or else succumb to the Egyptian armed forces’ growing threat.

The World Economic Forum’s Global Competitiveness Report published in September said Egypt has moved up slightly in its rankings. The report credits several factors for the improvement, including security, but said security is still “an important hindrance to economic growth.”

Halabi said that to counter the terrorists’ concealment among citizens, the country’s Sinai development plans should be coordinated with the military and security crackdown on terrorism. Egyptian President Abdel Fattah al-Sisi recently reiterated plans he announced a year ago to spend 10 billion Egyptian pounds ($1.28 million) on Sinai development.

Yet the above does not mean that the direct war between Wilayat Sinai and the Egyptian armed forces has ended or that it has become limited to shows of force and targeting workers at some facilities. Rather, terrorist attacks are still haunting military stations and soldiers. A series of attacks was carried out recently on March 5-7, killing 12 members of the armed forces, according to a statement by Wilayat Sinai. Yet these attacks were preceded by a period of calm, ranging between five to seven days. This period of time is longer than the one separating the attacks in 2014 and 2015, when more violent attacks were conducted on almost a daily basis at some security checkpoints.