After Egypt recently declared independent trade unions invalid, many groups said they will fight the decision on the grounds that it violates the constitution. 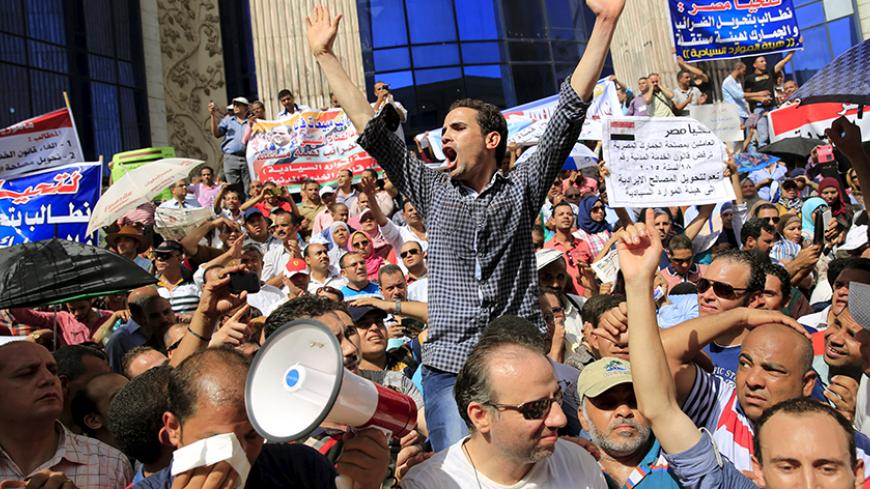 Staff and workers of Egypt's Ministry of Finance Tax Authority shout slogans during a protest in front of the Syndicate of Journalists in Cairo, Aug. 10, 2015. Trade union workers staged the protest to demand the abolition of the Civil Service Law and a minimum and maximum wage for public servants. - REUTERS/Amr Abdallah Dalsh

CAIRO — In what many critics see as an effort to eliminate union organization in Egypt and undermine all constitutional articles guaranteeing the right to establish trade unions, the state on March 1 declared that the stamps of independent trade unions will no longer be valid on official documents. The decision prohibits dealing with independent trade unions and considers them illegitimate entities.

With time, the independent trade unions’ influence increased, as members elected their leaders and saw them as rights advocates. Workers abandoned the pro-government Egyptian Trade Union Federation (ETUF), which failed to unite them under its umbrella.

The Interior Ministry said the Ministry of Manpower had asked for the unions to be invalidated because they are not subject to the provisions of Law No. 35 of 1976 on trade unions, which prohibits union pluralism.

Article 13 of that law states that workers in the same occupational groups or industries, or in industries correlated to each other or jointly working for the same production, can only form one trade union across the republic and no other.

Hani Afifi, vice president of the Egyptian Democratic Labor Congress (EDLC), which is an independent alliance of unions, told Al-Monitor, “This law is faulty and has no value, as it contradicts constitutional Article 76, which allows trade union pluralism and guarantees workers’ right to establish trade unions upon notifying the concerned authority. Constitutional provisions are the important thing for us, and the government needs to adjust its situation according to the constitution and refrain from implementing a law that contradicts the constitution.”

Constitution Article 76 states that the establishment of federations and trade unions on a democratic basis is a right guaranteed by the law. The article says unions shall have legal personality, operate freely, contribute to higher competencies among its members, advocate for their rights and protect their interests. The article also says the state shall guarantee the independence of trade unions and federations, and their boards of directors shall not be dissolved without a court order.

“We have in the [EDLC] congress 125 independent trade unions and more than 800,000 workers, all of whom left the ETUF and decided to join us. The federation did not offer them anything and workers did not even elect their representatives, so how could ETUF be representative of workers in the state?” Afifi said.

He added, “Why does the state refuse to implement the provisions of the constitution and continue to procrastinate on issuing the laws on freedom of association, which the ministry had announced two years ago? Why is the state trying to suppress workers with an outdated law from 40 years ago, which was canceled in the [2014] constitution? We will not be affected by these measures and we will continue to fight for our usurped rights and exercise the freedoms of association to the fullest, as per the constitution."

In January, the Permanent Conference of Alexandria Workers launched a campaign dubbed "Together for Freedom of Association” calling on the government to yield to workers’ demands and implement the constitution’s provisions regarding the freedom to establish trade unions unconditionally.

The campaign has said it will take clear steps to pressure the government, including organizing seminars and meetings with workers from across the country’s different governorates, and collecting their signatures on a petition rejecting the decision. The campaign also plans to file lawsuits against the Ministry of Manpower for violating the constitution.

In press statements March 16, Khaled Tosoun, vice chairman of the Permanent Conference of Alexandria Workers, called upon the state to reject its thinking, which he said is negatively affecting its economic situation; to implement the international labor agreement it had signed; and to openly declare its support for the working class and workers’ right to establish independent unions.

Egypt is a signee of the International Labor Convention No. 87 for 1948, which states in its second and third articles that workers have the right to establish unions and organizations of their choice unconditionally, to set their bylaws and regulations and organize their administrative affairs and activities in full freedom. The convention’s Article 8 stipulates that the country’s laws shall not prejudice the provisions of the agreement.

Article 93 of the constitution says the state shall be bound to the international agreements, covenants and conventions on human rights ratified by Egypt, which shall enter into force after publication in accordance with the established procedure.

Abdel Monem al-Gamal, the ETUF deputy chairman, made scathing comments to Al-Monitor against the independent unions, calling upon them to respect the law and rejoin the federation, which is the only union legally recognized by the state.

“Law No. 35 of 1976 is the only law governing the establishment of independent trade unions and federations. The government has yet to amend it in accordance with the constitution. So until the government passes the new law, the independent unions are void and invalid,” he said.

About the accusations against that ETUF has not offered workers any benefits for the past 60 years, Gamal said, “If the ETUF has done nothing for workers, could anyone tell me what the independent unions have offered workers over the past five years since their establishment?

"Unfortunately, some workers have exploited the chaos that followed the January revolution to create fake entities, obtaining funds from abroad without any control. Today, we have to correct the path by operating under the umbrella of the official federation exclusively.”