A court ruling in Egypt has criminalized the right to strike, which not only violates the Egyptian Constitution, but also the UN’s International Convention on Economic, Social and Cultural rights. 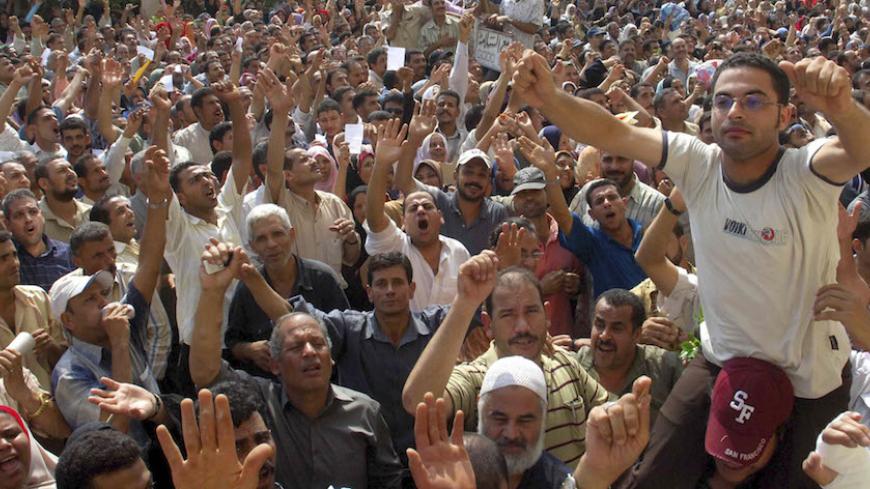 CAIRO, Egypt — The ruling issued April 28 by the Supreme Administrative Court headed by Judge Labib Halim to criminalize strikes and penalize striking public workers by forcing them into retirement caused an uproar in legal circles and provoked the anger of those interested in labor and human rights. Labor and human rights activists considered the decision to be a violation of Egypt’s commitment to the International Convention on Economic, Social and Cultural Rights adopted by the United Nations in 1967; in October 1981, Egypt signed the convention, which allows for the right to strike. Moreover, the ruling violates the Egyptian Constitution of 2014, which granted the right to peaceful strikes.

The Supreme Administrative Court decision forces three officials in the local unit in Qarous, in al-Monufia governorate, into retirement. It also postponed the promotion of 14 others for a period of two years, after investigations carried out by the administrative prosecution showed that they went on strike and disrupted the facility’s ability to fulfill the interest of citizens. The three officials had participated in the strike and locked the door to the unit, barring the head of the unit from entering. The local unit handles the establishment and management of all public facilities in its constituency.

The ruling noted that there were conditions on the implementation of the International Convention on Economic, Social and Cultural Rights, which was signed by President Anwar Sadat. These conditions were put in place by Presidential Decree No. 537 of 1981, which requires taking into account the provisions of Islamic Sharia law when implementing the covenant and ensuring that it does not contradict Sharia law.

The court added that the provisions of Sharia law confirm that if a strike leads to those benefiting from public services incurring damages, Islamic law does not permit striking because of the harm it causes citizens. This is considered erroneous jurisprudence of Sharia law.

The gravity of this ruling lies in the fact that it is not merely a judgment concerning an individual incident. Rather, it has become a judicial principle that the prosecution will rely on in similar cases. This will deprive workers of the right to strike, which is generally recognized throughout the world.

In this regard, Tharwat al-Badawi, a professor of constitutional law at Cairo University, told Al-Monitor, “The ruling violates Article 73 of the 2014 Egyptian Constitution that grants workers the right to strike.”

Badawi pointed out that whenever the constitution grants a particular right, the administrative court is allowed to put in place mechanisms to regulate this right. However, according to Badawi, the court, by criminalizing the right to strike, has violated the right itself, which is not within its purview.

Regarding the absence of a law governing the right to strike, Badawi said that since the constitution is the main source of all laws, if it grants a particular right, then this right must be allowed.

Al-Monitor spoke with Karima al-Hafnawi, a leader in the Kefaya Movement — one of the largest protest movements that contributed to the ouster of the Mubarak regime — and a founder of the Hemaya Movement, which is concerned with the rights of workers and the public sector. “All the rights workers have obtained throughout the world have come through demonstrations and strikes. This ruling prevents Egypt’s workers from their right to peaceful expression in confronting the injustice, oppression and poverty inflicted upon them,” she said.

Hafnawi warned that this obstinacy and restriction on workers, and robbing them of their right to peacefully strike, could set off waves of anger that may have dire consequences. Hafnawi attacked the Egyptian Trade Union Federation (ETUF), which presented a “Labor Honor Code” to President Abdel Fattah al-Sisi on the occasion of Labor Day on May 1. The code emphasized the importance of working in the ushering in of Egypt’s future.

The document said, “Egypt’s workers reject striking and confirm their commitment to social dialogue with the government and business owners as a mechanism to achieve social justice and stability and to entrench their concepts, and work to overcome the obstacles that prevent their implementation.” The honor code also stressed the importance of dialogue on all issues and levels, to ensure the stability of labor relations, security and social peace.

“The ETUF does not express [the views] of Egyptian workers; rather it is loyal to the government. It follows the same path of hypocrisy and praise of the ruling regime that it did during the era of ousted President Hosni Mubarak, without acting in the interest of workers,” said Hafnawi.

The deputy head of the ETUF, Magdy al-Badawi, told Al-Monitor that the federation is in a real predicament following this ruling. He said that while the ETUF believes that striking is a right for workers and a means of balance in negotiating workers’ rights, the initiative the ETUF presented to the state via the labor honor code — which rejected striking at the current time — came in light of the fact that the Egyptian state is in a stage of reconstruction, and strikes cause major losses to the economy.

“Striking is a means, not an end; thus the ETUF has taken a first step toward achieving the stability required to build the nation. Now it is up to business owners and the state to take similar steps to create a mechanism for negotiating and maintaining workers’ rights, without losses being incurred by either side,” he said.

Badawi called on Sisi, in his capacity as the one who currently holds legislative authority, to issue laws governing the right to strike.

Negad al-Borai, a lawyer, human rights activist and chairman of the Group for Democratic Development, told Al-Monitor that “this ruling highlights the use of the judiciary for political purposes.” He added that there are a group of judges who use their personal ideas and beliefs in issuing rulings that violate the law and the constitution, which has led to the current confusion. He said that these rulings also adversely impact the image of the Egyptian state, as was evident in the rulings for mass execution and severe punishment for youths who participated in the revolution.

Borai added, “President Sisi still enjoys a degree of popularity, and Egyptians accept some of these things on the basis that they are paving the way for improvement. However, if [citizens] don’t perceive any improvement, the situation could flip. Such rulings take away from [Sisi’s] popularity to a great extent, and if the situation persists in Egypt in the same manner, he will have no noticeable popularity six months from now.”

Meanwhile, labor leader and former MP Abdul Rahman Khair told Al-Monitor, “This ruling is just the latest episode of terrorism against public employees, following the new civil service law that includes no provisions for negotiating or complaining. Even resorting to the judiciary must now be done through the competent entity. Thus, state employees cannot complain or strike, and must accept the status quo regardless of the injustice they face.”

A violation of the constitution lays the foundation for a lack of rights in society, and constitutes a flagrant violation of rights and freedoms, providing a possible signal of impending popular anger.