Egypt’s parliament approved a draft law on the regulation of trade unions, which independent unions criticized for failing to protect the workers’ right to association. 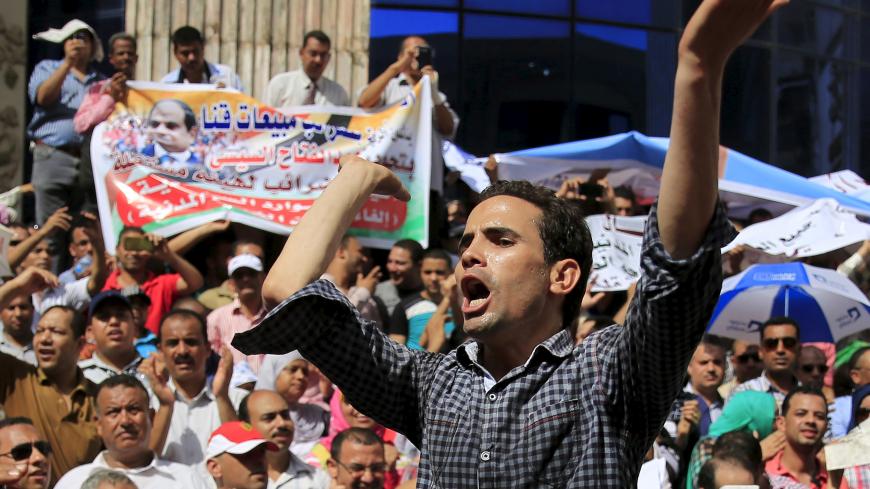 Trade union workers staged the protest to demand the abolition of the Civil Service Law and a minimum and maximum wage for public servants, Cairo, Egypt, Aug. 10, 2015. - REUTERS/Amr Abdallah Dalsh

CAIRO — The Egyptian parliament approved Dec. 5 the trade union draft law that has been widely criticized by Egyptian independent trade unions as furthering strict government control over these groups, raising questions about the future of the labor movements in Egypt.

Maysaa Atwa, a member of the parliament's Manpower Committee, told Al-Monitor that one step toward the formal adoption of the draft remains, and that the draft law is scheduled to be submitted to the president for ratification before being published in the Official Gazette to enter into force.

Egyptian Minister of Manpower Mohamed Saafan said in a press statement Dec. 6 that the draft law provides workers with the right to form trade unions, and to join or withdraw from them. According to Saafan, the law is in line with the International Labor Organization (ILO) standards and conventions ratified by Egypt in regard to the freedom of association.

Yet independent trade unions’ officials and human rights activists said the draft law recently approved by parliament reinforces government control over Egyptian workers and sets impossible conditions for the creation of trade unions. In a statement issued Nov. 7, the International Trade Union Confederation called on the Egyptian government to withdraw the draft, considering it a flagrant violation of ILO Convention No. 87 on Freedom of Association.

According to the draft law's second and third articles, the trade unions formed by and affiliated with the Egyptian government, such as the Egyptian Trade Union Federation, will remain in place, while forcing the independent unions to dissolve and settle their status within 60 days after the law enters into force. The independent unions would need to submit again their documents to the Ministry of Manpower to be approved as per the conditions set by the new draft law.

Officials from independent unions and observers believe this move paves the way for merging these unions into government-controlled unions.

Independent trade unions mostly emerged after the January 2011 revolution when the new Egyptian government issued the Declaration of Union Freedoms. These unions continued to work side by side with the government’s organizations until March 2016, when the government at the time refused to recognize them and considered them illegitimate entities. This move prompted the unions to resort to the judiciary and submit a case against the government to the Egyptian Administrative Court. The latter referred on Nov. 27 the case to the Supreme Constitutional Court, which has yet to issue a verdict.

The general coordinator of the Center for Trade Unions and Workers Services and member of the Egyptian National Council for Human Rights, Kamal Abbas, told Al-Monitor that the draft law did not bring anything new to the table. It is similar, he added, to the 1976 law regulating the work of trade unions in Egypt that undermined union freedoms as it banned the formation of independent trade unions. The 1976 law was one of the reasons that pushed the ILO to include Egypt on its blacklist over violations of trade unions freedoms for four times, most recently in June.

According to the new draft law, trade unions are created in a hierarchical form, starting at the base with the trade union committee (one committee at the governorate or city level), the general union (one trade union at the profession or industry level), and ending at the top with the Egyptian Trade Union Federation (one federation at the national level).

Abbas explained that the draft law has kept the formation of the pro-government Egyptian Trade Union Federation, while it will lead to the dissolution of the independent unions formed over the years. After their dissolution, these unions would then join a single multi-level trade union organization in violation of Article 76 of the Egyptian Constitution guaranteeing the independence of trade unions and federations.

Defending the content of the law, Atwa said, “All independent and international trade unions discussed the draft with us, and we told them explicitly that Egypt faces an existential war" — in reference to its war on terrorism and an economic crisis — "and it is not right to be divided, or for the workers of Egypt to have more than one union.”

She added, “If more than one trade union exists within one industrial facility, it will negatively affect the entity and the development of the state, and we will become an anarchic country. The draft law is easy to amend, but at the moment, it cannot be modified as required by independent unions. It is thus better to remain under one umbrella — namely the Egyptian Trade Union Federation — for the stability of our country, our companies, our organizations and our factories.”

Presidential candidate Khaled Ali criticized the draft law during a seminar Dec. 2 at the headquarters of the Bread and Freedom Party he leads, saying, “[The draft law] imposes control over the trade union organizations and strikes their independence.”

Nadine Abdalla, a researcher at the German Institute for International and Security Affairs in Berlin, said in a Dec. 7 article in the Egyptian daily newspaper Al-Masry Al-Youm that although the draft law in its new form is considered progress compared to the 1976 law, it imposes restrictions on the right to organize.

Abdalla explained that according to Article 11 of the draft law, a quorum of 150 members is required to establish a trade union committee. This means that small private sector enterprises, which constitute the majority of this sector in Egypt, will not be able to establish trade union entities that defend their rights.

She continued, “The draft law prevents the creation of small trade unions and undermines competition among unions, in favor of the trade unions affiliated with the Egyptian Trade Union Federation. Also, the draft does not guarantee the integrity of trade unions’ elections, neither in the federation nor in the new unions.”

When asked about the measures that shall be taken in response to this draft law, Abbas said, "We will do whatever it takes to deal with the draft, and we will send a memo to the president of the republic asking him not to ratify it and return it to parliament. If ratified, we will challenge the draft before the Supreme Constitutional Court.”