How Sisi is trying to win votes of informal sector workers

As presidential elections approach, Egyptian President Abdel Fattah al-Sisi called for an initiative to provide insurance for irregular workers who have no social security, pensions or health coverage. 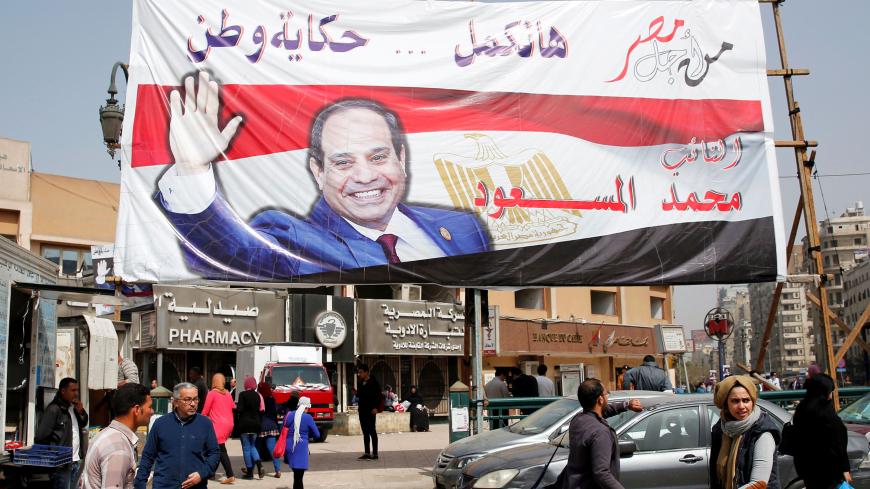 CAIRO — Egypt's parliamentary Labor Committee held a meeting Feb. 19 to discuss the implementation of an initiative on the rights of the irregular labor force. The meeting followed President Abdel Fattah al-Sisi’s call on Feb. 8 to provide insurance for irregular workers who have no social security, pensions or health coverage.

The parliament committee recommended the creation of a special committee for the irregular labor force, drawing in the ministries of Labor, Social Solidarity and Health, alongside the public sector, the Ministry of Finance, the Federation of Egyptian Industries, the Egyptian Trade Union Federation, Egyptian Federation for Construction and Building Contractors and the National Population Council. The aim of the committee would be to study the legal treatment and status of irregular workers, while providing social security and health insurance coverage, with the possibility of establishing a specific independent body for such type of labor.

Mohamed Wahab Allah, the Labor Committee’s vice president, told the press following a parliament session on Feb. 19, “We recommend the formation of a committee by the concerned parties to discuss the establishment of an independent commission for irregular workers with branches in [all Egyptian] provinces. This includes the labor force that is not covered by the labor law and has no employer or contracts.”

Egypt’s Labor Code No. 12 of 2003 does not include any provision protecting irregular workers. Article 1 defines the term “worker” as “any natural person working in return for a wage with and under the management or supervision of the employer.” This means that all self-employed workers who are not subordinated to an employer are not governed by the law.

Following Sisi's call on Feb. 8, the presidency issued a statement the same day announcing that Sisi’s proposed insurance plan would include individuals ages 18 to 59, with no requirement for a medical examination.

This presidential interest in irregular workers has raised a number of questions, most especially in the context of the upcoming presidential elections scheduled for March. Is the president seeking to win the votes of a group that has been marginalized over recent decades and paid a heavy price for the government's economic reforms? Such questions are all the more relevant as observers believe that the poorer classes contributed significantly to the decline in Sisi’s popularity.

Shaaban Khalifa, the head of the General Union of Private Sector Workers and Unorganized Workers, told Al-Monitor, “President Sisi's initiative to support irregular workers could achieve social justice among the classes, as stipulated in the constitution. This is a class that no Egyptian president has showed concern for over recent decades.”

Article 17 of the constitution states: “The state provides social security services. All citizens who have no access to the social security system have the right to social security to ensure a decent life, if they are unable to support themselves and their families in the event of incapacity to work, old age or unemployment. The state works to provide appropriate pensions to small farmers, agricultural workers, hunters and informal labor in accordance with the law. Insurance and pension funds are private and enjoy all forms of protection afforded to public funds. Together with their returns, they are a right of their beneficiaries. They shall be invested in a safe manner and managed by an independent entity, in accordance with the law. The state guarantees funds for insurance and pensions.”

Khalifa added, “The inclusion of irregular workers under the umbrella of social protection is very important, because these workers are exposed to a number of risks in the course of their work and subject to expulsion and dismissal. In cases of disability, they do not receive any pension or support subsidies, so there must be a strong system of legislation that ensures their protection. These workers have suffered more than any others as a result of the economic reform program and subsequent price hike. Their protection is therefore a matter of national security.”

Abdul Aziz Abbas, a plumber, said, “I am 48 years old and I have been a plumber for more than 30 years now. I have never received any kind of support from the government, I have no employer, nor do I abide by any working hours schedule. Sometimes I find myself with nothing to do, and I am swamped at others. I fear getting sick and not being able to work, because at that moment I will neither find support, nor be paid or compensated.”

Commenting on Sisi’s initiative, he said, “Such an initiative is good and it points to his care for the poor. I will vote for him in the election. He is the only president who has cared about irregular workers.”

Khadija, a 34-year-old tailor, perceived that if it turned out to be a success and the government enacted the regulating laws and contained this social class, the initiative will increase the president’s popularity and have him win the election big time. Khadija, however, believes that the initiative serves as propaganda and will not be implemented. She said, “We have heard them saying a lot, but doing nothing.” This is true particularly since the enactment of such laws requires more than a month.

According to Ahmed Darraj, a professor of political science at Cairo University, the timing of the president's announcement to ensure the rights of irregular workers has political connotations — especially as the electoral campaigning period approaches, prompting the president to play “his card” as the first defender of the poor in Egypt.

On Feb. 24, the National Electoral Commission announced the beginning of the electoral campaigning period for presidential candidates, which will last for 28 days.

Darraj said, “In my estimation, Sisi’s popularity fell notably after its height when he took office due to the economic reform program and the floating of the pound exchange rate on Nov. 3, 2016. This led to a significant wave of price increases that the poor simply could not afford.”

On July 10, 2017, the Central Agency for Public Mobilization and Statistics announced a 31% rise in the inflation rate after the liberalization of the exchange rate, alongside a 41% increase in food and beverage prices, as compared to 2016 prior to the liberalization decision.

Darraj concluded, “For these reasons, the president is attempting to win the votes of this class, which is, of course, the largest voting bloc in the elections. In my view, if the president succeeds in gaining the trust of these people and carries out his initiative — though I doubt it — no one will be able to remove him from power. This is a group that is able to overthrow any president or maintain him in power for many decades.”