Controversy continues to swirl around the Grand Ethiopian Renaissance Dam, with conflicting reports emerging about how soon Ethiopia will begin storing water there. 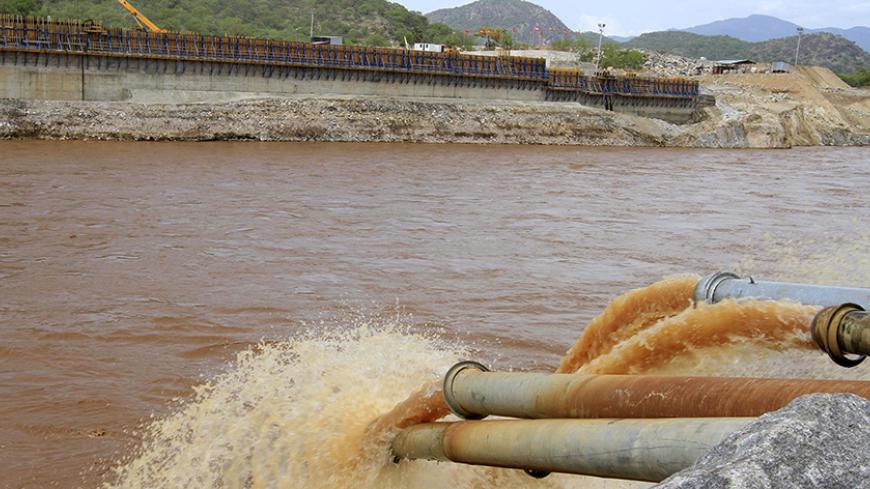 Water gushes out from pipes at the construction site of Ethiopia's Great Renaissance Dam in Guba Woreda, June 28, 2013. - REUTERS/Tiksa Neger

CAIRO — Egyptians are worried about uncertainties surrounding Ethiopia's schedule for storing Nile water behind the walls of the Grand Ethiopian Renaissance Dam.

The latest satellite photos show Ethiopia is preparing for storage, especially since the country pumped water into two turbines to generate electricity, according to Alaa el-Nahry, vice president of the UN-affiliated Regional Center for Space Studies and Egypt’s representative to the Committee on the Peaceful Uses of Outer Space.

In December, Nahry said he expects Addis Ababa to actually start storing water in the reservoir in June.

Meanwhile, the Egyptian Ministry of Water Resources and Irrigation disputed Nahry’s statements. Minister Hossam Moghazy said Jan. 31 that no water is being stored behind the dam, and won't be until the current technical studies between Egypt, Ethiopia and Sudan are completed.

Moghazy’s statements spread doubt among water experts and former officials at the Egyptian government, according to Nader Noureddine, a water and irrigation expert in the faculty of agriculture at Cairo University. He told Al-Monitor that Addis Ababa will start generating electricity in October, which contradicts the minister’s statements that water storage is suspended until the studies are completed.

The National Tripartite Committee, which was formed in August 2014 and includes Egypt, Sudan and Ethiopia, has yet to sign contracts with the consulting firms in charge of conducting two studies on the hydraulic, social, environmental and economic impacts of the dam on Egypt and Sudan. Officials expect the studies to be conducted within eight to 15 months.

Haitham Awad, head of the Hydraulic and Irrigation Department at Alexandria University, told Al-Monitor that as of Jan. 29, Ethiopia had not started storing water yet. He based his statements on satellite photos. However, he said Ethiopia is getting ready to start trial operations of the dam, and he expects water storage to begin soon.

So far, Nahry told Al-Monitor, the storage being undertaken by the Ethiopians is not in the main reservoir lake behind the dam; rather, it’s in on the sides of the Blue Nile to ensure that water flows atop the turbines that recently began operation.

“This step led to the increase in the breadth of the Nile behind the dam,” he said, noting that the current storage capacity volume is not major as it does not exceed half a million cubic meters, since Blue Nile water is currently depleted.

In light of the conflicting data, Al-Monitor spoke with Alaa Yass, adviser to the Egyptian irrigation minister on dams and Nile Basin affairs and a member of the technical committee on the dam. He said, “Believe us, there is no water storage behind the dam for now.”

Yass further talked about the Declaration of Principles signed by Egypt, Sudan and Ethiopia in March 2015. The declaration included agreements on annual operation of the dam and the mechanisms for the first filling. According to Yass, the declaration calls for Ethiopia to refrain from storing water behind the dam before the studies are completed.

He added, “The three countries are keen on nonviolation of the Declaration of Principles’ recommendations.”

However, former Minister of Water Resources and Irrigation Mohamed Nasr Allam commented on the ministry officials’ assertions that no water will be stored before the studies are completed. "This is not logical," he told Al-Monitor.

It will be difficult to finalize the studies when disputes emerge about each step the Tripartite Committee tries to take, all while work is ongoing to get the dam ready to operate, he said.

“Even if the studies on the effects of the Renaissance Dam on Egypt are completed, it will be difficult to agree on the results," he noted. “According to the Declaration of Principles, the dam does not affect the fair and appropriate use of water by the three countries. The declaration, however, did not determine what quantity is considered fair and appropriate.”

The declaration does say that water from the Blue Nile, where the dam is located, will not be used. So, once the studies are completed, negotiations will need to begin on fair and appropriate use of water from the main Nile River — which is shared by all the countries of the river’s basin in the equatorial and Ethiopian plateau, as well as the downstream countries, Egypt and Sudan. With all of the Nile Basin countries participating in the negotiations, the issue will be further complicated.

Allam said the only framework to discuss the distribution of the shares in the Nile Basin is the Entebbe Agreement ratified in May 2010, which both Egypt and Sudan rejected. This means the crisis is more serious than it looks.

At first glance, the disputes about the dam seem to be mere technical disagreements among experts of the three concerned countries about the amount of damage the dam might have on Egypt and Sudan. But in reality, the inherent political conflicts among the three countries keep rearing their heads during negotiations.

Disputes about the water shares emerged during the meeting of the Tripartite Committee held in Khartoum in early February. During the meeting, Egypt refused to give border maps to the French companies working on the studies. The maps show the borders between Egypt and Sudan that indicate the location of the disputed Halayeb-Shalateen Triangle inside the Sudanese borders. The meeting ended with Egypt demanding that the studies refer only to topographic maps, not on the maps showing the demarcation lines.