Virtual party beats Netanyahu, but what about reality?

A Haaretz poll suggests that a party headed by two politicians and a former IDF chief of staff could defeat a party list headed by Benjamin Netanyahu. 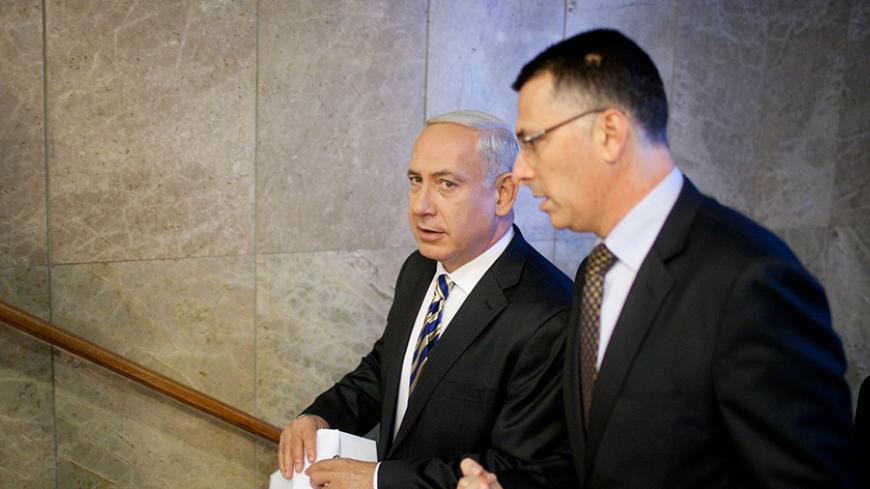 Judging by what people are saying in the Likud Party’s dozens of internal WhatsApp groups, one year into the first term of Prime Minister Benjamin Netanyahu’s government, his status is sound. Despite the intifada by individuals, the ongoing deterioration of personal security and a housing crisis that defies resolution, Likud members believe that Netanyahu is the only person who can keep the party in power for another term.

Nevertheless, on March 24 the Israeli daily Haaretz presented a potential political scenario that could reshuffle the deck by shifting Likud voters to a new party. The Haaretz article hypothesized about a party headed by former Israel Defense Forces Chief of Staff Gabi Ashkenazi, current Finance Minister Moshe Kahlon and former Minister Gideon Saar of Likud. The poll assessed the strength of this virtual party and found that if elections were held today, it would win 23 seats, whereas Likud would win only 22. The new party would be able to block Netanyahu from forming a government.

The poll and the headlines accompanying it have created quite a buzz, especially among the media and politicians. Meanwhile, Likud activists were not terribly upset. What was interesting about the poll was not the rising power of a soft right imaginary party, but the effort to cobble together a political leadership that in reality could never pose an alternative to Netanyahu. In this particular instance, there is no possibility for such a scenario to unfold although the three men mentioned are on friendly terms. Furthermore, the need to invent a party leadership that can face off against Netanyahu only underscores the current reality: There is no real alternative to Netanyahu in his party or outside of it.

What highlights the leadership vacuum even more is that the virtual party being presented as potentially able to take down Netanyahu has three heads, not one. Parties have a leader, and instead of a single figure who stands out and sweeps crowds along with him, there is a group of potentially talented individuals at the head of the imaginary party. This reflects the sad reality that there is no significant alternative to Netanyahu as prime minister, at least at present. Parties always need a singular leader who could take them through elections.

That none of the three men is at the top of the Haaretz poll shows that not one of them has the leadership skills to draw the public toward him. Ashkenazi may be popular, but he remains worn down by the Harpaz affair and has shown no real eagerness to dive into politics. Kahlon is already in over his head in his effort to show achievements as finance minister. He is also trapped in Netanyahu’s narrow government, with his party, Kulanu, eking out seven seats in polls. Saar has exited political life, but continues to frequently attack Netanyahu from the sidelines. This behavior has earned him considerable criticism within Likud as being uncollegial. Apart from that, the March 2015 elections showed that Likud members are extremely concerned about holding on to power, so a rival party with the sole purpose of taking down Netanyahu’s Likud government will encounter serious barriers at the moment of truth.

An excellent example of this is from the last election, when Netanyahu managed to bring back voters who had switched to Kulanu and HaBayit HaYehudi by pointing to the threat posed to Likud's continued rule. Kahlon experienced this fully, especially in the days leading up to the election. Thus, even if he is currently basking in the results of the Haaretz poll, he is well aware that if push comes to shove, the fight for Likud votes would be brutal.

The only person doing the right thing and who could potentially break through and face off against Netanyahu as an alternative is Yair Lapid, the chair of Yesh Atid. He has been rising steadily in the polls since the last election, and his party is thought capable of winning 20 seats. Lapid is active on all fronts in his effort to win over voters from the soft right. It isn’t happening yet, but he is still a player with what the public perceives as a stable and active party.

Despite the structural weakness at the root of Haaretz’s political scenario, the underlying thesis is correct. To replace the current government, seats aligned with the right-wing bloc must shift to a center-right party. That was why the alternative developed consisted of two right-wing politicians and someone with a defense background. It is also why Lapid is working on bolstering the right-wing elements of his party and its rhetoric. None of this is good news for the Labor Party or its leader, Isaac Herzog, who also realizes that he must attract right-wing voters, although he doesn’t really know how to accomplish it.

As far as Netanyahu is concerned, this month marks his seventh consecutive year in power, and he is still the strongest leadership brand in the arena. This is actually quite amazing, considering that in all those years, no political alternative to challenge him or siphon off votes from the soft right has emerged from within the political system or outside of it. Netanyahu politically eliminated all his rivals in Likud to become the party’s sole leader. This could change, of course. But under the current, real (rather than virtual) circumstances, even if the public is fed up with Netanyahu and wants change, there is no one on the political playing field who can motivate the public to follow.