Both the Israeli and the Palestinian side tend to favor unilateral steps instead of negotiating a compromise that the parties have been avoiding for years. 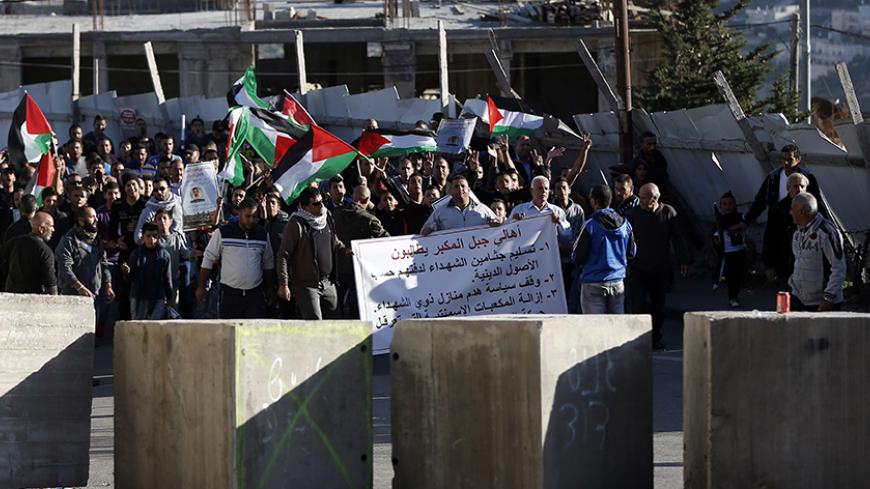 Residents of the East Jerusalem neighborhood of Jabal Mukaber shout slogans and wave their national flag during a demonstration, Nov. 13, 2015. - AHMAD GHARABLI/AFP/Getty Images

The Palestinian leadership is concerned with Israeli discourse, both by the government and the opposition, about future unilateral steps by Israel. On the one hand, it refers to Prime Minister Benjamin Netanyahu's statement Feb. 9 about building a fence on Israel’s borders, including along the Jordan River, to defend Israel against the infiltration of “wild beasts.” On the other hand, it refers to Zionist Camp leader Isaac Herzog’s proposal for a unilateral disengagement from East Jerusalem neighborhoods.

A senior official in the direct entourage of President Mahmoud Abbas told Al-Monitor, on the condition of anonymity, that the leadership in Ramallah rejects all of Israel’s unilateral acts and proposals. “There are currently on the table some Israeli unilateral acts motivated by devastating intentions and others with better intentions. But both are dangerous and bound to fail,” he said.

The official spoke at length about the failure of the Gaza disengagement in the summer of 2005. He claimed that the late Prime Minister Ariel Sharon should have concluded an agreement with Abbas on the withdrawal from Gaza prior to acting. The unilateral disengagement actually strengthened the position of Hamas. It helped bring it to power in Gaza in 2007, given the security turmoil that was left behind. The official said, with great anger, that Netanyahu’s policies and actions are all unilateral, “The prime minister’s policy is very clear to us — to unilaterally prevent us from establishing a state.” He recited a long list of unilateral acts by the Netanyahu government and by the Israeli army, including settlement expansion, land appropriation, demolition of houses, Israeli economic development of settlements' industrial zones in West Bank Area C (under Israeli control), the army entering Palestinian cities in Area A (under Palestinian control) and expanding Israeli control in East Jerusalem, etc. The official added that Netanyahu’s policies can be summed up as a de facto gradual annexation of the West Bank to Israel.

At the same time, the official also criticized opposition leader Herzog’s new plan on unilateral disengagement from East Jerusalem neighborhoods and villages. He was especially frustrated with Herzog blaming Abbas for the lack of a two-state solution process. “Israel will not find a more moderate leader than Abbas. Herzog should learn from one of his predecessors, [the late Prime Minister] Yitzhak Rabin, that Israel can create a partnership with the pragmatic Fatah leadership,” he noted. The source criticized the idea of isolating Jerusalem’s Old City and the Al-Aqsa Mosque from the rest of East Jerusalem, stating, “We would fight such a proposition if it were made by an acting prime minister.”

The official concluded with a note of bitter criticism, “Apparently, Israel is not able to make agreements based on compromises — agreements which can be reached only out of a position of equality between the negotiating sides. Due to the occupation, Israelis from right and left suffer from a superiority complex.”

The Palestinian official said that the Palestinian Authority would be open to an agreement with Israel, orchestrated by the international community, in which both sides would refrain from unilateral acts and agree to join an international peace conference leading to a two-state solution. The Israeli side would refrain from any unilateral policies, including the expansion of settlements and security measures that contradict the existing agreements between the parties. The Palestinian side would, in return, refrain from any unilateral diplomatic acts, including at the UN and at the International Criminal Court in The Hague. It would also halt any encouragement of violence and enhance security and anti-terror cooperation with Israel. In parallel, the two sides would have to agree to take part in an international conference convened by the Quartet and based on the Arab Peace Initiative of 2002, taking Israel’s security interests into consideration.

According to the official, these are policy ideas that are explored at very high levels, but not yet formed into policy initiatives. They are intended to counter Israel’s unilateral moves, as well as Palestinians who seek an immediate armed intifada.

Al-Monitor asked a close confidant of Prime Minister Netanyahu about these Palestinian ideas. He rejected them outright, saying that they constitute an alibi as to why not to negotiate with Israel bilaterally and unconditionally.

Given the total mistrust between the two parties, one can predict that in the foreseeable future, unilateralism from both sides will be the law of the land.