How one Kurdish woman went from child soldier to Swedish lawmaker

Swedish parliamentarian Amineh Kakabaveh tells Al-Monitor about her remarkable journey from Kurdish guerrilla camps in Iraq’s mountains to the rostrum of European politics. 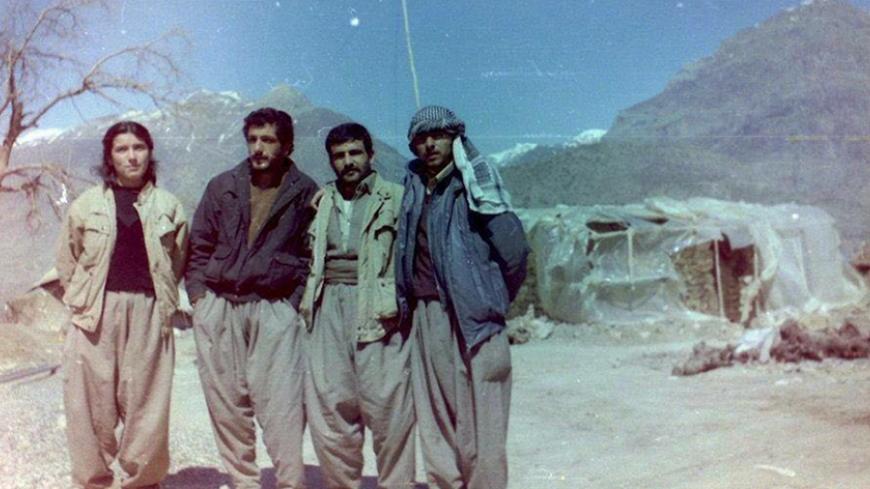 Swedish member of parliament Amineh Kakabaveh (L) stands with other members of the Revolutionary Society of Iranian Kurdistan's Toilers, or Komala, in a camp in the Iraqi mountains, in the late 1980s. - Amineh Kakabaveh

DIYARBAKIR, Turkey — In pitch dark one night in 1991, some 50 people marched from Kurdish-controlled northern Iraq toward the Turkish border, unarmed and clad in traditional local attire. As they approached the frontier, a Turkish reconnaissance helicopter began to hover in the area, complicating their plan to sneak into Turkey. Only one woman marched among the men — 19-year-old Amineh Kakabaveh. She kept calm despite the building tension. Evading the helicopter and the border guards, the travelers managed to reach the Turkish border town of Silopi around midnight. The young Kakabaveh could have hardly imagined she was on a journey to a bright political career in Europe.

An Iranian Kurd, Kakabaveh belonged to the Revolutionary Society of Iranian Kurdistan's Toilers, better known as Komala. She had joined its armed wing as a child to become a peshmerga, or a Kurdish guerrilla fighter.

A member of the Swedish parliament today, Kakabaveh was in Diyarbakir last week to observe firsthand developments in Turkey’s ongoing crackdown on urban Kurdish militants. In an interview with Al-Monitor, she shared her remarkable life story, which began in an impoverished Iranian Kurdish family 44 years ago.

Born in Saqqez, western Iran, Kakabaveh was one of eight children. To help her parents make ends meet, she began working at an early age, selling handmade items or toiling at the farms of wealthy families. As several people around her joined Komala, the young Kakabaveh became interested in politics.

“For the first time in Iran, Komala was recruiting female peshmergas. For me, this was utopia. Women fighting for freedom was like a dream since women in our region were simply married off and had children. That’s why I got interested in Komala,” Kakabaveh told Al-Monitor.

Defying her parents, the 13-year-old Kakabaveh joined the group and became a peshmerga. She left Iran for the Komala camps in the mountains of neighboring Iraq, where, deprived from schooling until then, she learned to read and write in Kurdish and Persian. She also received military training as the Iran-Iraq War raged on. In March 1988, in the closing days of the war, Saddam Hussein’s regime dropped chemical gas bombs on Halabja, a Kurdish town near the Iranian border. Soon, the Komala camp near Ranya also came under a chemical attack, which claimed the lives of 37 group members. Kakabaveh, who was in a nearby area at the time, rushed to help her comrades but was injured from the poison gas herself. She lost 72 other comrades in a second chemical attack that struck Komala members in the Sirvan region. During her six years with Komala, Kakabaveh had many brushes with death, as she was caught up in numerous air and ground attacks as well as clashes between rival Kurdish groups.

As the Kurds took control of northern Iraq, Iran began interfering in the region. Kakabaveh and her comrades had to leave. Their destination this time was Turkey.

Recounting her departure from Iraq, Kakabaveh said, “After Saddam withdrew from the Kurdish region, an intensive Iranian meddling began. They sent hired hitmen to assassinate or poison our comrades. We lost a lot of comrades in those days. There were also internal problems within Komala. I was among 500 people who decided to quit the organization and cross to Turkey.”

After their perilous march across the border to Silopi, Kakabaveh and her comrades boarded a bus to Ankara, a trip that opened her eyes to the extent of oppression Turkey’s own Kurds faced in those years. “We had neither passports nor ID cards. The police stopped us on the way. I told them my family was of Azeri origin. They got very angry when I said my family lived in [Iranian] Kurdistan,” Kakabaveh recalled. “I didn’t know at the time they [the Turkish authorities] were so sensitive to the word ‘Kurd.’ Saddam’s regime and Iran were dictatorships, but even they did not mind the word ‘Kurd.’ This was something new for me.”

In Ankara, the group went to the United Nations office, seeking international asylum. “We told the UN we were peshmergas and explained to them what we went through with Saddam and Iran. Three months later, we received a refugee status, along with ID cards and financial aid,” Kakabaveh said. “We rented a home. The Turks were very helpful once they knew we were refugees. … We lived together, 50 people in one house. We lived in Ankara, Kayseri and Kirsehir, and everywhere we went we were treated very well.”

After an 11-month stay in Turkey, the door to a new life opened for Kakabaveh when a Swedish delegation arrived to take 500 refugees. In Sweden, the once illiterate Kakabaveh studied social sciences and philosophy and even got a post-graduate degree. Komala was now a thing of the past, but Kakabaveh’s political activism continued. She joined the socialist and feminist Left Party and worked at the Stockholm municipality and radio station called Woman’s Voice. The field of women’s rights was her special focus. In 2008, she assumed her first parliamentary seat, replacing a colleague who had to quit for health reasons. She retained her seat in the 2010 and 2014 elections.

The bloody clashes in Turkey’s mainly Kurdish southeast are also on Kakabaveh’s radar these days. She said she had recently submitted two parliamentary questions to the Swedish government on the issue. In the first one, she asked what Sweden was doing to press Ankara and the Kurdistan Workers Party (PKK) to return to the negotiating table. The second one inquired what Sweden was doing to get the PKK off the European Union’s list of terrorist organizations, given that the terrorist label constituted a stumbling block for negotiations.

Back in Sweden, Kakabaveh has plans to meet with the parliament’s EU affairs commission and argue that European countries should issue warnings to Turkey regarding the Kurdish problem before granting it money as part of efforts to stem the refugee wave to Europe.