The rescue of a 7-year-old Yazidi captive in Ankara raises questions about how hard Turkey is trying to tackle Islamic State militants in the country. 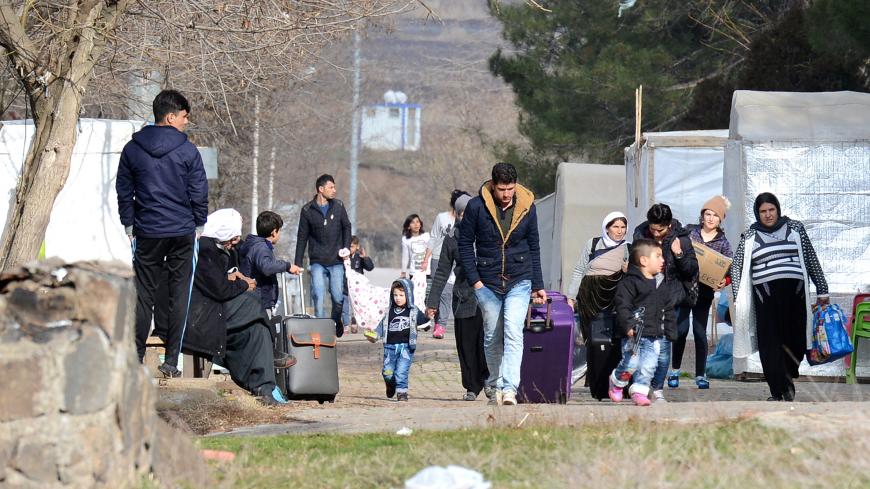 Yazidis refugees carry their belongings on Jan. 3, 2017, in Diyarbakir, southeastern Turkey, as they change their refugee camp and move to Midyat, farther south. - ILYAS AKENGIN/AFP via Getty Images

Six years after its gruesome assault on the Yazidi minority in Iraq, the Islamic State (IS) continues to sell Yazidi captives online on what is known as the “deep web” of criminal activities. A number of such sales have taken place in Turkey, indicating that IS militants are still able to take shelter in the country.

Most recently, a 7-year-old Yazidi girl was rescued by police posing as buyers. According to Turkish journalist Hale Gonultas, who closely follows the fate of IS captives, police took action after an advertisement in Kurdish and Arabic, complete with the girl’s picture, appeared online Feb. 23. Posing as relatives of the child, the police made the highest bid and were able to detect the address of the advertiser. They raided a home in Ankara’s Kecioren district the following day and rescued the girl.

According to the official account of the incident, police and intelligence services established that a suspect, who was a ranking member of IS in Mosul, Iraq, had made it to Ankara, bringing along a Yazidi child as “war booty.” The man, identified only as S.O., was detained along with a suspected accomplice.

After such online “auctions,” the captives are usually delivered via “safe middlemen” who are typically criminals involved in the trafficking of drugs, arms and humans. The rescued girl remains in state care in Ankara, as Iraqi commissions dealing with missing Yazidis are working to trace her family.

In July 2020, a 24-year-old Yazidi woman, held captive in Ankara’s Sincan district, was rescued by relatives in Australia who “bought” her in an online sale. According to Gonultas, the Yazidi woman's captor — a Turkmen IS member from Mosul — had bought her from an online slave market in 2018. The man, who moved frequently between Iraq and Turkey, kept a home in Sincan with his two wives, four children and the Yazidi woman.

Another Yazidi woman was rescued in Ankara in October 2019. She was held by a senior Iraqi Turkmen member of IS, who was so audacious as to rent an apartment near a police station in Kecioren. The young woman, abducted as a 14-year-old in 2014, lived with the family of the IS militant and had a baby as a product of rape. The man, who had been an IS emir in Tal Afar, Iraq, traveled frequently to Iraq, which allowed the woman’s brother to track him down to Ankara. The brother managed to take a picture of his sister and her captor, seizing a rare moment the man took the woman out, and went to the police. Eventually, the woman was rescued. The authorities, however, took no legal action against her captor as she did not file a complaint against him, although they had enough findings to pursue a criminal case for abduction and rape.

Another rescue saga unfolded in Kirsehir, a city not far from Ankara, in 2017, when an Iraqi Turkmen made an unsuccessful attempt to register two children as his own at a police bureau dealing with refugees. The two siblings were taken into state care, while their pictures were sent to Iraqi centers dealing with missing Yazidis. This eventually brought their adult sister to Kirsehir — a woman who herself had been an IS captive before relatives bailed her out. Her parents, husband, son and a sibling were also missing. The woman faced legal barriers in claiming her siblings in Kirsehir, including having to provide DNA tests and proof that their parents were dead. Ultimately, the two children, ages 9 and 11, were handed over to Iraqi Kurdistan President Nechirvan Barzani when he visited Ankara in September.

The Turkish police’s press bulletins paint a relentless struggle against IS, with dozens of suspects rounded up on a monthly basis. Yet those efforts have failed to prevent IS militants from taking shelter, transferring money and selling people in Turkey. The bitter reality is that the IS presence in Turkey is much more entrenched than meets the eye. The police target mostly foreign members of the group, while locals remain untouched unless they stick their necks out or become the subject of complaints.

Turkish nationals from various parts of the country had heeded IS’ call to Muslims to join its self-styled caliphate in Syria and Iraq. Those who returned home became the helpers of Iraqi and Syrian members who sought refuge after the “caliphate” began to crumble.

IS members found a convenient habitat in Ankara and Kirsehir, according to two sources knowledgeable of the issue. About 200 Iraqi nationals, all Turkmen from Tal Afar, made it to Kirsehir in 2016, when IS began to disintegrate. More of them, including the IS deputy emir of Tal Afar, came in ensuing years.

Kirsehir had its own recruits. A former member of a Turkish militant Islamist group lured locals to IS, including his own son. In 2015, however, he reported his own daughter and grandchildren to the police to stop them from going to Syria, laying the ground for the first court case against IS in the city. His son and six other Kirsehir natives were killed in Syria in 2016. Yasar Kocadan, another recruiter in the area, was sentenced to seven years in 2018 following complaints by recruits’ families.

Anti-IS operations in Kirsehir resulted in the detention of 12 suspects in 2017, seven in 2018, 16 in 2019 and 57 in 2020. Seven alleged relatives of IS leader Abu Bakr al-Baghdadi were among the predominantly Iraqi suspects. One of them was imprisoned, pending trial, in February 2020, while the other six were sent to the deportation authorities.

In Ankara, a group of shopkeepers financed recruitments in the district of Sincan, known as one of the capital’s Islamist strongholds. Abdulkadir Ercan, a former al-Qaeda suspect, stood out in the recruitment effort. He had been detained in a 2011 police raid on a house full of explosive materials, but was released six months later, along with 13 other suspects. Ercan arranged for scores of jobless or struggling young men to go to Syria, including 21 relatives. Later, foreign IS members would take refuge in Sincan, including widows of slain militants who received financial support through the local networks of IS.

Kecioren was another Ankara district that came under the spotlight. Its outlying slums were teeming with Syrian refugees, which made it easier for IS to gain a foothold for recruitment. The promise of economic benefits also lured young people of unlikely profiles such as boozers, drug abusers and nightclub bouncers. The neighborhood of Hacibayram was also a major recruitment ground.

Gonultas told Al-Monitor that impoverished neighborhoods rife with drug-peddling and arms-trafficking were the main IS recruitment grounds in Ankara and that the recruits were drawn mainly by “the promise of lots of money and lots of women.” She singled out Oguzhan Gozlemecioglu as a leading figure, noting he had no Islamist background but would “change ideologically” to become an emir in Raqqa. “He was killed, while his brother Halil Ibrahim was captured by [Kurdish forces]. Their father served six months in jail for recruitment for IS,” she said.

“Buses were running from Sincan to Raqqa in 2016 and 2017. People would even go [to Syria] to see their children,” she recounted. A clan known as “the Tatlibal group,” which was involved in the recruitment of fighters, has erected an apartment block in Ankara that houses mostly Syrian and Afghan tenants, Gonultas said. “People who have been with IS are residing there as well,” she said.

Atilla Kart, a former legislator for the main opposition Republican People’s Party who closely followed IS recruitments at the time, puts the blame on the government. According to him, the inadequate efforts against IS have to do with the climate the government has created and the institutional erosion in the country.

Kart told Al-Monitor that police had grown reluctant to take on Islamist groups unless they receive explicit orders from Ankara. He recalled an incident in 2015, when a family, trying to trace a son who had joined IS, failed to set the police into action even after providing the address of a cell house in Gaziantep near the Syrian border. Kart contacted a local police chief to help the family. “He told me, ‘You are right. The parents want us to raid the place but we cannot do so without instructions from Ankara.’ All the information was there — how many people stayed in the house and from which provinces they had come. So, that is how Turkey came to the current point,” Kart said.

IS militants in Turkey continue also to transfer money through jewelers and exchange offices, using the “hawala” method. The detentions are just the tip of the iceberg, with the IS network much larger than it is generally imagined.