Taking advantage of the Turkish judicial system and the political climate besieging it, Islamic State suspects often receive sentence reductions under repentance provisions, even if they feign regret. 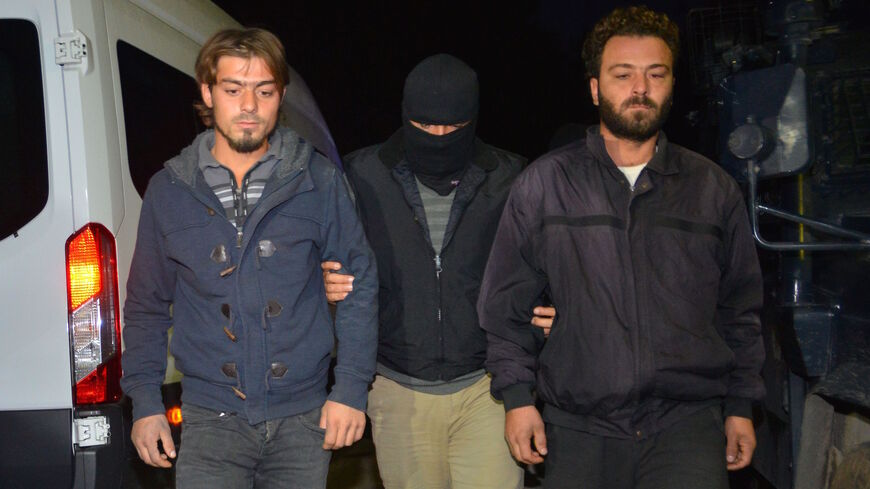 Back in February, Turkish police posing as buyers rescued a 7-year-old Yazidi girl — one of the many Yazidi victims the Islamic State (IS) abducted and enslaved — after her captives advertised her for sale on what is known as the “deep web” of criminal activities. Less than half a year on, the three Iraqi suspects nabbed in the operation in Ankara have all walked free.

That IS militants could easily find safe harbor in Turkey is not a secret, but the fact that suspects supposed to stand trial for grave crimes such as abduction, enslavement and maltreatment could walk free under judicial control is not merely a legal scandal but a sign that the suspects are shown leniency and favor. Moreover, the trials of IS suspects in Turkey show the penal code’s Article 221 on “effective remorse” — designed to encourage confessions about terrorist groups in return for sentence reductions — is becoming a means for suspects to evade due punishment.

The police raid in which the Yazidi girl was rescued led to the detention of Sabah Ali Hussein Oruc, who, according to the initial official account of the raid, was a ranking IS member in Mosul and had brought the girl along from Iraq, as well as two other Iraqis identified as Anas V. and Nasser H.R. Turkish journalist Hale Gonultas, who closely follows the fate of IS captives, detailed last week how Anas and Nasser were released under judicial control within several days after being questioned by prosecutors, while Sabah was put behind bars pending trial. The March 8 indictment charged all three suspects with membership in and leadership of a terrorist group.

According to the indictment, Sabah was subordinate to an IS emir named Abu Abdullah, served as a guard at IS positions in Iraq, took part in armed clashes and was on the IS payroll. He claims it was his brother who bought the Yazidi girl before being killed in Iraq. Sabah allegedly made it to Turkey with a fake passport in 2017 after a six-month stint behind bars in Iraq. By that time, he claims, he had already sent the Yazidi girl to Turkey along with his wife and children.

In the first hearing in the case June 10, the court released Sabah pending trial after he provided the names of IS leaders in Iraq and Syria in a bid to benefit from remorse reductions.

According to the indictment, the two other defendants were subordinate to Jabbar Salman Ali Farhan al-Issawi, a senior associate of slain IS leader Abu Bakr al-Baghdadi, and ran an IS body in charge of captives in Fallujah.

The Yazidi girl remains in state care in Ankara, with the authorities still trying to track down her family. Azad Baris, head of the Germany-based Yazidi Culture Foundation, told Al-Monitor the girl’s mother might be among other missing Yazidi women who, the group believes, continue to be held captive in Turkey by IS militants. The foundation’s request to become an intervening party in the case has been rejected, Baris said, dismissing court cases against IS suspects in Turkey as “token” trials.

A source knowledgeable of the case told Al-Monitor on condition of anonymity the court had yet to decide on the defendants’ request for remorse reductions and their conditional release owed mainly to insufficient evidence. According to the source, the case has failed to lay out the defendants’ role regarding the abduction and sale of the girl, even though that was the offense that led to their detention. With the case limited to the offense of membership in a terrorist group, the suspects stand a chance to benefit from the remorse clause.

The provision requires members of criminal groups to show regret and provide information that could help dissolve their groups. Under the article, those who surrender voluntarily and make such confessions are exempt from punishment for setting up, leading or belonging to criminal groups. For those who provide such information after being caught, the article stipulates sentence reductions by up to three quarters.

A series of court cases against IS suspects paints a striking picture of how the remorse provision plays out.

In June, for instance, an IS suspect charged with membership in a terrorist organization was sentenced to seven and a half years in jail in the southern city of Adana, but his sentence was reduced to 22 and a half months under the remorse clause and then suspended, meaning no restrictions were left on the convict. In the case of suspended sentences, convictions are not even registered in one’s criminal record.

In two other trials in Adana in March and April, the remorse provision resulted in jail sentences of 37 and a half months and 33 months respectively for two suspects charged with membership in IS.

In December, a man identified as M.S.E. and accused of being the IS emir in Mosul’s Muhallabiya district was sentenced to five years in jail in Kayseri after providing the names of 33 fellow militants. In such cases, convicts could even walk free under Turkish law if they had spent at least about three years behind bars before and during the trial.

In April 2019, Abdulkadir Polat, a Turkish national who faced up to 15 years in jail on charges of being the local IS leader in Turkey’s northwestern province of Kocaeli, got only 37 and a half months after remorse reductions and was then released on parole. In another IS-related case in Kocaeli involving 49 defendants, the court released the last four suspects who remained behind bars in December.

Two women who had been wanted as would-be suicide bombers also walked free in 2019, benefitting from remorse provisions. The government had put bounties on their heads as part of probes that followed the bombing of a peace rally in Ankara in October 2015 that claimed 103 lives.

Ibrahim Tahen, who was an IS commander in Syria and was captured in the northwestern city of Bursa in March 2019, made confessions that helped him receive no more than 37 and a half months in jail. In December that year, six suspects walked free in Duzce, benefitting from the remorse clause.

Mehmet Abitoglu, who was captured in April 2018 and had a bounty on his head, was sentenced to five years and 10 months later that year, benefitting from a one-third reduction for providing information about the group.

In another trial in 2018, a Moroccan national identified as M.O., who had served as an IS court clerk in Raqqa, also benefited from the remorse clause and received a jail sentence of 37 and a half months in Bursa.

In April 2019, three French women who had been wanted on a red Interpol notice were sentenced to 37 and a half months in jail each after their penalties were reduced by half and were eventually released.

Lawyer Onur Guler, who has represented multiple IS suspects, told Al-Monitor the remorse provision is typically applied to suspects who do not face charges of really grave connections, are able to prove they have renounced the IS ideology or can show themselves as such and provide some information about the group. But in some cases, he said, suspects with high-level connections who provide information of limited value receive significant sentence reductions, and some defendants who feign regret are able to evade punishment. Some questions posed to suspects to establish their remorse allow for deception. For instance, they are often asked whether they see the Republic of Turkey as taghut or a transgressor of the edicts of Allah, a question few would answer in the affirmative. While some suspects see repentance as blasphemy, others believe lying is permissible against “the oppression of taghut regimes.”

According to Guler, canny criminals have come to instrumentalize — that is, exploit — the remorse clause. Among those who assert they have renounced the IS ideology and secure release, some do take a new path, but some become even more radicalized. He gave as an example Abdulkadir Polat, who had been involved in media outlets that contributed to IS recruitment. To secure a sentence reduction, he provided a list of about 100 names and told the court he had joined the ruling Justice and Development Party, voted in elections and saw President Recep Tayyip Erdogan as the leader of the believers. Following his release, however, he went back to takfiri propaganda on YouTube and grew as an extremist as to denounce even IS as “infidels.”

Guler said there were cases in which IS suspects who had benefited from remorse reductions faced investigations and trials for new offenses later. “Those who are released or serve up their sentences go through significant transformations. They represent takfiri mutations, and very different figures and groups could emerge in the coming years,” he added.

The lawyer noted that the courts also differed in their attitudes, with some granting only the minimum sentence reductions and others going generously for the upper limit.

Foreign IS suspects prefer to stand trial in Turkey, he said, citing several reasons. “They stand a greater chance of being acquitted or avoiding detention while on trial [in Turkey] than in other countries. They face lower sentences, and prison conditions are relatively better in Turkey. Foreign [IS] members see Turkey as a safe harbor despite everything,” Guler said.

In sum, the Turkish judiciary, which would often hold suspects in lengthy pre-trial detentions without even formally indicting them, has shown to be rather lenient toward IS defendants. Ostensibly, some judicial actors see IS suspects as “misguided Muslims” and tend to reward any signs of remorse they show.