Turkey's ruling Justice and Development Party is glorifying military "martyrdom" in an attempt to steer civilian-military relations into support for the government. 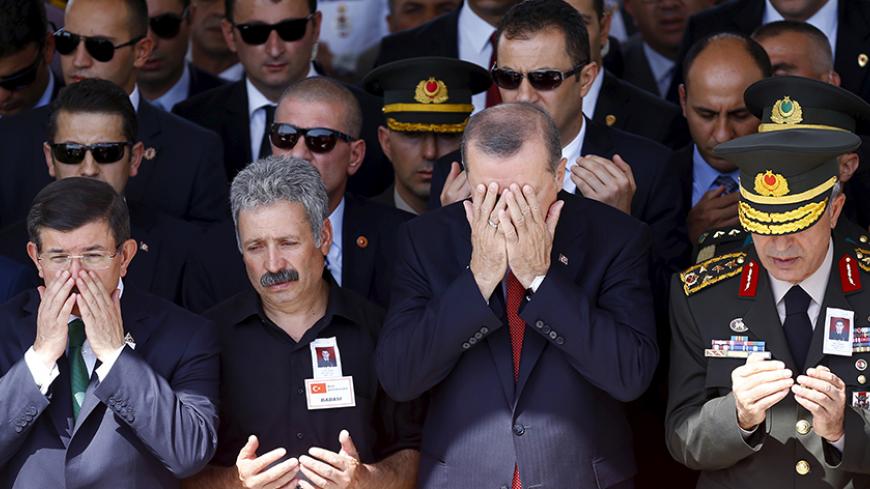 Turkish President Recep Tayyip Erdogan (2nd R), Prime Minister Ahmet Davutoglu (L) and Chief of Staff Gen. Hulusi Akar (R) pray during the funeral of Sgt. Okan Tasan, one of the soldiers killed during an attack on a military convoy in the mountainous Daglica area of Hakkari province, in Ankara, Sept. 10, 2015. - REUTERS/Umit Bektas

Since the Kurdish peace process collapsed in June, the death toll has been steadily mounting. Although there are no official numbers for casualties, on Jan. 21 it was reported that in the last seven months of 2015, Turkey lost 218 military personnel. The number of losses in the first 20 days of 2016 was reported as 24.

It would be no exaggeration to say that almost every day, Turkish TVs broadcast funeral scenes. In most cases, senior Turkish government officials are present. Before the November elections, Turkish President Recep Tayyip Erdogan was criticized for his remarks glorifying martyrdom and using the funeral scenes to his political advantage. Since the elections we still see a heavy presence by senior AKP members at these funerals. In a recent drunk-driving accident, the police officer who was killed was given a martry’s funeral in the presence of a provincial governor, mayor and high-ranking military officers.

In addition, the top brass frequently accompanies the Turkish president and prime minister during their foreign visits. On Jan. 31, the Turkish armed forces' Chief of General Staff Hulusi Akar was photographed in camouflage next to Turkish Prime Minister Ahmet Davutoglu in Saudi Arabia, generating speculation about the intended message of his outfit. Pro-government media outlets frequently publish news and op-eds praising the armed forces as well as the dead. Pages of photos from funerals are common in all the dailies as well. As young conscripts from all over Turkey become casualties or veterans, reports about which city has the most martyrs contribute to the rise of nationalistic fervor.

Considering that the AKP’s rhetoric on military sacrifice has changed significantly over the last couple of years from rather reckless criticism to respectful commemoration, we need to question how the AKP became an ally of the armed forces so rapidly and what this newfound alliance means for the troubled civilian-military relations in Turkey.

The Turkish military has traditionally been seen as a rival to the civilian governments, flexing its muscles with coups every other decade up until the 1980s. Although the AKP’s relations with the military have always been tumultuous because of ideological differences (the military traditionally has been staunchly secular), ties have deteriorated further due to years of complicated trials that significantly tarnished the reputation of the armed forces. Yet, the AKP’s recent conflict with the movement of Fethullah Gulen, the end of the peace process with the Kurds and the Syrian civil war have compelled the armed forces and the government to collaborate. To many, it may seem that the Turkish government and the military have finally found a peaceful equilibrium. This view is common among prominent Kurdish activists, Al-Monitor has learned, though they hold that this balance was reached at the expense of Kurdish rights and liberties.

Although rumors of a possible coup are always popular among certain sectors of society, we must ask if the Turkish military as an institution has internalized a commitment to civilian control, or if we still fear a coup lurking in the background. The recent images and the dialogue between the armed forces and AKP elites signal that the decades of "suits versus uniforms" confrontation are over, at least for now. Also, although neither the AKP nor the military indicates a change in ideological approach, they seem to have reached a tacit agreement that the struggle over secularism is at a draw.

This alliance has clear goals, though its durability remains ambiguous. Al-Monitor spoke with 10 retired and active-duty officers with ranks of colonel or higher about the current state of civilian-military relations. Most of them asked not to be identified. A retired two-star general told Al-Monitor, “Military-civilian relations are similar to two hands on a gun. Civilian authority should decide when to pull the trigger and the target; yet the precision is controlled by the military. Currently, we see that the government came to an agreement it cannot battle the [Kurdish Workers Party] and its offshoots in the southeast without the military. The military also understands it has to prove itself to the Turkish people that it respects civilian control. We do not have to agree on every aspect as long as we agree on the end result of curtailing terrorism.”

An active-duty colonel told Al-Monitor, “We can see the morale of an army from how the society treats its veterans and soldiers. The AKP has tried to destroy the trust in the Turkish armed forces in the eyes of the public, but it has backfired. Because we are an institution representing the people, because the majority of men in this country still remember their days in the military and the brotherhood. So yes, the army learned to respect religious beliefs, and the Turkish Islamists learned that if you treat your veterans and soldiers as victims, rather than proud men, the whole country loses. So if you call your martyrs “a few fallen soldiers,” then you can expect a reaction from the military.” Al-Monitor also asked if the AKP can compensate for past mistakes. All the officers agreed that it could, but that just appearing at funerals would not suffice. They all voiced concern about helping veterans and the families of fallen soldiers when the funerals are over.

The military does not battle terror alone. Recently, it was reported that police forces have started training for urban warfare with the army. Military involvement in domestic affairs can produce mixed results for the government. Retired Col. Erhan Kutay told Al-Monitor, “It took the AKP 13 years to learn that it has to pay sufficient attention to the military point of view when dealing with terrorism. Soldiers understand that urban warfare, with militarization of police or with armed forces, if prolonged, can generate serious unintended consequences for all of us. Hence, soldiers drag their feet on engaging in urban warfare.” With that said, it is the civilian authority that makes these decisions, so that body should be prepared for the consequences.

It is also crucial to question to what extent the armed forces influence Turkish foreign policy. Sources close to the AKP told Al-Monitor that despite all political efforts, the Turkish military has resisted any adventure in Syria. We can see the unwillingness to get involved in the Syrian military conflict beyond NATO guidelines. Here, we must ask if Turkey's military is equipped for involvement in the Syrian civil war.

Another general, who served time in prison before being acquitted of the charges against him, told Al-Monitor, “Looking from a distance, one may see the armed forces as unified force. However, take a look at the commentary on the chief of general staff in social media. You cannot find much praise. What you find is a portrait of a “yes man,” much like his predecessor. So on the surface they provide a happy picture of collaboration with the AKP. However, the current chief of general staff has not spent much time in the combat zones of eastern and southeastern Turkey. What you must ask yourself is whether the younger officers respect him. Can we assume the absence of a coup means healthy civilian-military relations?”

With every image of coffins wrapped in Turkish flags surrounded by mourning mothers, children and spouses, one cannot help but wonder if the men in suits are finally ready to defend those in uniform.