The evolution of Turkish military's role in politics

With the deteriorating situation in Iraq and Syria, the Turkish military is still a force to reckon with for President-elect Recep Tayyip Erdogan’s "New Turkey." 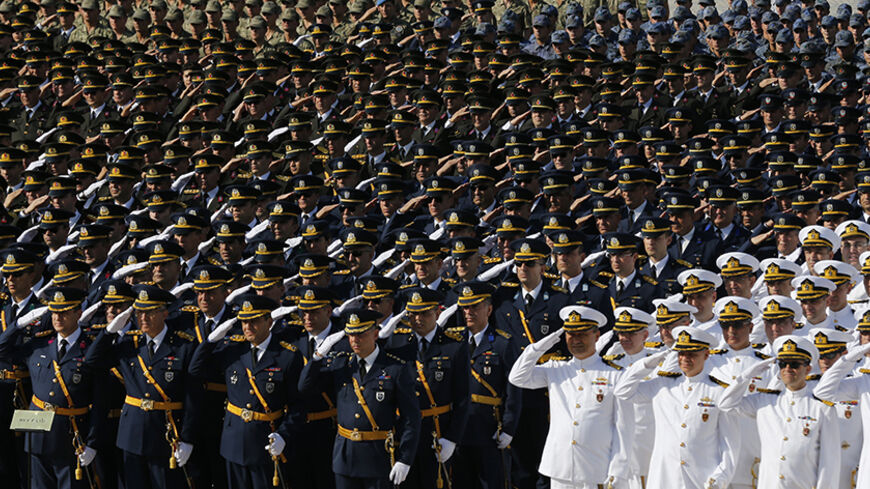 Turkish soldiers salute during a ceremony marking the 91st anniversary of Victory Day at the mausoleum of Mustafa Kemal Ataturk, founder of modern Turkey, in Ankara, Aug. 30, 2013. - REUTERS/Umit Bektas

On Aug. 15, Hizb-ut Tahrir (Party of Liberation, a Sunni organization with Pan-Islamist goals) held an "international media conference" in Beirut. The conference was titled “Gaza … Rather All of Palestine Seeks Victory from Muslim Armies.” At the conference, Mahmut Kar, a Turkish representative of Hizb-ut Tahrir, gave a formidable speech, asking, “Where is the glorious Turkish army? Is it not the best army of the Middle East and eighth-best in the world? We as Hizb-ut Tahrir call upon the Turkish Armed Forces (TAF). For a long time, you have disregarded your religious calling (jihad). You are silent about Gaza. We warn you: Come to the righteous path of jihad in the name of Allah and specifically defend Gaza, and in general liberate the Muslim world from its miseries.”

A young cadet of the Turkish navy watching the video with a gentle smile on his face told Al-Monitor: “Is it not lovely that even marginal Islamist movements in Turkey trust the military?” Kar’s speech did not find any space in mainstream media. A few ultraright marginal Islamist publications reported the conference. Only a decade ago, a call to jihad to TAF by an Islamist organization would have been scrutinized by the media and public, but today it is not even newsworthy. TAF has been out of public sight.

This absence is particularly intriguing, given the turmoil on Turkey's borders. Failed states Iraq and Syria have given rise to multiple armed nonstate entities, particularly with Kurdish and Islamist identities and with different codes of conduct. Turkey has 49 hostages in the hands of the Islamic State (IS) and an unknown number of fighters have traveled through Turkey into Syria and back. Turkey has started to take some steps to alter its notorious "open border policy" as international and local pressures built up. Yet, rarely if ever will you see an active-duty officer making a statement in the news, or a retired officer providing commentary on security on TV shows. This is a stark change since TAF used to provide harsh comments even in matters of less importance, but now they are almost invisible. Most high-ranking officers were resentful of Chief of General Staff Gen. Necdet Ozel for hurting the prestige of the forces. One cadet asked Al-Monitor, “Do militaries need meek or strong superiors in the ranks?”

A more worrisome question that is almost never asked in Ankara circles is, “How much weight does the government give to the advice of soldiers in designing its policies?” — particularly for the southeastern border, where nation-states and their standing armies are withering away while nonstate armed actors take the stage. This is difficult to assess, since Justice and Development Party (AKP) elites rarely make reference to strong communications during their public speeches.

There are reasons for the deliberate ignoring of TAF by the political elite. Turkey has experienced several military coups since the 1960s, and it has become the mission of the AKP to take the military out of politics. After 12 years in power, did the AKP succeed? As one naval cadet told Al-Monitor, “Despite all talk about ‘coup attempts by extremely intriguing lobbies against the AKP,’ there can be no viable overthrow of a government without military power, and as long as you have men — and women — holding guns, there is the shadow of a coup.”

TAF has been shaken by a series of prosecutions — the most notorious were called “Ergenekon” and “Balyoz” (“Sledgehammer”) — of its high-level retired and active duty officers. Many ultranationalists believe TAF has been decimated into an ineffective institution at the hands of Erdogan.

Although most of the arrested officials are out of prison, the Balyoz and Ergenekon cases have hurt TAF on multiple levels. Even government officials, speaking in confidence, accept that in “an effort to curtail the military’s power to intervene in politics, maybe we have gone too far.” For that, most pro-AKP pundits blame the Gulen movement. Still, the AKP elites seem quite comfortable in keeping TAF out of the public eye. “Why would you need multiple disclosures from the state?” one bureaucrat asked Al-Monitor.

For decades, TAF was the most trusted institution in Turkey. Its reputation was tarnished significantly by the prosecutions, yet Pew Research polling in July 2014 showed that 55% still believe military’s influence to be “good.” Despite the decrease in the percentages, no other Turkish institution outranks the military.

Having observed active duty and military officers at the rank of colonel or higher in international settings since 2001, I would say that Turkish officers have always been reserved even in settings that apply Chatham House confidentiality. It has gotten worse. I spoke with more than 10 officers in July, and even the retired ones did not want to reveal their names. Mostly, it was their families who warned me kindly that having served in “terror zones,” they feared repercussions if their identities were revealed. Most of these officers feel betrayed and complain of “low morale” in the ranks. A retired brigadier general told Al-Monitor, “TAF has the power and ability to face IS forces both inside and outside the borders, yet in urban warfare it is impossible to prevent civilian casualties. That said, armies only act if there is a political will and decision to act. We need the support and trust of our people.” A two-star general added, “Look under the category of “important border events” on TAF’s Web page, you will see several cases of smuggling. The open border policy was a political decision. Now, there is a decision to monitor more diligently. How much more diligently? It is unclear. We all want to catch the criminals and help the civilians, yet it is not easy.”

It is an intriguing fact that both Turkish and Kurdish nationalists are critical about who is allowed to enter in through the southeastern border. Both of these groups argue that the ethnic population balance of the region is altered deliberately: “too many Arabs” is their common complaint. While Turkish nationalists gripe, Turkmens of the region are ignored; Kurds protest that ethnic Kurds such as Yazidis face hardships at the border.

The border is chaotic. Mehmetcik TV, a private TV channel, is not officially linked with TAF but reports TAF news. (Mehmetcik is an affectionate Turkish term, that may be translated as “GI Joe,” a soldier.) The Web page has dozens of videos showing “smugglers” who are arguing with the Turkish army as they cheer for “Tayyip Erdogan” (the Turkish prime minister for 11 years who becomes president Aug. 28). A retired colonel who shared these video links with Al-Monitor said, “Now, watching these, tell us what would you do? Do you allow these smugglers who have established links — although illegal — with the local population since 2011 or do you engage them with fire? Are they combatants? There are serious gray areas because the political will is not clear. In addition, the soldiers are concerned because they are easily made into scapegoats. If there is a political determination to secure the border, TAF, with the air force and army, has the capability to secure the border with adequate technological updates.”

All generals I spoke with had close friends who had served time in prison. They were hopeful that elements of the Gulen movement would be eliminated in TAF and bureaucracy soon. Once they can see the government’s trust in their institutional value, restoration of confidence would be only a matter of time. After all, as the Hizb-ut Tahrir’s representative emphasized, TAF ranks eighth among the 35 most powerful militaries in the world, with quite modest financial support in comparison with other armies.

Will Erdogan’s “New Turkey” attempt to restructure the armed forces when the “Gulenist threat” is cleared? If so, would this be an army that belongs to NATO or one that would carry out the duty of jihad as some Islamist groups demand? These are far-reaching questions, yet it is a fair conclusion that how much Erdogan’s “New Turkey” will listen to the advice of its own military in the near future will be crucial in facing the “new” threats emerging from the southeastern borders.