In just one example of a deep-rooted Turkish culture of snitching, a marriage comes to an end when a husband tells his wife she can offend him, but not his president, and reports her to the authorities. 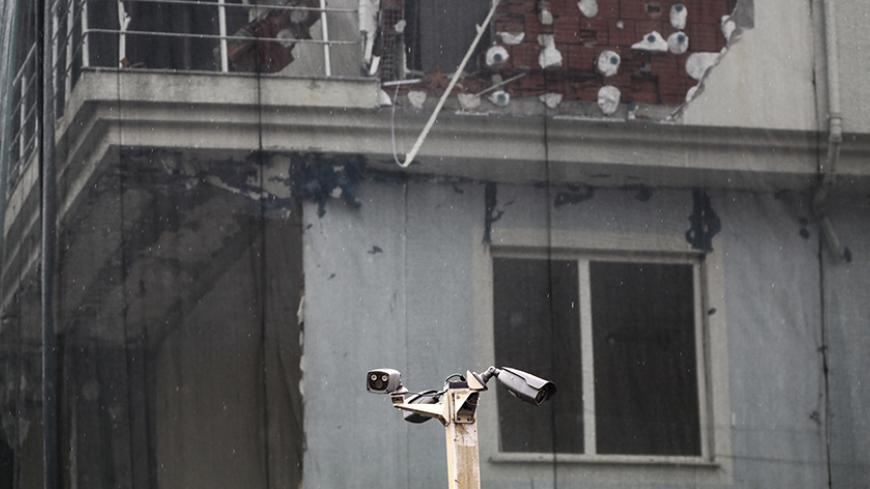 Surveillance cameras are seen in front of a police station after a bombing attack in Istanbul, Aug. 10, 2015. - REUTERS/Huseyin Aldemir

They say politics can be a dangerous topic of conversation. Even some marriages don't survive a difference of political opinion. But one husband in Turkey took things even further.

On Feb. 22, Izmir truck driver Ali Dinc took his wife to criminal court for allegedly insulting Turkish President Recep Tayyip Erdogan. Dinc appeared on television, saying, “I would do the same if it was my father who was offending Erdogan.

"My wife was cursing whenever Erdogan appeared on television. I warned her several times not to do that. I told her our president is a good man, he has done well for our country.” But she was obstinate. Dinc claimed his wife dared him to record her statements. So he did, and he used the recording on his phone as evidence at court.

Dinc told reporters he was sad about ending his marriage, but did not regret his snitching. He could have accepted his wife insulting him, he said, but he could not tolerate insults against the president. On social media, the focus was on the husband’s lawsuit. Most commentators ridiculed this startling news as Erdogan’s ability to even destroy nuclear families, while several raised comparisons with George Orwell’s novel "1984," in which brainwashed children inform on their parents to the authorities. Dinc's case was discussed as the first in Turkey where an individual's opinion, expressed inside a private home, was taken to court in the accelerating trend of citizens' being sued for offending Erdogan.

This case is representative of Turkey's deepening culture of snitching.

The battle between Gulenists and the government has helped people justify becoming an informant, as Erdogan and other Justice and Development (AKP) members have repeatedly told the public that Gulenists have been blackmailing prominent businessmen and even ministers. Erdogan has also asked mukhtars — elected heads of villages and towns — to keep track of every household. It seems snitching is not only encouraged, but also rewarded.

Just a couple of news reports from last week are quite eye-opening.

On Feb. 24, there was a stomach-churning allegation that at the private junior high school in Ankara where Minister of Youth and Sports Akif Cagatay Kilic’s 14-year-old daughter attends, a commentary from her peers on the WhatsApp messaging chatroom allegedly caught the attention of the Ministry of Education. Then it was reported that two students were disciplined for offending the president.

A complaint can also be made against a private entity. For example, independent IMC television channel, known for its blunt criticism of the government, was taken off the air Feb. 26 after a prosecutor alleged the station was “spreading terrorist propaganda.” Ayhan Bilgen, a lawmaker from the pro-Kurdish Peoples’ Democratic Party, challenged the action and brought the matter to the attention of parliament.

“There is an institute responsible for oversight with the media, but it has been bypassed," he said. "How can a complaint take a network off the air without due process?” His questions reflect a lurking threat of the AKP government conveniently labeling all criticism against it as support for terrorism.

The culture of snitching has taken root so deeply that social media is being used to generate and convey complaints to authorities. For example, on Feb. 19, Deputy Prime Minister Mehmet Simsek used Twitter to call attention to a threatening tweet from the People’s Protection Units, the armed Syrian Kurdish group known as YPG. He addressed the retweet “to the attention of our ‘Western allies’ who are flirting with YPG.”

In addition, pro-government journalists frequently threaten and complain about their colleagues publicly. Even social media posts or retweets can be used as tools to file complaints about reporters to their employers.

Anything you have shared or posted on social media, from a satirical meme to a comment, could have you labeled as a spy, sexist, traitor and, of course, as a terrorist. Not even prominent members of the AKP are immune to attacks if they dare to speak up.

While state authorities are used to restricting freedom of expression from academia to the private domain, such as one’s home, any sort of criticism from dissidents is viewed as treason — as, well, snitching against one’s own country. Even simply reporting the existing news in an English format could have one labeled a traitor or spy.

Indeed, some pro-government journalists have kicked their battle against "traitors" up a notch. Although a few pro-government newspapers already report in English, it must not have been enough to satisfy them. They have invested in a website that focuses exclusively on how inaccurately the foreign media reports on Turkey. Words commonly seen in the headlines on the site include “factual mistakes,” “distort and misinform” and “misrepresent." It seems personal attacks and bickering are a lucrative trade for some in Turkey.

Umut Ozkirimli, a Lund University political scientist specializing in Middle Eastern studies, was asked what we can expect from this trend in the near future.

“Snitching culture is a signpost of authoritarian regimes such as the Soviets [during the Cold War]. One day when this regime is over, there will be no viable society. People will not be able to trust each other," Ozkirimli told Al-Monitor. "Today’s victims will likely seek revenge. Society’s willingness to coexist is diminishing. Because there is a lack of trust in the legal system, a perpetual informant system emerges.”

It is a safe prediction that until rewards are replaced with public shaming for informants, snitching will thrive in Turkey. Until then it may be wise to assume that marriage vows imply an “until snitching do us apart” clause.