How Erdogan spins flaws into gold

Turkish people are falling in love with President Recep Tayyip Erdogan all over again in the post-coup era despite the emergency decrees, increasing terror attacks and continuous purges. 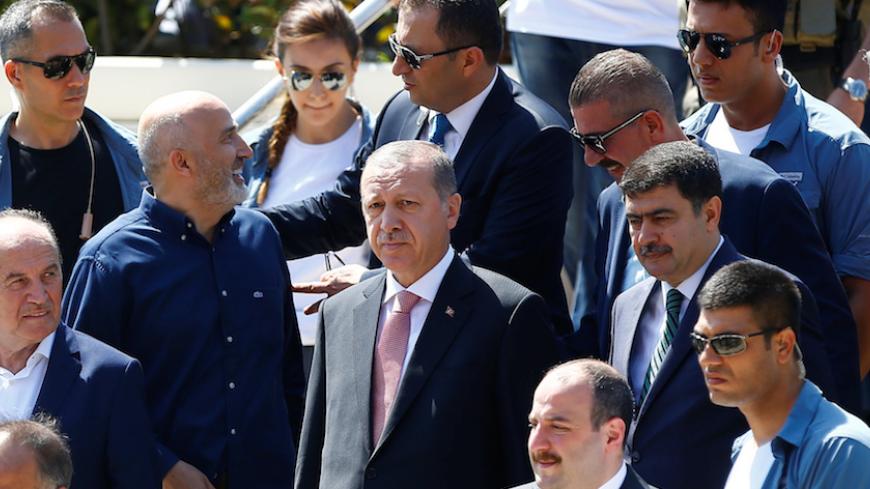 If a political leader fails repeatedly, it is expected that he will eventually lose power. Throughout his reign as prime minister and president, Recep Tayyip Erdogan has admitted many times to being deceived by his allies and best friends. His failures have had a high cost for the country. Syria’s President Bashar al-Assad, the pro-Kurdish Peoples' Democratic Party and the Fethullah Gulen movement, just to name a few, have all managed to mislead Erdogan. Indeed, Gulenists have fooled Erdogan multiple times since the December 2013 corruption scandal. In his frequent public speeches, Erdogan is notorious for uttering a comment and then vehemently retracting or denying it at another appearance.

In any other time and place, a political leader who flip-flops this frequently would pay for it in the next election. This is not the case in Turkey. On the contrary, in every election Erdogan has come out stronger, and in every public gathering he has managed to attract a bigger audience than any other leader in the country. This has been a major embarrassment for the pundits who repeatedly claim Erdogan’s power has diminished.

So what is Erdogan’s secret? How could there be growing support for a political leader who has repeatedly been conned in domestic and international politics?

Between July 16 and Aug. 8, Al-Monitor asked several participants at pro-democracy rallies in Ankara and Istanbul these questions. Here is a brief explanation of Erdogan’s exceptionalism in their eyes.

The most commonly expressed reason: “He is one of us.” Even though Erdogan lives in a palace and travels with hundreds of security personnel, people still view him as approachable and friendly. The way that Erdogan expresses himself — simple, one dimensional, easy to follow — resonates with many who attend these rallies. It is palpable that Erdogan lulls them into a sense of comfort, security, predictability and long-lost sense of national pride. Even though almost every other week the country is rocked by a brutal terror attack costing dozens of lives and millions of dollars, people believe the security issue is not caused by Erdogan, but persists despite his best efforts.

Next is the determination that everyone against Erdogan is against Islam, and therefore must be punished. The way that Erdogan utilizes language and symbolism is vague but potent. Even if at the end of the speech the listener is not quite sure what the point was, he is filled with emotion. Erdogan’s words are much like the jingles of his campaign. They manage to whip submission and fear into a highly emotional crowd that is ready to cheer for whatever he says.

This unconditional love and acceptance ties into the second reason they do not demand accountability or question if he is fit to be the leader of a democratic country while repeatedly failing to deliver on his promises. One Istanbul street vendor who is also from Erdogan’s hometown of Rize told Al-Monitor, “Erdogan has been fooled because he is good-hearted. Why punish him for the crimes of the others? The ones who deceived Erdogan are the guilty ones, and hence they are ones we should punish.”

An American scholar who has resided in Turkey for the last decade concurred with these statements, saying, “Erdogan’s magic lies in the fact that he can consistently renew and reinforce symbols. His hand gestures, his slogans, his songs, they appeal to the people and instill a sense of belonging in them. When he says he was cheated, people do not think of it as he failed, but rather he comes out clean and the failed policy is indeed now a betrayal. He is seen as a good Muslim because his heart is in the right place.”

Indeed, accountability is not a word that is heard much in the news or in daily conversations in Turkey. As on Aug. 3, one bureaucrat waving a Turkish flag in front of the National Intelligence Agency told Al-Monitor, “Erdogan only bows before God.” The way that accountability is viewed in Turkey nowadays is not based on facts but rather on emotions, and Erdogan is exceptional in his ability to detach meaning from fact.

Erdogan’s magic is potent but it still requires a few tools handled with finesse. One of the most important is the media. Erdogan acknowledges the importance of journalists, whether they are complimentary or critical of him, and rewards and punishes accordingly. The best way to grab people’s attention and hold it in Turkey is through television.

Erdogan has a near monopoly over what appears in the news day in and day out. After the coup attempt and the state of emergency declaration, media restrictions and the purge of critical journalists (even those unrelated to the Gulen movement) have skyrocketed. The education system is under strict surveillance, and regulations require strict obedience from both teachers and college professors. Anyone who steps out of line risks losing a job and being scolded over social media as a spy, traitor or even a terrorist. To make matters worse, all branches of art from caricature to theater, ballet and sculpture are suffocating with disappearing state funds, arbitrary government regulations and increasing purges.

Yet the crowds attending the massive orchestrated rallies believe this is all for the good of the country. One participant at an Aug. 6 rally in Taksim, Istanbul told Al-Monitor, “He is the man! He does not need deliberation that will only slow him down. If he made all the decisions on his own, without all these obstacles like the Constitutional Court or opposition parties, we will be much better and richer. All these institutions slow him down.”

Another reason for this blind support is the security deficiency. Since the elections of June 7, 2015, Turkey’s vulnerability has increased. When times are rough, the nation is constantly called to stand united, stay alert and snitch on their neighbors, and the easiest way to safety means standing up for the leader, Erdogan.

To Erdogan’s rescue in blaming all that is gone wrong on those who betrayed him are his beloved conspiracy theories. The United States, for example, is the usual suspect for everything wrong in Turkey, an easy enemy du jour. On the news, Turks have been watching nightly confessions of Gulenists who tell the country about several terror incidents that have happened due to their own deliberate ignorance of intelligence and deliberate failure to comply with standard security procedures. Israel-bashing, which used to be a favorite activity for the AKP elites, is no longer popular. Now that Erdogan has agreed to normalization of relations and scolded the Islamists who dared to speak against him, no one dares to include the Mossad as a potential culprit.

Overall, we see that common sense and logical discussions are disappearing from the Turkish social space, signaling a troubling intellectual decay. Erdogan has managed to control almost all artistic expression that could affect the Turkish mindset and tarnished the reputation and credibility of anyone who dares to speak up against him. Hence, when he says he is betrayed, the masses keep clapping and feeling proud of him.

As one scholar told Al-Monitor, "Erdogan’s politics is anesthetic to the masses, hence the real pain is not yet acknowledged." Perhaps that is Erdogan’s magic.