Senior Turkish intelligence officers say the $140 million budgeted for their agency's new headquarters reveals there is more going on than meets the eye. 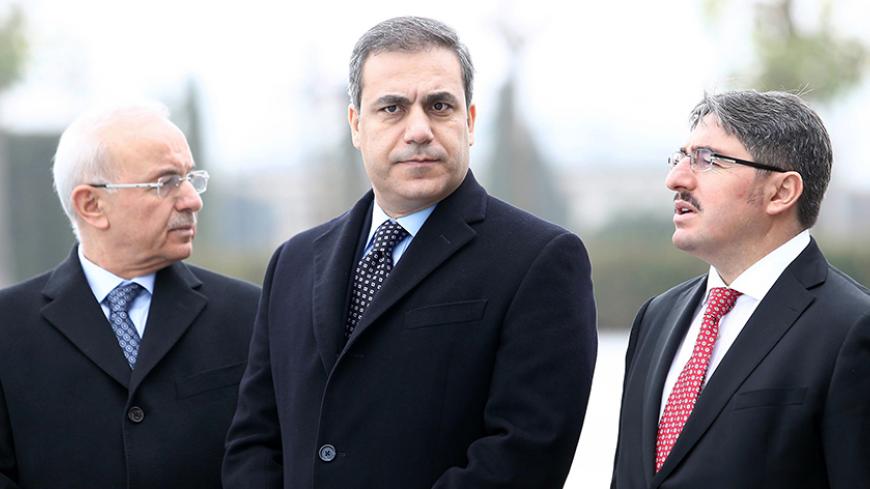 Turkey is transforming its National Intelligence Agency (MIT), expanding not only its headquarters, but its operations and reach.

The MIT traditionally has been seen as a domestically oriented, meek secret service, mainly spying on its own citizens. Now, however, it is engaged in border security and surveillance, coordinating paramilitary troops abroad and developing its own internal structure to include foreign and domestic intelligence operations. For example, new laws allow the MIT to monitor the activities of the financial crimes investigation board.

On Jan. 27, Deputy Prime Minister Lutfi Elvan told the media that the MIT will have significantly higher expenses this year due to capital investments, particularly for a new headquarters. That figure represents an increase of almost 48% for 2016 — about $140 million (414 million Turkish lira) — most of which is designated for a new compound. The agency has been criticized roundly in the media for lavish spending.

When word of the preliminary budget first was announced in October, the daily Cumhuriyet penned a searing analysis titled “Rewarding the fiasco: Raising MIT’s budget.” It said the exorbitant increase was perplexing, since the agency has failed to provide accurate information to prevent the increasing terror attacks. When the final budget figures became public Jan. 27, Turkish social media was flooded with criticism. Most saw it as lavish and unnecessary spending. Satirical site Eksisozluk asked, “Why spend 400 million Turkish lira for MIT, which cannot even catch a suicide bomber before he blows up?”

Al-Monitor spoke with senior MIT bureaucrats by phone, asking them why Turkish taxpayers should spend $135-140 million for a new building. The following answers were crossed-checked with other sources.

Currently, MIT headquarters is in an area that was once a distant suburb of Ankara, but now has become part of the capital. To put it in perspective, Ankara’s population has almost doubled since 1990. Hence, MIT headquarters, with buildings dating back to the 1970s, is now in the middle of the bustling city. This causes some serious security concerns, as all buildings in the vicinity have to be constantly monitored but are too old to accommodate newer technology.

With the widespread use of drones and satellite imagery, all movements at the current headquarters can be easily tracked by outsiders, again increasing vulnerability and costs. The current complex has five or six unattached buildings, making it easy to identify anyone entering any building.

Despite patchwork attempts over the years to maintain the MIT's buildings and keep their infrastructure up to date, the agency has experienced losses of classified information. MIT officials said they are quite concerned about personnel data and other information being subject to cyberattacks. Officials determined that it would be too expensive to retrofit the existing buildings and that such efforts would fail to provide even the minimum advanced security requirements. Other countries have experienced similar issues; in recent years, intelligence agencies in Germany, Australia and other countries have moved into new compounds.

In addition, the MIT's urban location is making city planning and zoning quite difficult for the neighborhood. For example, in 2014, the city of Ankara and the MIT disagreed about the proposed path of cable cars connecting a major park with public transportation. The path would have passed over MIT headquarters, which the MIT considered a security concern, so the cable cars’ route was rearranged.

Today, MIT offices are scattered over Ankara. The new complex will allow headquarters operations to be consolidated in one place, decreasing the cost of communications and security. The move is expected to improve performance, the officials said.

The rise of the US dollar against the Turkish lira has not helped the MIT, either. Expenses for electronic and signals intelligence and foreign operations divisions are incurred overwhelmingly in US dollars.

The MIT's budget has increased 419% in the past decade, but officials pointed out that the agency has had to expand its staff, functions and space during that period. Once again, senior MIT bureaucrats cited the need for a larger location that is better suited to accommodate cybersecurity technology, growing foreign intelligence gathering and analysis units.

The MIT plans to sell its current buildings and land to TOKI, the Housing Development Administration, to help cover the expenses of its new compound. The old and outdated buildings are not particularly worth much, but because the city has grown, the land has gained significant value. The sale is expected to pay for a large part of the new headquarters.

Al-Monitor has reported in detail the agency's restructuring under Hakan Fidan, who took command in 2010. Foreign intelligence and espionage operations targeting Turkey have grown substantially in recent years with Turkey's increasing role in Syria and the changing nature of the Kurdish conflict in the region. In 2011, the MIT established its own academy, another sign that it aims to curtail its dependence on other ministries and agencies in Turkey and increase its cooperation with foreign intelligence services.

What we are observing here is a national intelligence agency that has become a prominent player in the decision-making process for Turkish politics. Open-source reports show that Fidan acts as a shadow foreign minister. He is present in almost all high-level meetings with the president and prime minister. It is an open secret that both the president and the prime minister trust Fidan more than any other bureaucrat. Fidan's omnipresence has generated stiff competition among Ankara’s other bureaucratic agencies. Social media postings and print media comments express serious concerns that Turkey is becoming a police state.

Yet regardless of such claims, we see that as Turkey closes down certain embassies and pulls its diplomats from sensitive locations — in a sense, diminishing the global outreach of its Foreign Ministry — the MIT continues to develop networks and connections in these and other countries that do not have official or friendly relations with Turkey. In many countries, particularly Syria and Iraq, the MIT has been much more active than Turkey's foreign and defense ministries. This is a trend we can observe in other Middle Eastern countries such as Israel and Iran. Would it be wise for Turkey not to invest in foreign intelligence gathering and analysis while its neighbors and allies are expanding their reach?

About a year ago, Ankara was bustling with rumors that Fidan was destined to become the foreign minister, which is seen as a more prestigious position than MIT chief. Given the recent developments, we can now wonder whether it is better, for the country’s interests and for him personally, for Fidan to remain undersecretary of national intelligence — whose position includes the shadow roles of the foreign and defense ministers.