The resignation of intelligence chief Hakan Fidan to run for parliament becomes the center of debate in Turkey. 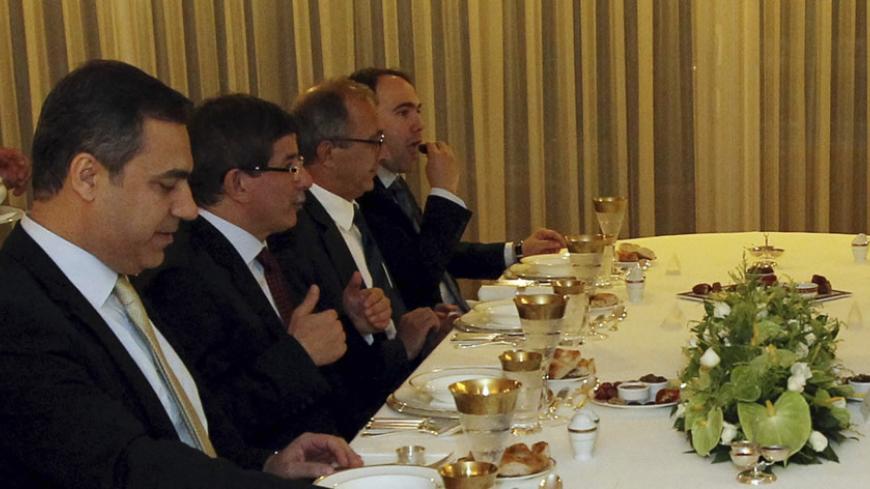 As the clock hit midnight Feb. 7, news broke in Turkey that Hakan Fidan, head of the National Intelligence Agency (MIT), had resigned. Although no official announcement was made as to why he resigned, none was needed. Everyone knew this meant that Fidan would be running to become a deputy for the Justice and Development Party (AKP) in the June 7 parliamentary elections.

While his resignation ended one puzzle, it opened up quite a few others for Turkish rumor mills. Ankara has been buzzing with all kinds of possible scenarios on what future political position Fidan would assume. Almost all pundits are confident that he did not resign his post simply to become a deputy. While tradition calls for members of parliament to be appointed to Cabinet posts, President Recep Tayyip Erdogan, when he was prime minister, on several occasions assigned outsiders to be ministers. For example, current Prime Minister Ahmet Davutoglu was appointed foreign minister before he became a deputy in parliament. Current Interior Minister Efkan Ala is another example. Quite a few pundits thought that Fidan could have resigned after the elections and be appointed to a Cabinet position. Yet, he has resigned now. Why?

As the events unfolded, Al-Monitor spoke with two senior government officials. On condition of anonymity, these officials provided important insights into three crucial questions: the reasons why Fidan resigned now; who will replace Fidan; what is Fidan’s five-year legacy in MIT and what can we expect for the institutional setup in the near future?

Trying to sift through the intriguing scenarios circulating in Ankara, here are the most sober answers Al-Monitor gathered:

The timing of the resignation

The date Feb. 7 stands out as a message to the Gulen movement as it was the third anniversary of when a prosecutor summoned Fidan to his office for questioning. This is seen as the day Gulenists declared war on the AKP. By selecting this day for his resignation, Fidan sends the message to Gulenists that their quest to harm the AKP has failed. A senior bureaucrat affiliated with the security apparatus told Al-Monitor, “Fidan opted to follow the procedure to be in the parliament [to become a minister]. He could have been appointed from outside, yes, but why should he? He wants to be in parliament for two reasons: First, he believes he has done his best at MIT, and now it is the right time to move on; second, when you are a bureaucrat, however high your position is, in Ankara you are merely a government employee, not an “elected” representative. There were allegations by the opposition that Fidan wants to be a deputy for parliamentary immunity. But the official immunity that the head of intelligence agency enjoys surpasses those of legislators.

Not all AKP members cheered Fidan’s decision. Deputy Prime Minister Bulent Arinc, learning about the decision on live TV, blurted out with a puzzled look: “It would be a waste for Fidan to resign such a post with Superman powers.” Several others along with Arinc questioned whether it is ethically appropriate for the head of intelligence to accept a Cabinet post. Although there are plenty of international examples, such as former US President George H.W. Bush and former Secretary of State Robert Gates, in Turkey there is no precedent. Fidan is the first to make this transition from top spy chief to a Cabinet post.

When asked about Arinc and opposition leaders’ comments about Fidan’s candidacy, another senior official told Al-Monitor, “Criticism cannot be avoided in politics. Fidan would have been blamed for monopolizing the intelligence agency had he stayed on.” Fidan is the confidant and protege of Erdogan. His resignation now is the most comfortable way to make sure he is in parliament after the elections, given the uncertainties awaiting with the proposed new constitution and presidential system transition.

Who will replace Fidan?

It was announced Feb. 7 that the deputy secretary of MIT, Ismail Hakki Musa, a former ambassador, would serve in Fidan’s position until it is officially filled. Still, it is likely that Fidan will remain de facto head of the agency until the elections. Several names to replace him after the elections are circulating among pundits, party members and journalists in Ankara. Arinc uttered the name of the undersecretary of Public Order and Security, Muhammed Dervisoglu. However, senior officials dismissed that speculation and told Al-Monitor that a surprise name will become the head of MIT after June.

Fidan’s legacy and the future of MIT

Fidan was appointed as head of the agency in May 2010. Since then, the agency has gone through a transformation from being a passive, detested and feared deep-state tool into an alleged CIA-like institutional reformation that has managed to sit tight in the eye of several political and military storms. Particularly in the last couple of years, Fidan’s team has successfully managed to turn the controversial international and Gulenist press coverage into his advantage. Fidan has emerged as a national hero along with Erdogan. Before Fidan, Turkish prime ministers feared MIT rather than trusting its briefings. A short list of Fidan’s reforms is as follows:

AKP officials are confident that MIT will keep on working as if Fidan were still there.

As Hayko Bagdat, a prominent journalist, joked: “Has anyone in Turkey ever heard Fidan’s voice?” Although his name and photo have been in the headlines frequently in the last five years, little is known about Fidan’s private life and personality. Fidan has been a stark contrast in the midst of loud and colorful AKP personalities; he is reticent, unpretentious and definitely a loyal secret-keeper, as Erdogan described him. The majority of commentators believe he will be the next foreign minister. Although we cannot definitely say which post he will assume after June, we can confidently say this resignation changed little. That is, Fidan has long been “the No. 2 man” in Turkey, and will continue to be. Whatever post he assumes, that position will be at the center of power and action.