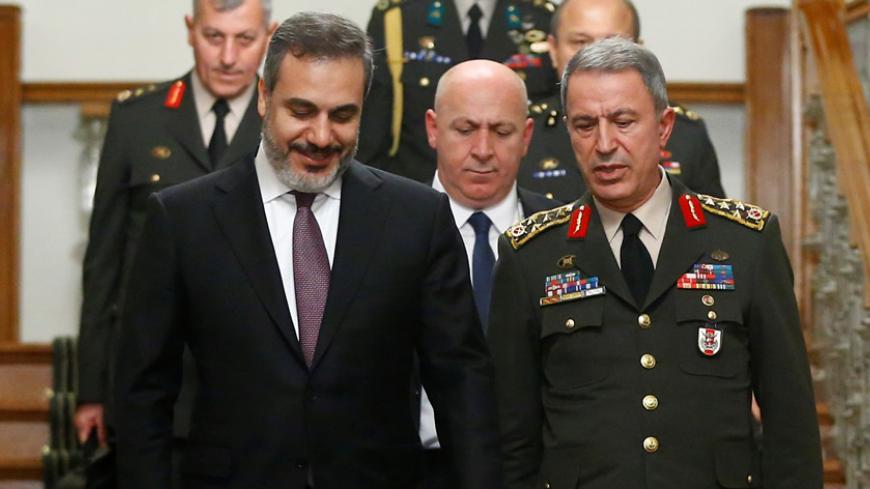 As emergency law becomes the new order in Turkey, several institutions are being reformed, shut down or promptly restructured. With each new executive decree that passes as law, Ankara bureaucrats have been wondering whether the National Intelligence Organization (MIT) would be affected as well.

Al-Monitor was one of the first to be informed Nov. 4 that the long-awaited changes had been finalized within the MIT; the information received came directly from senior bureaucrats of the agency. The MIT used to have four main departments, each led by a deputy undersecretary. In the new setup it will have six. To put this in perspective, when Hakan Fidan became the director of the MIT in May 2010, there was only one position of deputy undersecretary. The Nov. 4 decision is more than just about the addition of new offices; responsibilities are rearranged in addition to the scope of each office.

There are three main changes that could give us clues about what we can expect from the role of the MIT in Turkish bureaucracy. First, two new departments have been created. One is the position of a new deputy undersecretary for coordination among state institutions. This unit is quite important as communication between different institutions of the state has become a serious hurdle in the aftermath of the coup attempt. As the state system is reorganized, keeping communication channels open has become a priority for the MIT as well. This unit is important in order to understand that the MIT is no longer an isolated entity, operating in a vacuum, but indeed does carry out day-to-day interactions with the Interior Ministry and Foreign Ministry as well as other ministries and agencies. Its reports and activities are now coordinated with several different offices on a daily basis, breaking the mysterious, unreachable aura of the intelligence agency within the state system.

The next long-awaited position created is that of deputy undersecretary for special operations. The establishment of this unit tells us that Turkish adventurism is not to be quelled any time soon. To the contrary, it will expand because now we see the government is willing to spare more funding and human resources to special operations. The institutionalization also tells us that Turkish presence in Syria and involvement in Iraq will be coordinated from this center and that this unit is set to grow in the coming months. The MIT is likely to remain the key Turkish player in Syria and Iraq above all other Turkish institutions.

The second important change is the technical intelligence unit, which has a new, young, much-admired bureaucrat as its deputy undersecretary, Cemalettin Celik, and a new mission statement. Celik is in his mid-40s and brings enthusiasm and energy to the agency. He has a security background and gained expertise in technical matters. He is no stranger to the MIT because he joined the agency in 2012. He became the deputy of the Turkish Telecommunications Directorate (TIB) in December 2013. As Gulenists had infiltrated that agency heavily, the TIB was shut down after the July 15 coup attempt and Celik returned to the MIT. Fidan and Celik have a long working relationship; Fidan is known to appreciate and trust Celik's professional skills. He is also known in Ankara as the man who works diligently to battle the Gulen movement. His nomination and the redefining of the unit’s mission indicates that cybersecurity is a clear priority for the MIT, and it aims to design this unit to resemble the National Security Agency of the United States.

Another crucial name in the agency is Yavuz Celik (not related to Cemalettin Celik), who joined the MIT in 2013. Yavuz Celik has been a long-trusted colleague of Fidan's as well. In his early 40s, Celik is seen as one of the key figures who designed and facilitated the notorious MIT legislation of 2014. He is also known for his interagency communication skills and his knowledge of the bureaucracy. Now he has been nominated as the undersecretary for the internal administrative services.

Like Fidan, these men are seen as political appointees and they have been the target of criticism that the MIT was being turned into an institution of the Justice and Development Party rather than being one of the state. Now, in these days of emergency law, no one questions these matters anymore.

Most importantly, these changes indicate that the balance of institutional power in Ankara is settling. After July 15, Fidan’s reputation and the MIT’s credibility were tarnished with deep-seeded questions about why the MIT had not discovered the coup plot in advance and why Fidan had failed to inform Turkish President Recep Tayyip Erdogan in advance. When Erdogan told the press that he learned about the plot from his brother-in-law — and not Fidan — both international and national audiences were perplexed. Several pundits were convinced that this time Fidan would be fired. In the immediate aftermath of the coup, Fidan’s reputation was tarnished as a result of intense criticism. Yet the latest expansion of the MIT informs us that those days are over. Fidan’s power or position is not at risk. To the contrary, the newly appointed young bureaucrats and expansion of the MIT show that he has managed to repair the relationships with Erdogan and others, and maintains his trustworthiness within the system.

In addition, both special operations and interagency coordination and communication units signal that the MIT will remain a crucial player in both regional and domestic politics. In the near future, we can expect the MIT’s involvement in Syria to intensify and for its role in coordinating between the Ankara agencies and ministries to grow. We also see that the changes will expand the MIT’s outreach abroad. The recent restructuring of the agency barely involves any domestic matters. What can we make of this?

The recent changes in the MIT should be seen as a precursor of a major reform to come in the Turkish intelligence establishment. If Erdogan accomplishes his ambition for a new constitution that will empower him as an executive president, a new entity is expected to be created just for domestic intelligence. In this case, it will be a safe bet that the MIT and any other possible new branch of intelligence will be brought under the direct control of the presidency in the new system. Under Erdogan's planned presidential system, the MIT may become yet even more powerful.