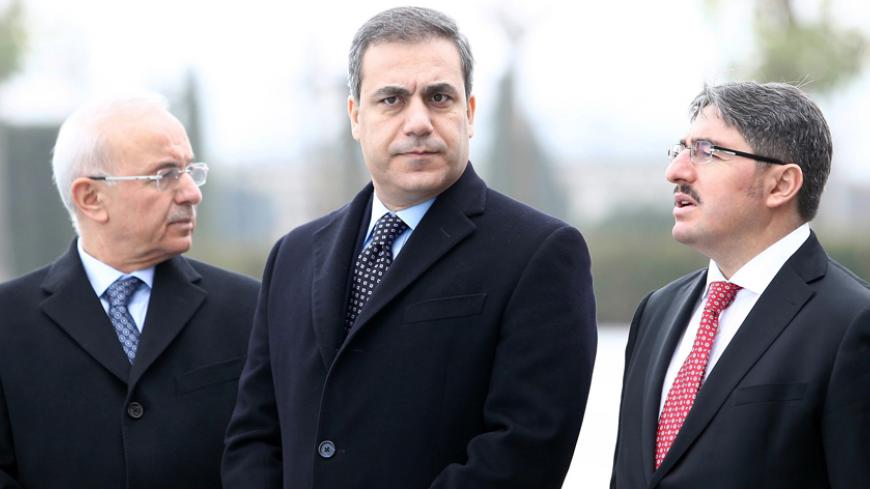 The resignation of Turkey's intelligence chief, Hakan Fidan, and his subsequent decision to run as a candidate in the upcoming parliamentary elections, has upended Turkish politics. At first, President Recep Tayyip Erdogan gave his blessing to Fidan's resignation and his Justice and Development Party (AKP) candidacy, but in a recent statement given at the airport before taking off to Latin America, Erdogan was less accepting of the resignation — making innuendos that would have an earthquake-like effect in Ankara.

This marked Erdogan’s first ever negative comments on Fidan. For five years, Erdogan relentlessly backed and praised the intelligence chief, as US-based preacher Fethullah Gulen’s team tried to remove Fidan from his post. This was actually the core of Erdogan’s war against Gulen.

Erdogan’s surprising admonishment of Fidan continued on the flight to Latin America, as he stated: “The MIT [Turkey's intelligence agency] is not your regular organization. Its head must be fully trustable. That is why I had brought [to that post] someone I could have as keeper of my secrets. … I don’t agree with his decision to resign because of fatigue. … Now, it is up to the prime minister to propose his replacement. Who that will be is truly important.”

Where does Prime Minister Ahmet Davutoglu stand in this imbroglio? As reported by Hurriyet's Deniz Zeyrek, when Fidan announced his resignation, Davutoglu clearly stood by him, saying: "No matter what job he assumes, he will do his part. He is courageous. There will be many fields where he will serve this country. I will always have a positive position on Mr. Hakan on all issues."

Zeyrek writes: "I asked Davutoglu his assessment of what Erdogan had said about Fidan. Davutoglu replied, ‘I already expressed my views and I still think the same.’ When I persisted for an answer, he smiled and said: ‘OK, you can take a photo but no further questions.’

"Sources close to Fidan and Davutoglu are convinced that the two men are in full harmony. Davutoglu had actually wanted to have Fidan as a foreign minister in his August 2014 Cabinet but Erdogan refused. [He] wanted Fidan to stay as the head of the MIT. This time, however, the Fidan-Davutoglu duo overrode Erdogan’s wishes."

Zeyrek quotes a senior official as saying: "[Fidan] cannot return to the MIT. He will run in the elections. The president does not worry about the success of Fidan in politics. This emotional mood will dissipate, and both the prime minister and Fidan will receive the full support of the president.”

Sources close to Erdogan say he is upset with both Fidan and Davutoglu. Erdogan had insisted that Fidan remain at the MIT because he was in charge of certain vital projects, like the solution process with the Kurds — a process that has reached a critical phase — and the Turkish state's war against Gulenists. Furthermore, the MIT is trying to be a leading actor in the Middle East. According to these sources, Erdogan thinks that Fidan would not have resigned unless he had Davutoglu’s backing.

The main opposition Republican People's Party (CHP) says that Fidan — as the custodian of Erdogan's deepest secrets — was able to ignore Erdogan’s thinking. According to the CHP, at a time when the AKP’s heavy guns, like former President Abdullah Gul and AKP Deputy Chairman Bulent Arinc, cannot defy Erdogan, Fidan was able to do so since he possessed a treasure of secrets.

As a writer who knows Erdogan well, my assessment of this development is the following. For Erdogan, today's most pressing issues are: the removal of Gulenists from all state institutions, and the peace process with the Kurdistan Workers Party (PKK). Although he might have rebuked Fidan and Davutoglu, Erdogan knows the determination of these two names against Gulen and their role in the Kurdish solution process. Fidan has been a Gulenist target for the past five years, and Davutoglu never misses a chance to express anger at Gulen. Both Davutoglu and Fidan figured prominently in a top-secret state meeting in March 2014, when top officials discussed the possibility of war with Syria. The leaking of the contents of that meeting by the Gulenists was seen as a threat to Turkey’s national security. Erdogan would not rebuke his two high-level supporters, as they are firm opponents of Gulen. There will be no Davutoglu-Erdogan conflict.

Gul was not as decisive about the Gulenists. Gul wavered in the aftermath of the Dec. 17, 2013, corruption scandal and was erased from national politics. There are no longer comments about Gul being an alternative.