Erdogan, who wants to establish a constitutional authoritarian regime, is taking a big risk by linking the fate of the struggle with the Kurds to his political agenda. 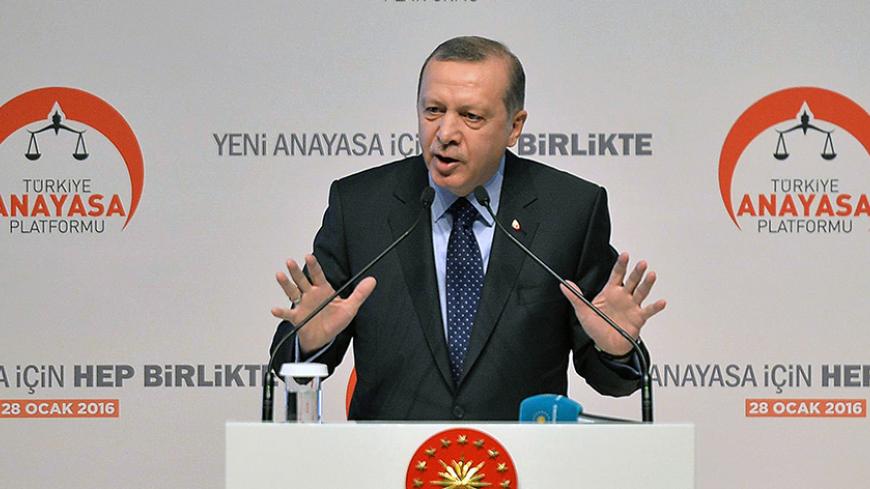 Turkish President Recep Tayyip Erdogan delivers a speech during a meeting on the new constitution at the Congresium in Ankara, Jan. 28, 2016. - ADEM ALTAN/AFP/Getty Images

Turkey’s strongman President Recep Tayyip Erdogan appears to have launched a campaign for a new constitution so he can shape the kind of presidential role he wants for himself.

Erdogan and his allied media have been harping for some time on the message that the parliamentary system in Turkey has become obsolete and must be replaced by a presidential system. Naturally, Erdogan has fully mobilized his Justice and Development Party (AKP) for that goal.

Erdogan is perfectly blunt about his goals and generously offers clues that eliminate the need for speculation. In a Jan. 28 speech in Ankara before representatives of civil society organizations that support him, Erdogan once again described the constitutional framework he wants for the regime, labeling it a “Turkish-style presidency.”

The question of executive rule has to be the core of efforts toward a new constitution. With the "absolute stability environment" that the presidential system will ensure, he says, Turkey will be protected from terror-related risks.

All these remarks clearly reveal that Erdogan aspires to an authoritarian constitutional regime, to say the least. If Erdogan had been aiming at democracy, he would not have labeled and rejected the separation of powers as "strife among powers." He is advocating a concept that sidelines the control and balance mechanisms of democracies.

This is beyond dispute: A regime in which executive power is key to the balance of powers, and all the executive powers are concentrated in the hands of the president, is nothing more than a dictatorship. Moreover, the "absolute stability" Erdogan refers to is a concept foreign to democracy but indigenous to dictatorships.

Erdogan calls his authoritarian presidency regime “indigenous and national.” In his Jan. 28 speech, he used that label when he said, “The Turkish constitutions that have been written so far were … governed with imported commodities, with imported logic. … The constitution that will be based on our own traditions of governance will be a Turkish-style constitution.”

Anyone who knows Turkey’s history will tell you concepts such as democracy, separation of powers, state of law, supremacy of law, human rights, equality, pluralism and the rest are imported from the West. The only governance tradition not imported from abroad but purely native comes from Turkey's former sultan rulers — despotism, absolutism and patriarchy.

If Erdogan is not referring to democracy when he talks about "Turkey’s established governance tradition," today’s reflection of that tradition cannot be anything less than an authoritarian regime.

In crafting the constitutional framework he needs, we assume Erdogan will respect the valid clauses of the current constitution. Erdogan’s AKP does not have a three-fifths parliamentary majority to get the presidential constitution amendment approved and submit it to referendum. In such a vote, the AKP would have to ensure that all its deputies would vote for the amendment, while acquiring the support of at least 14 deputies from opposition parties.

If those 14 opposition deputies cannot be found, the only way to find a parliamentary majority for the amendment would be to take the country to an early election. Of course it will not be easy to lead this country, which went through two general elections in 2015, to a new election without convincing reasons.

We can surmise that Erdogan's regime will follow this type of scenario in the coming days:

The regime will justify the need for an early election with the allegation that opposition parties are clogging up the country's progress. As such, a new blessing is needed from the voters.

Prime Minister Ahmet Davutoglu indicated in a Jan. 26 speech before parliament that he does not favor early elections. Davutoglu said, “There are those who are trying to confuse minds with baseless speculation about early elections. Let me state openly and clearly that Turkey, which achieved democratic stability in the Nov. 1 elections, has no need for an early election today.”

We are aware, however, that Davutoglu’s words do not mean all that much, given Erdogan’s dominant power. If Erdogan persists in taking Turkey to a presidential system, the only way to avoid an early general election is to seduce 14 opposition deputies to support the constitutional draft. Therefore, a new voting process in 2016 appears likely, whether for a constitutional referendum or an early election.

One of the most prominent elements of the Machiavellian game that will be played until the Turks go to the voting booth will be the threat of terror and chaos.

Fear of chaos was the top factor that enabled the AKP to recover in the Nov. 1 elections the parliamentary majority it had lost in June. It's the same threat that prompted Sunni conservative voters to restore the AKP to power Nov. 1. An important pertinent signal came from Islamist daily Yeni Akit, an ardent Erdogan supporter, in a Jan. 28 article titled “Either presidency or chaos.”

Leaving aside the Islamic State (IS) terror that has not yet become a permanent feature, the only element that keeps the chaos and terror threat alive is the war that was launched July 24 against the Kurdistan Workers Party (PKK).

Reaching an agreement with the Kurdish movement could mean loss of nationalist votes that the government wants in a referendum or elections. That could also mean more votes for the Kurdish Peoples' Democratic Party (HDP). But in an early election, Erdogan’s goal is to push both the opposition Nationalist Action Party and the HDP to below the 10% election threshold. If that is secured, then all the seats they would have won will be accrued to the next-strongest party — the AKP. That of course would guarantee enough seats for the AKP to get a constitutional amendment.

It is impossible for the ongoing war to bring about a military solution to the Kurdish question, given the regional power level the PKK has reached and its strategic depth in Iran, Iraq and Syria. Moreover, the battle is not being waged to solve the Kurdish issue; it is being waged to gain a presidential system.

The war is creating its own realities. In some towns where the Kurdish movement is truly powerful, Turkey's use of tanks and artillery to overcome the resistance is generating destruction similar to that in Syria. Kurdish civilians are being collectively punished with extreme human rights violations that leave them no choice but to emigrate. It will not be easy to manage the massive social and political costs this disaster entails.

Moreover, it is impossible to treat this war separately from the Syrian crisis that could turn the Turkey-Russia cold war to a hot strife at any moment. Turkey, with its own hands, is pushing the Kurdish movement to Russia and now risks losing control of its Kurdish issue because of the raging war in the southeast.