Are books and movies promoting smoking and drinking? Erdogan thinks so

Turkish President Recep Tayyip Erdogan’s railing against smoking and alcohol has sparked concerns over censorship of movies and literary works deemed to promote the two "evils." 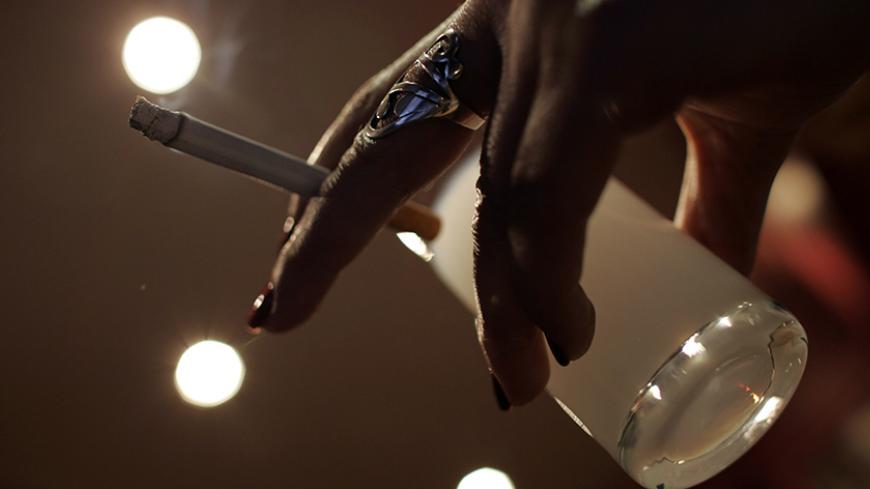 A woman smokes in a bar as she drinks the traditional Turkish alcoholic beverage raki in Ankara, Feb. 12, 2008. - REUTERS/Umit Bektas
Sukru Kucuksahin
February 23, 2016

President Recep Tayyip Erdogan created a new controversy on Feb. 9, Turkey's Quit Smoking Day, when he appeared to link addiction to alcohol and tobacco to poetry, literature and cinema. In a country where censorship is already rife, his remark sparked concern that fresh restrictions might be in store.

On Feb. 9, left-leaning Cumhuriyet, a vocal critic of the government, published a story headlined “Erdogan: Poems, novels and cinema cause addictions just like smoking.” A number of other news sites, including the popular T24, picked up the story, leading many to wonder where Turkey is going and whether poetry, fiction and cinema are under threat.

Sabah, which is very close to Erdogan, slammed Cumhuriyet for distorting the president’s words and quoted him as saying, “Movies, novels and poems encouraging alcohol and smoking have been introduced. As we know, this method has been used extensively in our country.”

According to the state-run Anatolia News Agency, Erdogan said, “Frankly, I believe that the great financial might of the [tobacco] industry is behind music, films, novels and poems encouraging habits that lead to addictions like alcohol and smoking. … You would have noticed that in almost all the movies of the 1960s and 1970s, smoking and alcohol are in the foreground.”

Interestingly, this part of Erdogan's speech was missing from the transcript published on his official website, apparently to head off the growing criticism. Footage of the event, which some TV channels had broadcast live, showed that Anatolia News Agency's report was the most faithful to what Erdogan said.

Why did Erdogan’s words stir controversy, concern and criticism? To better understand the anxiety, one must examine some practices that became widespread in Turkey after the Justice and Development Party (AKP) came to power.

First, restrictions on smoking introduced by previous governments were extended to cover all public buildings under the AKP. The ban enjoys strong public support, including from this writer, who has never smoked.

Erdogan, however, has taken things to extremes, engaging in public arguments with smokers and stoking their defiance. In 2014, for instance, he was touring an Istanbul neighborhood when he noticed a shopkeeper smoking on his own balcony and shouted at him to put the cigarette out. When the man disobeyed, Erdogan scolded him as “impertinent” and called on municipal officials to intervene, exclaiming, “It’s the president telling him, and he is still smoking!” Erdogan also boasts a large collection of cigarette boxes confiscated from smokers he comes across at various events. Before seizing the box, he asks the smoker to sign it with the pledge, “I will quit smoking.”

Separately, Erdogan is known as a politician who never reads a book from cover to cover, but only summaries written by his aides. He is not known as an avid cinema fan, either, but is famous for reciting poems that mesh with his ideology and worldview.

The AKP’s campaign against smoking employs countless ads and posters trumpeting the bans. Any image of cigarettes in movies aired on television must be blurred, even the smoke. The censored imagery has come to include drinks and bare female breasts. Subscription TV channels have also adopted the practice, blurring images of tobacco, alcohol, breasts and buttocks, despite their subscribers paying for a private service.

Alcohol restrictions have also increased. Many restaurants today fail to obtain licenses to serve alcohol or to renew existing ones. Tobacco and liquor can no longer be placed in display windows, and the taxes on those goods are ever rising.

Given this background, the alarm over Erdogan’s remarks was understandable, for he is seen as the mastermind behind these restrictions. In a memorable 2013 interview, he said he considered even occasional drinkers "alcoholics," pointing to the prohibitions of Islam.

All this aside, let's entertain the idea that Erdogan may be justified in associating smoking and drinking with literature, poetry and cinema in Turkey. Not so, according to scholars in the field.

Emin Ozdemir, a prominent literary scholar and the longest serving member of Ankara University’s faculty of communications, told Al-Monitor, “The notion that poems and novels addict people to smoking and drinking is wrong from head to toe. This view could be espoused only by people who have never read a poem or a novel. Literature appeals to both the minds and the hearts of individuals, but doesn’t make them lose control. On the contrary — it makes them think and educates and balances their feelings. Even a chain smoker like [iconic Turkish poet] Can Yucel has never praised smoking. You can’t find a single [Turkish] literary work, including those from the 1960s and the 1970s, that encourages drinking and smoking.”

Secil Buker, a professor in the same department, also disagreed with Erdogan. “In the 1960s and 1970s, Turkish cinema used to draw a very thick line between good and evil. Drinking and smoking were part of the ‘evil’ scenes,” she told Al-Monitor. “And the purpose there was … the reducing of Westernization to drinking and sexual issues and to tell viewers not to emulate such behavior.”

Oguz Onaran, the former dean of the department, agreed that movies might influence drinking and smoking habits, but rejected any systematic encouragement in both Turkish and foreign cinemas. “Yes, cinema can influence drinking and smoking, while music, novels and poems cannot. In the '60s and '70s, such scenes did exist [in Turkish movies], but they disappeared as soon as the extensive harms of smoking became known,” Onaran told Al-Monitor.

“True, the people’s imitation of movie stars is important. Humphrey Bogart is shown as an example in this regard, but a single example is not considered sufficient,” Onaran said. “When it comes to Turkish movies, this argument doesn’t hold much water, for alcohol has not figured prominently in Turkish cinema. The parties in wealthy homes, for instance, are shown in a critical light. The young woman at the party would be incensed by what she sees and leave the place. In short, a systematic praise of smoking and drinking does not exist in Turkish and foreign cinema.”

Hot on Erdogan’s heels, Turkey’s Religious Affairs Directorate issued a fatwa Feb. 10 about music. According to Sozcu, the fatwa declared that making and listening to music that arouses sexual desire and depicts illicit acts in a positive light are sinful.

The fatwa only added to concerns that books, CDs and music videos could be next in line for censorship. Given the increasing number of blurred scenes on Turkish television, such worries are anything but unfounded.