Why Turkey's anti-tobacco efforts went up in smoke

Smoking and drug abuse are on the rise among Turks, and experts blame worsening poverty levels and faltering measures on the government’s part. 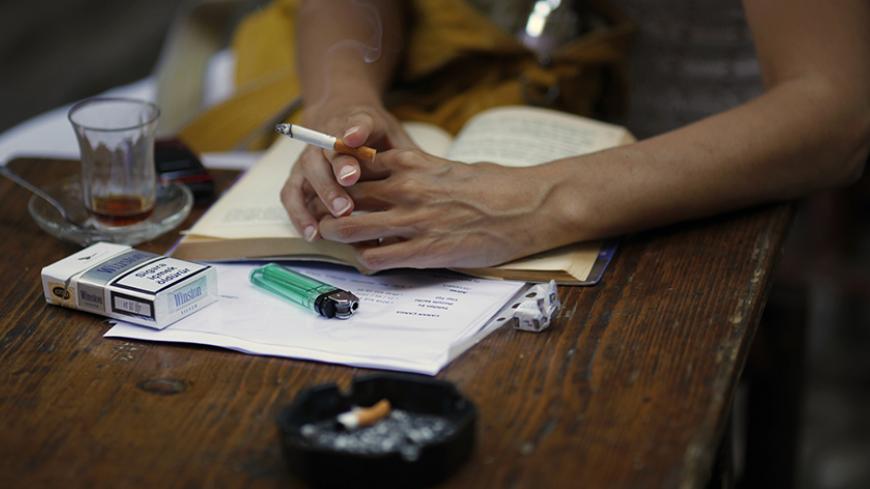 A Turkish woman smokes at an open-air teahouse in Istanbul, July 14, 2009. - REUTERS/Murad Sezer

Following the introduction of a strict smoking ban in Turkey in 2008, the great Turkish folk singer Neset Ertas became the first person to publicly challenge then-Prime Minister Recep Tayyip Erdogan over his tough attitude toward smokers. In a television program in 2009, the late Ertas interrupted Erdogan as he spoke on the issue and said, “Those miserable poor people are already beat. Electricity bills unpaid, water bills unpaid, not even bread and olives to eat. The cigarette is the only thing they have left. Don’t meddle with the people’s cigarettes.”

The link Ertas drew between poverty and smoking seems to have been spot on. The ban, which covers workplaces, restaurants and cafes, among other public spaces, proved effective in discouraging smoking in its initial years, but today Turkey is back to ground zero. Drug abuse is also on the rise.

From 2008 to 2011, tobacco consumption in Turkey fell to less than 100 billion cigarettes per year. In 2015, the figure stood at 125 billion, including contraband cigarettes and loose tobacco, according to Elif Dagli from the Turkish Thorax Society’s Tobacco Control Working Group. The smoking rate rose from 39% to 42% among men, and from 12% to 13% among women. The real alarm, however, concerns the young. Compared to the 2003-2012 period, the consumption of cigarettes and other tobacco products in the 13-15 age group increased by 51% and 88%, respectively, Dagli said.

According to Dr. Oguz Kilinc, a professor of medicine who sits on the Turkish Thorax Association’s executive board, the trend's reversal is due mainly to widespread financial strain among the population, a failure to curtail the tobacco supply and the inefficiency of efforts to reduce demand.

“Turkey is the world’s seventh-largest tobacco consumer,” Kilinc told Al-Monitor. "Income disparities, [social] injustice and domestic problems are the main factors [increasing consumption]. It’s the same around the world. Consumption is high among jobless and struggling people. Poverty is the main reason pushing it up."

He added, “People of higher socio-economic standing smoke less and quit sooner. In Britain, for instance, tobacco control efforts since 1979 show that the smoking rate among jobless and low-income people has remained the same. Consumption declines in the overall population, but remains unchanged among the poor. So for proper tobacco control, the most important thing to prevent people from starting smoking is to put money in their pockets — that is, to increase prosperity.”

According to Kilinc, the government planned to introduce new measures to reduce the appeal of smoking, like black packaging with no brand names inscribed, but backed down at the last minute under pressure from the tobacco industry.

The industry, he said, has now set its eyes on women. “In Turkey, we have a male-dominated society. Men are more inclined to see smoking as something they are entitled to. In fact, it’s the same globally. Smoking increases first among men. Consumption among men, however, has reached a saturation point and will start to decline from now on. That’s why the industry has begun to target women … using colors and packaging that appeal to them. Smoking is presented as a sign of female emancipation and equality with men, as a means of declaring one’s independence,” Kilinc said.

Stressing that smoking among girls in the 13-17 age group has risen from 6.4% to 10.3%, he added. “Future women are growing up as smoking addicts. To make a product out of the tobacco plant, the tobacco industry uses chemical substances and even sugar as additives. Hence, an important measure to decrease the cigarette supply would be to ban those additives and thus reduce product variety. One way to achieve this could be to stop issuing new licenses. No fundamental solution can be found without curbing the marketing network.”

Drug abuse, meanwhile, is also rising. Deaths from drug abuse increased from 136 in 2007 to 232 in 2013, according to figures the Health Ministry gave in response to a written parliamentary query by Mahmut Tanal, a lawmaker for the main opposition Republican People’s Party. Similarly, drug abusers treated in institutions run by the Directorate-General of Health Services increased from 108,687 in 2009 to 276,307 in 2014. Most of the patients were in the 20-29 age group, with men making up 94% of the total. In the regional breakdown, Istanbul topped the list with almost 33% of patients.

Speaking to Al-Monitor, Tanal blamed the worsening trend on insufficient efforts against drug abuse and psychological distress among the young stemming from economic hardships and inadequate education.

The root of the problem, according to him, lies in the failure of the ruling Justice and Development Party (AKP) to draw up proper policies for the youth. “Young people in Turkey have been deprived of an atmosphere of freedom. They easily become addicts when they fail to realize and express themselves. Many are already jobless,” Tanal said. “It’s no coincidence that the number of drug abusers has boomed under the AKP. The government has impoverished the people economically, which leads to families falling apart. The divorce, violence, murder and suicide rates have also shot up under the AKP.”