Iran's latest smoking statistics show the age of beginner smokers dropping to 13, and government institutions have few answers to this problem. 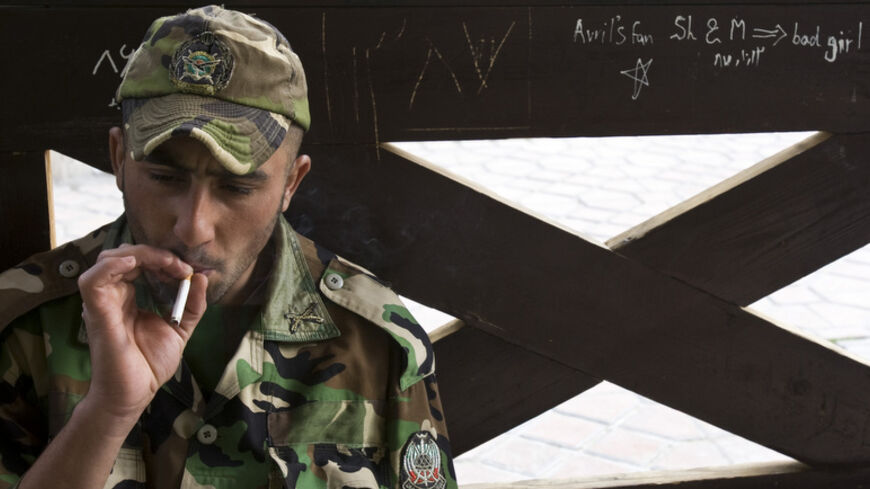 A member of the Iranian army smokes as he rests at a park in central Tehran, April 9, 2009. - REUTERS/Raheb Homavandi

During the same ceremony, Dr. Ali Akbar Sayari, the deputy minister of health in President Hassan Rouhani's administration, said that each year, Iranians spend $3.3 billion on smoking. This is the same amount the Rouhani administration allocated for healthcare in 2014.

Despite the smoking-age drop, there are conflicting statistics regarding the total number of smokers in Iran. Last year, for example, Mohammad Reza Masjedi, director of the Anti-Smoking Society, claimed there were 10 million smokers in Iran — twice the number cited a year later by his colleague Shirazi, a member of same organization. According to Masjedi, 28% of adult men and 3% of adult women in Iran smoke.

Shirzad Abdollahi, a Tehran-based education expert, told Al-Monitor that the drop in the smoking age is due to children having easy access to cigarettes at supermarkets, newsstands and on the sidewalks. "There is no law prohibiting the sale of cigarettes to minors," he said. "The fact that many of them have parents and close relatives who are smokers, that smoking is allowed in all public places, in addition to the absence of healthy alternatives, as well as the inability of the school system to properly educate kids are all contributing to this problem."

A Tehran-based hematologist and oncologist told Al-Monitor, "There is an almost direct relation between the age of the smokers and their overall numbers in Iran. As the starting age for smoking lowers, the number of smokers increases. There is also a similar kind of connection between the average age for developing cancer and the general increase in the number of cancer patients. Of course, the increase in the usage of poor-quality gasoline produced inside Iran is another contributing element."

Given the new generation of younger smokers and the general increase in the number of smokers, the cigarette trade — in both its legal and illegal aspects — is becoming very profitable.

Three types of cigarettes are available in Iran: those produced inside Iran and those legally and illegally imported.

Among the reasons for the increase in sales could be the relatively low taxes on the tobacco industry in Iran. The production tax is only 17%, with only a handful of countries in the Middle East — Iraq, Afghanistan, Libya and Somalia — taxing more. Even Iranian Health Minister Hassan Hashemi has criticized this situation. In a message on the commemoration of the International No Smoking Day, he said, “An increase of 10% in the taxes on the production of tobacco products results in a 4% drop in usage in industrial countries and an 8% drop in countries with expanding economies.”

Based on this, Hashemi asked for a minimum 75% tax on the retail price of cigarettes. But it is not clear whether heavy taxation will have any effect on the cigarette use in Iran. As the head of the Iran National Tobacco Company stated, 55% of cigarettes available in Iran are smuggled and imported via the black market. The black market for Marlboro cigarettes alone is worth $1 billion, though the brand is neither produced in Iran nor available through legal import markets.

Exact details on Iran's cigarette-smuggling networks are unavailable. Understanding the situation is almost impossible unless one has paid close attention to the opinions and analyses of senior political and military characters in recent years.

Around the end of June 2011, there was a period of disagreement between then-President Mahmoud Ahmadinejad and Ayatollah Ali Khamenei over the reshuffling of the minister of intelligence position. This resulted in the arrest of certain members of Ahmadinejad’s entourage by security operatives in the Iranian Revolutionary Guard Corps (Sepah). At the time, the president attended a conference on the prevention of smuggling and illegal foreign currency trade, saying, “Between 55 to 60 billion cigarettes are used in Iran, which is worth about 2 trillion tomans [at the time $2 billion]. Such numbers would tempt smugglers from all around the world, let alone our own dear smuggler brothers!”

It took less than a day for Sepah commander Mohammad Ali Jafari, who considered himself the target of Ahmadinejad’s comments, to respond, “This is a perverse comment that is brought up by the people who, in our opinion, have a vested interest in the issue,” he said, The term “perverse” is usually used by the Sepah and the supporters of Ayatollah Khamenei in the context of describing the political actors around Ahmadinejad.

Exactly 10 years ago, a report published during the sixth parliament and given to Reformist parliamentarians showed that three docks belonging to Sepah in Chabahar, Khur Zangi and Hormizgan, as well as several docks belonging to the national police, were used for smuggling.

Despite the difficulties of regulating cigarette sales, there have been attempts. One Ministry of Health policy is to impose stricter rules on unlicensed individuals and businesses selling cigarettes. Nonetheless, it is unlikely for this policy to take effect in the near future. The chief secretary of the Anti-Smoking Organization called the situation unfortunate, saying, “The Ministry of Industries and Business has not issued a license for vendors allowed to sell cigarettes.”

The administration is also planning to offer free anti-smoking drugs and patches to help smokers find new motivation for quitting. At a press conference, a head counselor at the Health Ministry's Anti-Smoking Society said, “The anti-smoking drugs are currently considered to be among the most essential drugs in the country, but they are still very expensive. Therefore, we have arranged with the private insurance companies to have them extend their coverage to these anti-smoking drugs as well.”