Will regime keep the upper hand in Syrian conflict?

The Syrian army has gained control of the area connecting Moadamiyet al-Sham and Daraya in Rif Dimashq, though opposition figures say the siege won’t last. 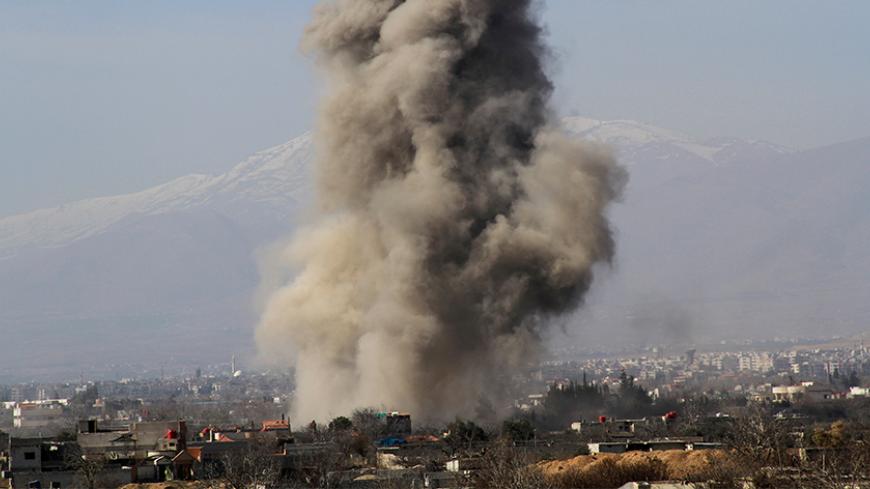 DAMASCUS, Syria — The Syrian regime and its allies have taken control over the entire area between the cities of Moadamiyet al-Sham and Daraya in Rif Dimashq governorate, following an extensive military campaign and heavy aerial bombardment that began in December 2015. The campaign aims to isolate the city of Daraya, which has already been besieged for three years, cutting off the only humanitarian supply line and weakening the opposition and civilians in preparation to storm the city.

However, on Feb. 9, the regime’s first attempt to breach the city failed. The effort was renewed on Feb. 12 from the northwest, near Moadamiyet al-Sham, accompanied by clashes between the regime forces and opposition fighters involving ground-to-ground missiles and 56 barrel bombs.

The city of Daraya is located just southwest of Damascus and borders the Mezze neighborhood, where the presidential palace is located, to the north. It overlooks the Mezze military airport to the northwest and the Damascus-Daraa highway to the east. Daraya is one of the largest cities in eastern Ghouta and was among the first cities to witness peaceful demonstrations demanding the toppling of the Syrian regime in 2011.

The city has suffered from power, water, heating and communications outages since it has been besieged by the regime forces in 2012. The citizens have been burning furniture to keep warm and plastic to extract fuel to run power generators and water pumps so they can grow and cultivate crops for food.

According to the Syrian Observatory for Human Rights, on Dec. 27, the regime forces advanced in the surroundings of Daraya, controlling the border separating Daraya from Moadamiyet al-Sham. The move caused massive displacement to Moadamiyet al-Sham following heavy aerial and artillery shelling, extensive bombardment with mortars and what are believed to be surface-to-surface missiles. The regime forces gained full control of the area on Feb. 6.

The official Syrian news Agency SANA quoted a military source Feb. 10 as saying, “The army and armed forces units have carried out intensive operations on the headquarters and fortifications of terrorist organizations in Daraya, killing 37 members and destroying many of their weapons and military equipment.”

A media source accompanying the Syrian army in its military operations told Al-Monitor on condition of anonymity, “The goal behind the Syrian army's military operation is to fully secure and control the Mezze military airport near Daraya to serve as a Russian base to launch military offensives to the south,” adding, “The siege of the city is the first step toward storming it in order to fully secure the area around Damascus to the southwest.”

On Feb. 8, Daraya’s local council published a report documenting what it called the regime’s violations in the city during January. It read that the regime had targeted the city with 765 barrel bombs, 1,400 mortar and tank shells, nine airstrikes and 124 surface-to-surface missiles. The siege had lasted 1,166 days.

For its part, the National Coalition for Syrian Revolution and Opposition Forces warned in a Feb. 8 statement against an imminent massacre by the regime forces backed by Russian forces and Iran’s Revolutionary Guard Corps against Daraya in Rif Dimashq. The coalition blamed the UN Security Council in particular and held it responsible for crimes against 12,000 besieged citizens, including children and women, according to the coalition’s statistics.

Al-Monitor spoke to Shadi Matar, the media official of Daraya’s local council, who said, “By besieging Daraya, the regime seeks to starve out civilians by cutting off their only supply line from the city of Moadamiyet al-Sham, which agreed to a truce with the regime in January 2013. Moadamiyet al-Sham was also considered shelter for the people of Daraya when the shelling on the latter intensified.”

He added, “The regime forces were able to control the area connecting the two cities, mainly because of the military build-up and the intensified heavy shelling that had been going on for three months, not to mention the regime’s scorched-earth policy. One ought to mention as well that the region is an open area and empty of any forms of construction, except a few buildings, which makes it difficult for the opposition forces to seek shelter.”

Matar added that the Syrian regime controlled the only crossing between the two cities, creating more difficulties for citizens and fighters alike in both areas. He said that the regime has several options now. It might seek to drive rebels and civilians out of the city in an attempt to change its demographic composition, as happened in Homs in May 2014 and Zabadani in August 2015.

Al-Monitor also met with Capt. Saeed Jamal from Daraya, of the Martyrs of Islam Brigade, the largest brigade fighting in the city. It was established in 2013 to counter the regime’s advance in eastern Ghouta. Asked about whether the regime would strike a deal with the militants in these regions to drive them out, Jamal told Al-Monitor, “We have no idea what the regime forces will do, especially after the Russian intervention and the great support Russia is offering to [President] Bashar al-Assad’s regime. We have already witnessed the great scale of destruction of Syrian towns in the north by Russian weaponry under the pretext of fighting terrorism.”

He added, “We will not accept any deal under these circumstances. We remain steadfast and strong on our fronts. During the last battle and despite the regime’s heavy shelling aided by Iranian militias, it could not separate Daraya and Moadamiyet al-Sham for three months” although the area is very small.

Jamal does not believe that five years after the outbreak of the revolution, the regime is making the kind of progress in different Syrian towns that could affect its fate. He believes that what is happening is temporary progress owing to Russian support, but things will soon return to how they were, and probably better.

Jamal said that Russia ought to learn from the lessons and the previous experiences of Iran, which had provided support for the Syrian regime but did not put an end to the Syrian revolution. It has only prolonged the regime’s life and led to the destruction of more towns, more displacement and a higher death toll among the Syrian people.

It is noteworthy that in 2010, Daraya was home to 250,000 citizens, and today that number has dropped to 12,000, including both civilians and military forces. As the road to Moadamiyet al-Sham has been cut off, these people will face worsening conditions as the regime continues the heavy bombardment that prompted people to seek refuge underground.